Connecting the MGO to a structure

As with all connectors, the MGOs are made to be loaded on their major axis and are weaker when poorly positioned.

Risk of the MGO disconnecting

Variable strength loss depending on the angle between the axes of loading.

Risks of rubbing on the gate and the release lever:

Risk of the gate opening and of the MGO disconnecting.

Frontal pressure on the gate:

Lateral pressure on the gate:

Attachment to an anchor that is too small:

The length of the MGO can create a significant cantilever load with a risk of breaking the MGO or loosening the anchor.

This type of anchor almost allows the MGO 60 to move freely, but is tight enough to create a cantilever load in certain cases (e.g. if the user climbs above the anchor and falls).

2. Cantilever load over an edge

In a work situation, attaching an MGO to an upright is a common necessity. This can create a cantilever load over an edge.

In this position, the MGO must be used with precautions:
- beware of the user's position relative to the anchor
- With a Y-lanyard be sure to connect both MGO to the anchor 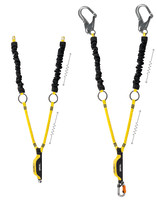