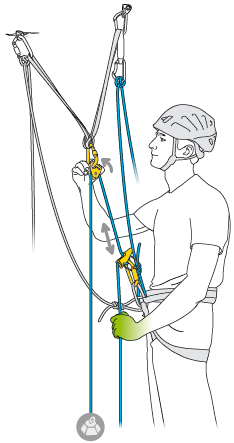 The descent speed must be moderate, to limit the shock load in case the cam re-activates itself.
This can happen in case of vibrations, the cam pressing against the rock or equipment, or due to rope movements.

Warning: the pulley at the redirect point significantly reduces friction (about half the friction of a carabiner). In case of jerks during the lower, the belayer can be pulled toward the pulley, especially if his stance is unstable.