A good choice of carabiner shape can increase ergonomics and security for certain uses.

The shape of the carabiner frame has an influence on:

Positioning of the load in the strongest axis, closest to the spine side of the frame. Suited to simple loads (connection of devices, attachment to the anchor...).

Symmetric shape for even loading (devices with a large attachment hole, pulleys...). 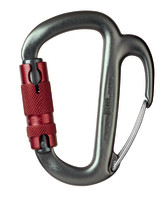