Lionel has been skiing peaks in the Alps for twenty-five years. He lives at the foot of the Belledonne range in the French Alps and knows every corner of the mountain. It's where his gaze naturally turns when looking to plan a fun day of ski touring in a place where there is a lower risk of unexpected hazards. Lionel tells us the story of a day in those mountains.

Avoiding unpleasant surprises on the slopes

It's the beginning of December 2019, the French massifs of Isère are already covered in a thick blanket of snow, and without hesitation we can begin frequenting the mountain for early season ski tours. I'm a math professor and to balance my work with my passion for the mountains, I often go out before or after class when the conditions are good. When that's the case, I'm tight on time and I know it's better to play it safe and stick to familiar terrain. On this particular day, with only three hours of class in the morning, I can start a tour in the early afternoon. But there's no time to waste because the sun sets early this time of year. It's for this reason that nothing is left to chance. I've already skied the couloirs west of the Grande Valloire twice. The elevation gain is still difficult, but I know the route well and manage to do the ascent quickly. Knowledge of the terrain is essential for this kind of tour! 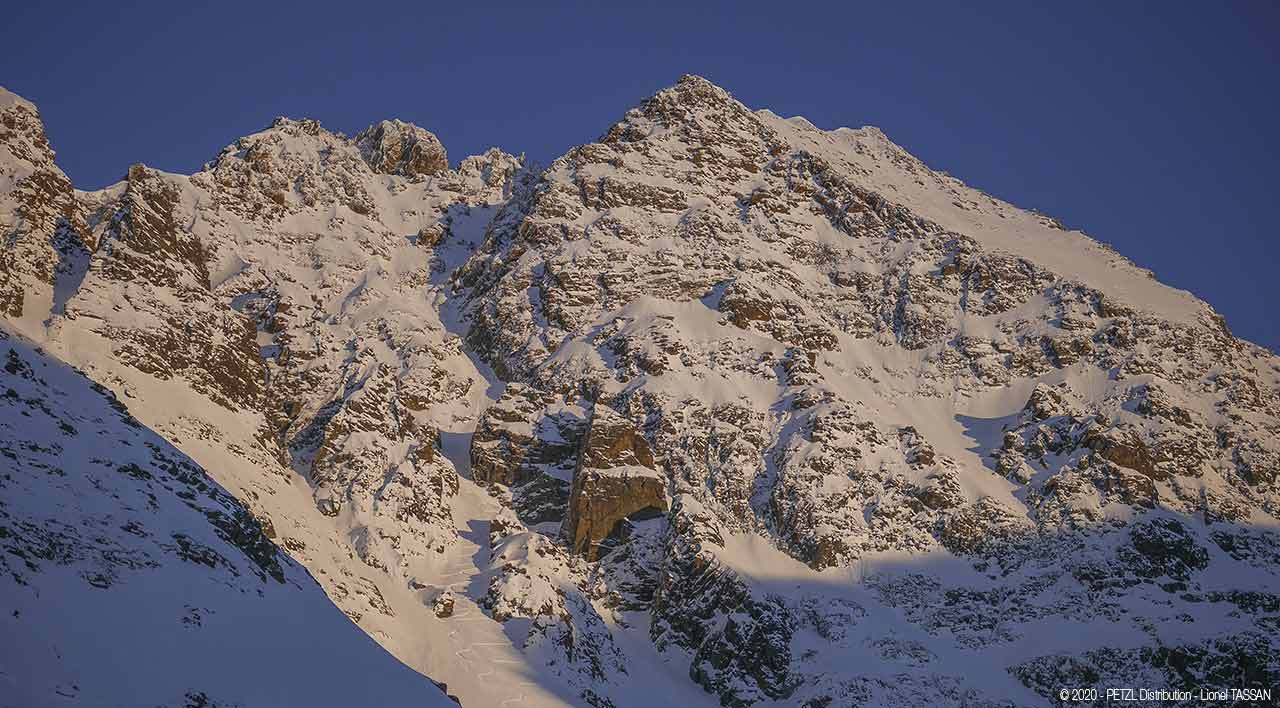 The western face of the Grande Valloire

Gear: Leave nothing to chance

My arsenal of gear was prepared the day before and loaded into the car when I headed to work at the high school. Other than the ski touring essentials (skis, skins, boots, beacon, shovel, probe), it's important to include accessories that make progression in the couloir safer. A pair of aluminium crampons will suffice with the deep snow and the LEOPARD crampons do the trick! At just 300 grams, it's easy to forget they're in your pack. The small RIDE ice axe (250 grams) fits nicely on the outside of the pack; You never know, at the beginning of the season there's always the possibility of encountering short, steep and icy sections. And of course, we can't forget to protect our heads; a helmet can be your saving grace in case of a fall or ice falling from above. And not just while in the couloir. It's the beginning of the season and even on seemingly friendly terrain, no one is immune from taking a tumble or coming across hidden rocks. The METEOR helmet is certified for ski touring and being lightweight, it's easy to carry on your pack while ascending on skins. It's standard equipment for tourers. Additionally, it's good to bring along a headlamp. Considering the time of year (December) and the start time (afternoon), there's a good chance that the skiing will end at dusk, returning through the forest. The small SWIFT RL headlamp is perfect to have in your pack just in case, weighing less than 100 grams with brightness up to 900 lumens. 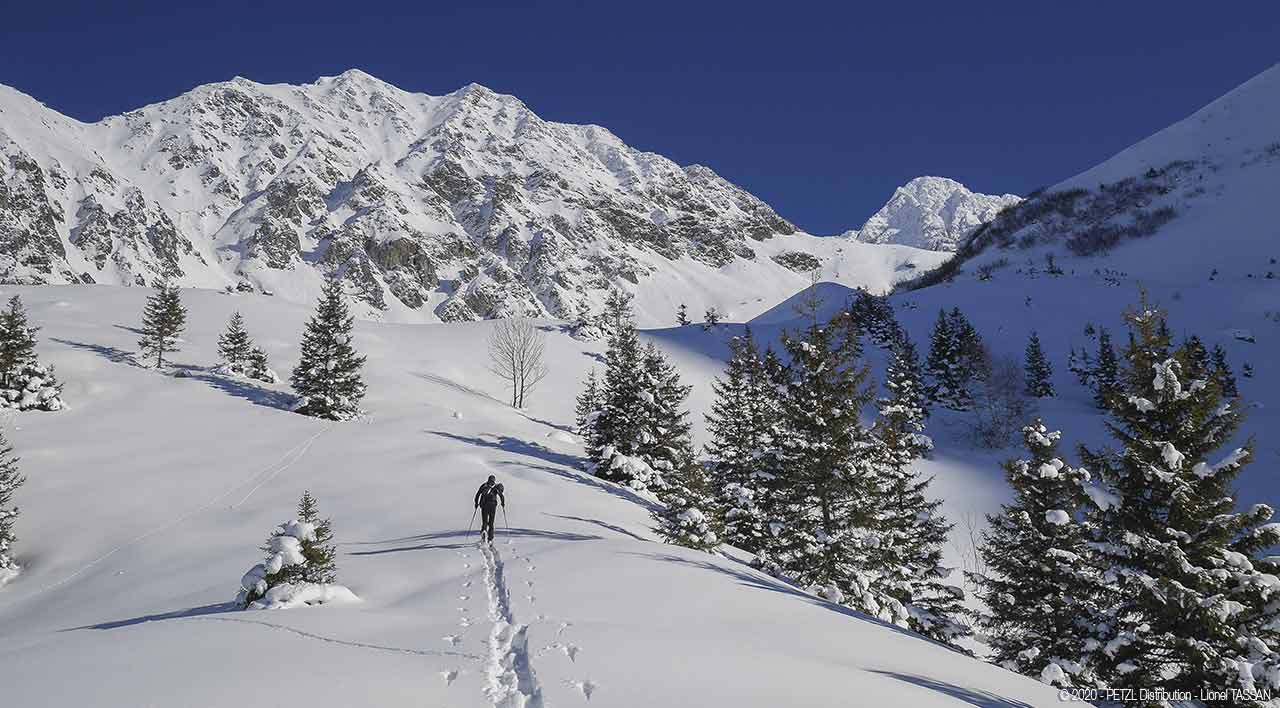 At the end of the forest, a wide track begins.

Making tracks with the experts

Shortly after setting out, we get on-route. Even remaining close to Grenoble, we gain enough distance to find a bit of solitude. Snowfall and a ski tour mid-week and you can be almost almost certain you won't run into another soul. Julien and Nicolas are no strangers to the sport. Nicolas has more than 20 years of skiing couloirs behind him and was one of the first to switch to wider touring skis in the early 2000s when “matchstick width” skis still dominated the sport. Often with his camera in tow, Julien is a photographer, reporting on athletes like Paul Bonhomme. When time is limited, it is important to be with the right people. The members of this small team are not your modern free riders, but they are experienced and prepared to take on this tour with enthusiasm and in excellent safety conditions. 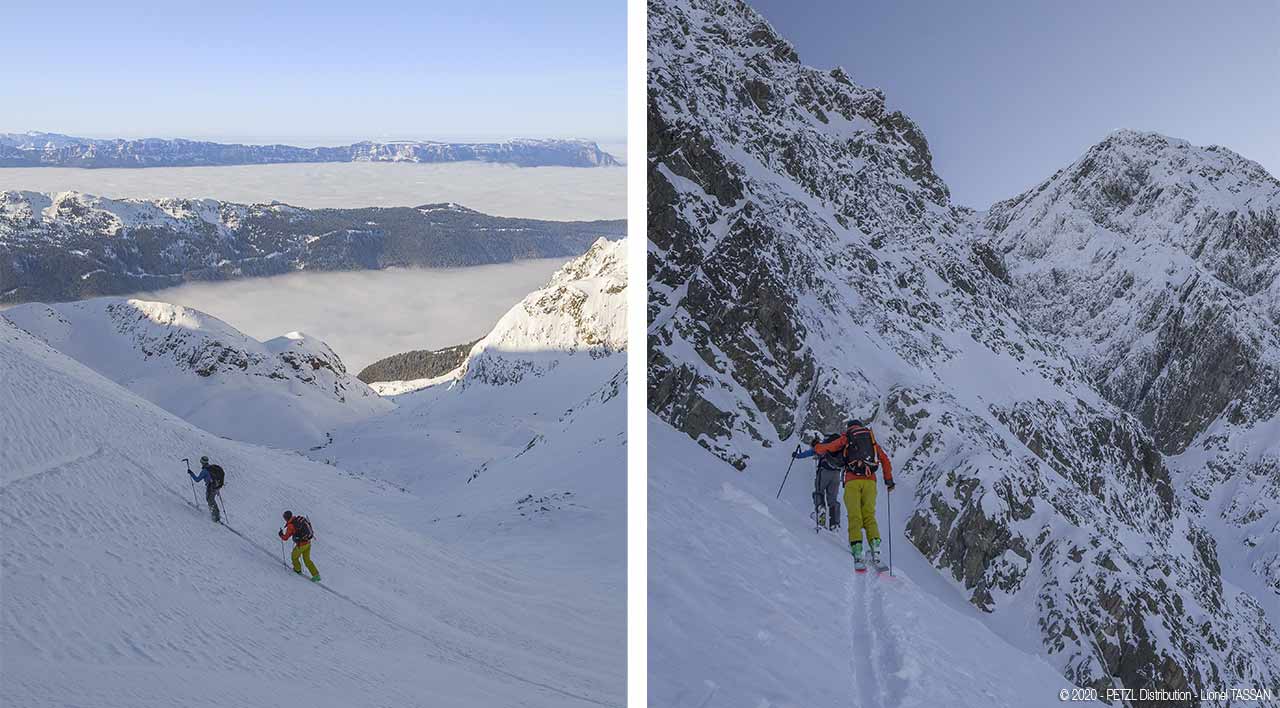 Above Lake Blanc, winter in the Arguille Valley
Taking on the cone of the west couloir, below the Rocher d'Arguille

Climbing the couloir: a ritual!

After departing in the sun, we find ourselves in the cold depression above Lake Blanc, beneath the Col d'Arguille. We add another layer of clothing as the snowpack thickens. In the cone that supports the couloir, the ascent becomes exhausting and we wonder if we'll have to switch to crampons and ice axes further up. We get our answer shortly after...and it's like we are swimming in the deep snow. It's better not to glance down at the watch and to see how long we have been climbing. We might ask ourselves why we suffer hours of ascending for a ride that only takes a few minutes to go down. We try a few strategies to help us stay on the surface: zigzagging left and right in search of harder packed snow, crawling on our knees, plunging our poles into the snow trying to get some support. The crampons and the ice axes remain in and on the pack. In these conditions where the snow is waist-deep, flippers might have been more useful. In the second part of the couloir, a central channel has formed from small purges of surface snow, finally allowing us to take steps without sinking. We have a good rhythm now but exhaustion is setting in as the sun gradually lowers. 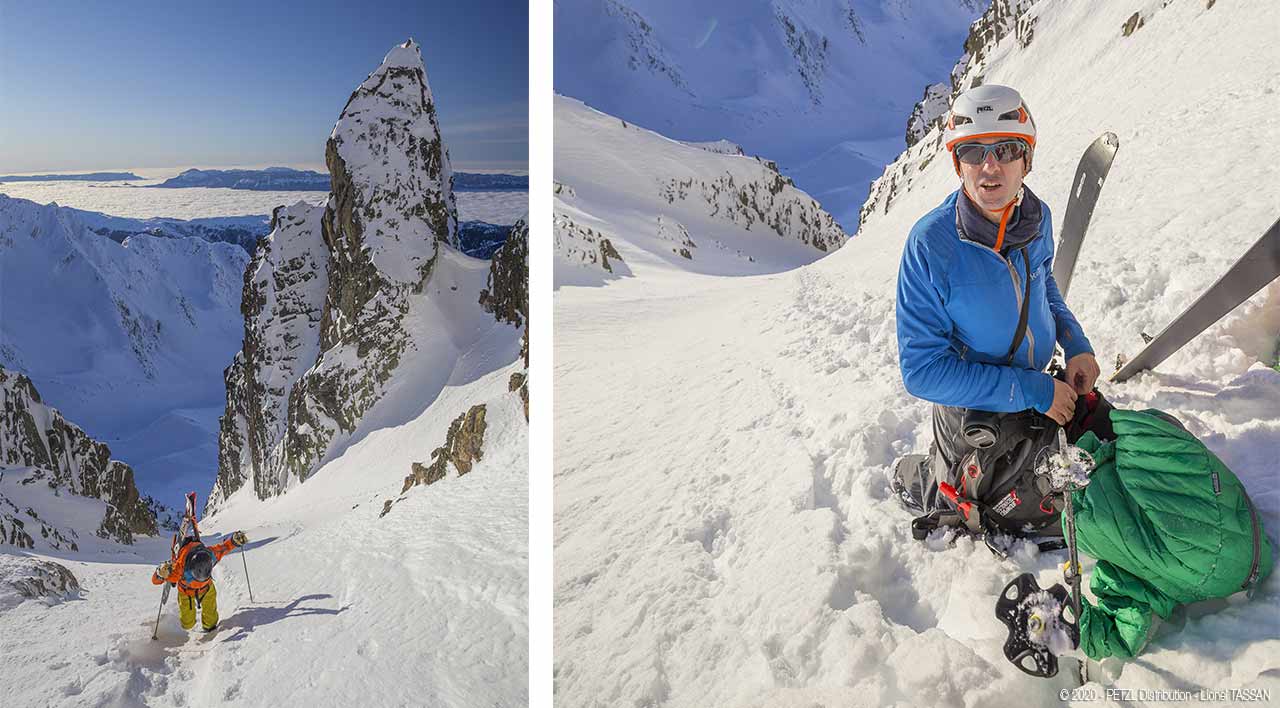 Climbing the couloir, a central channel provides more solid footing
Julien in the upper part of the couloir, bathed in sunlight

The essence of ski touring: the couloir and the light!

The light takes on a golden hue, and in the distance, a sea of clouds encompasses the Grésivaudan Valley, revealing the splendor of these mountains. Despite the difficulty of the upper couloir we are now reminded, if ever we forgot, what we've come for: the joy of spending a day with friends in a dream-like landscape, without the stress of avalanche risk or a steep face. Our experience allows us to maintain a wide margin in this kind of couloir and to appreciate the stability of the snow. And the beauty around us is magnified by the waning evening light.

At 4 p.m. we stop several meters from the summit. We begin to see rocks protruding from the snow in some places and we're moving at a snail's pace over the gritty snow covering the rocks. Finally, it's time to ski. With only half an hour before sunset, there's just enough time to eat a quick bite and prepare to drop in. Admittedly, I enjoy the sights as much as the skiing. In this light, the tour takes on a whole new dimension. Even though we have often skied at sunset, we never tire of the beauty. 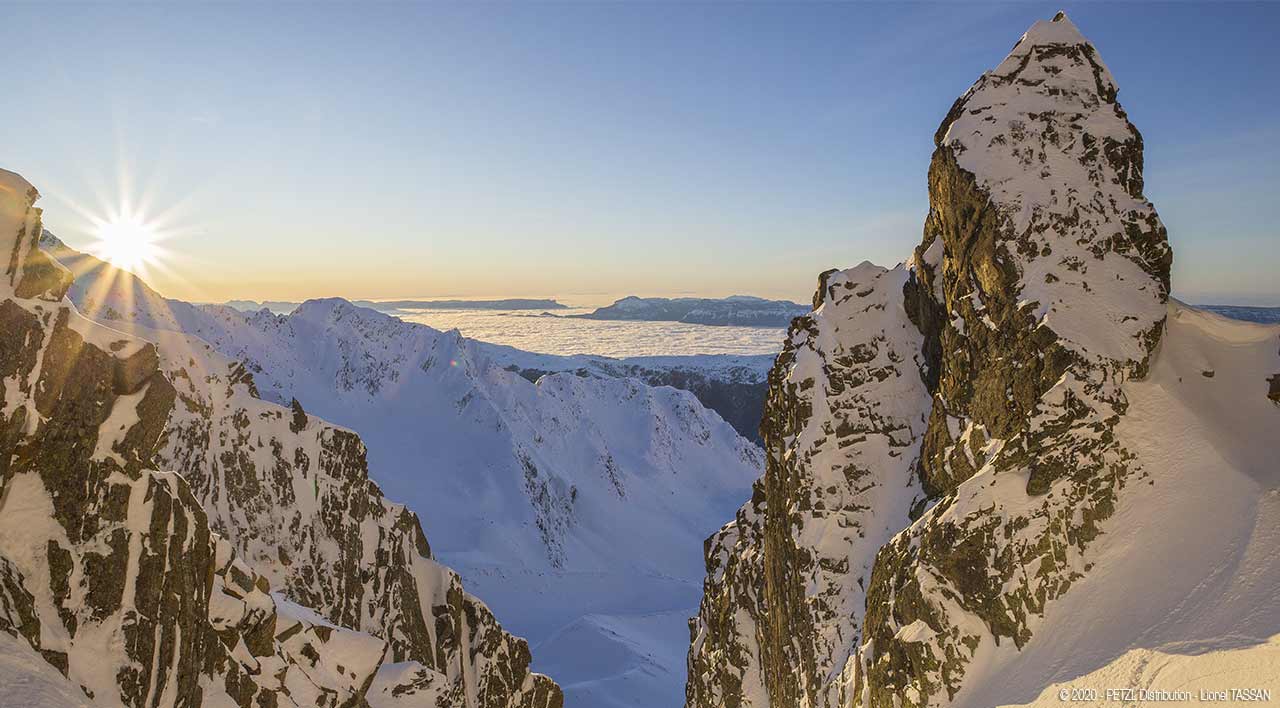 Safety to the end

The next half hour, the waning light of dusk is enough to ski the couloir and reach the edge of the forest, without artificial light and with caution. We're aware that if a problem were to arise at this hour, the rescue would take place in the dark and in the cold. During the descent, we must maintain control. We know the snow is stable and it's now up to us to exercise the necessary caution to avoid an unpleasant surprise by skiing too hard.

The descent meets all of our expectations and the scenery makes it even more incredible. Julien and I take the time to get some shots of Nicolas, as we bark orders at him. “Turn there, veer to the right here!” We savor the last moments of soft evening light and immortalize them. At 2,700 meters (8,858 feet) and with a western aspect, the snow in the couloir is excellent. In December, the snow doesn't budge and only the wind poses a risk of worsening conditions. 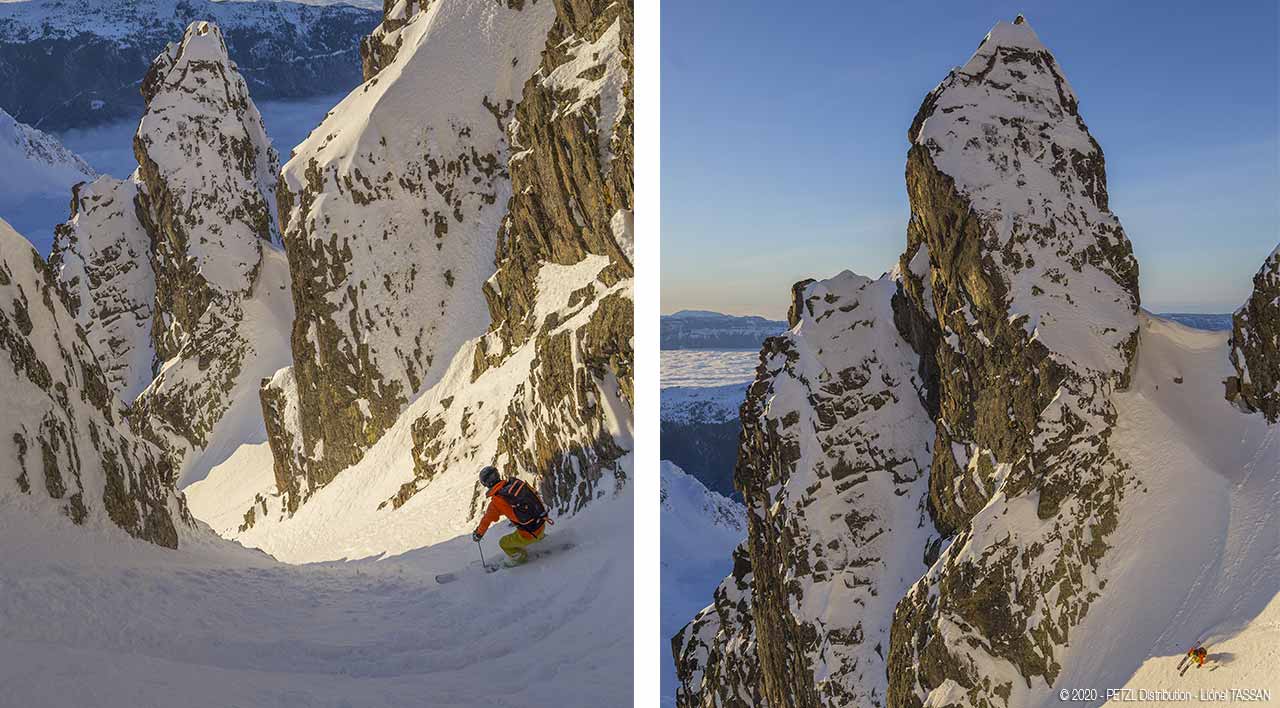 Skiing the western couloir of the Grande Valloire

At the bottom of the couloir, we come back into the shade and the paparazzi let up. Our turns get longer, punctuated with the whoops and hollers of pure bliss and of snow in the nose. The trio flies down the Combe de la Grande Valloire and basks in the last rays of light in the small nook below Lake Blanc, which has disappeared under the snow and ice. A bit of slalom in the cool air, passing under the trees, bringing our beautiful day of ski touring to a close, just a stone's throw away from home. All that's left is to retrieve our approach shoes and make our way back down the narrow trail, led by the light of our headlamps, but with stars in our eyes! 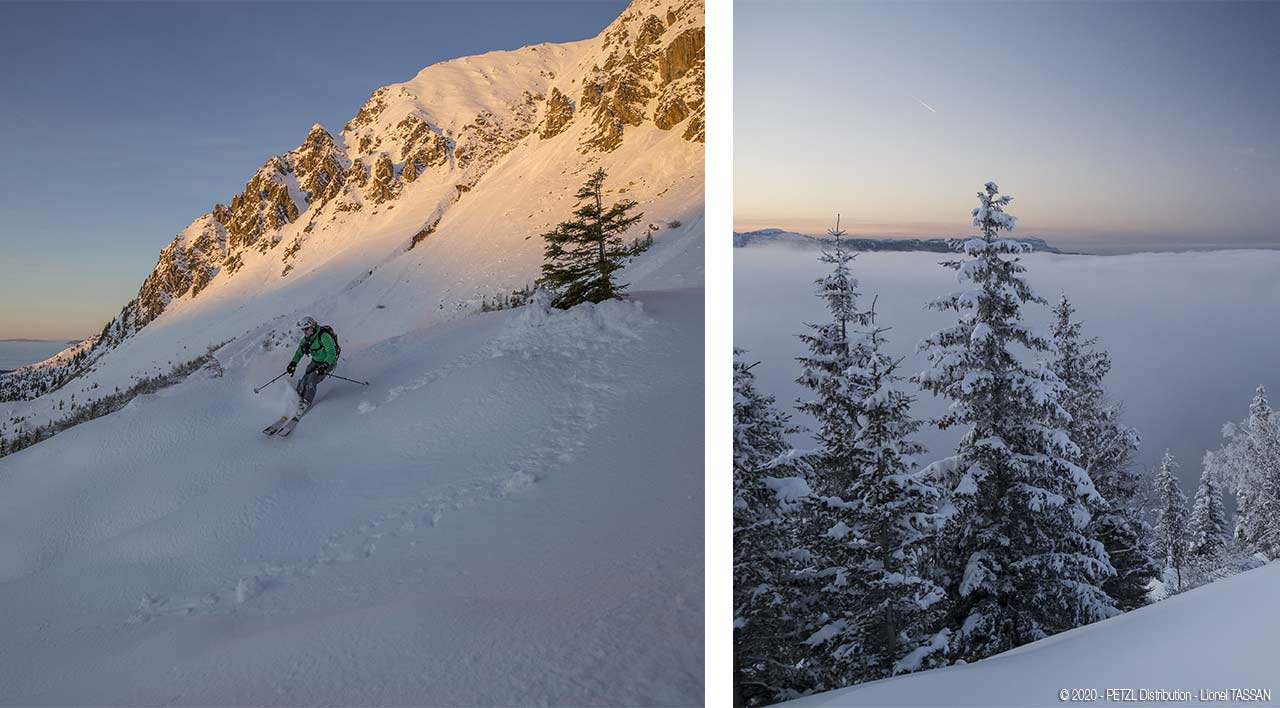 As the sun sets for good, the final turns before diving into the forest

• Headlamp for the return