On August 9, 2018, Brit Tom Livingstone with Slovenian Ales Cesen and Luka Strazar successfully climbed Latok I from the North side. With its 2,400 meter high wall, the North ridge of Latok I has been a coveted climb for forty years and been attempted multiple times. A great success for Tom on his first expedition to the Himalayas. 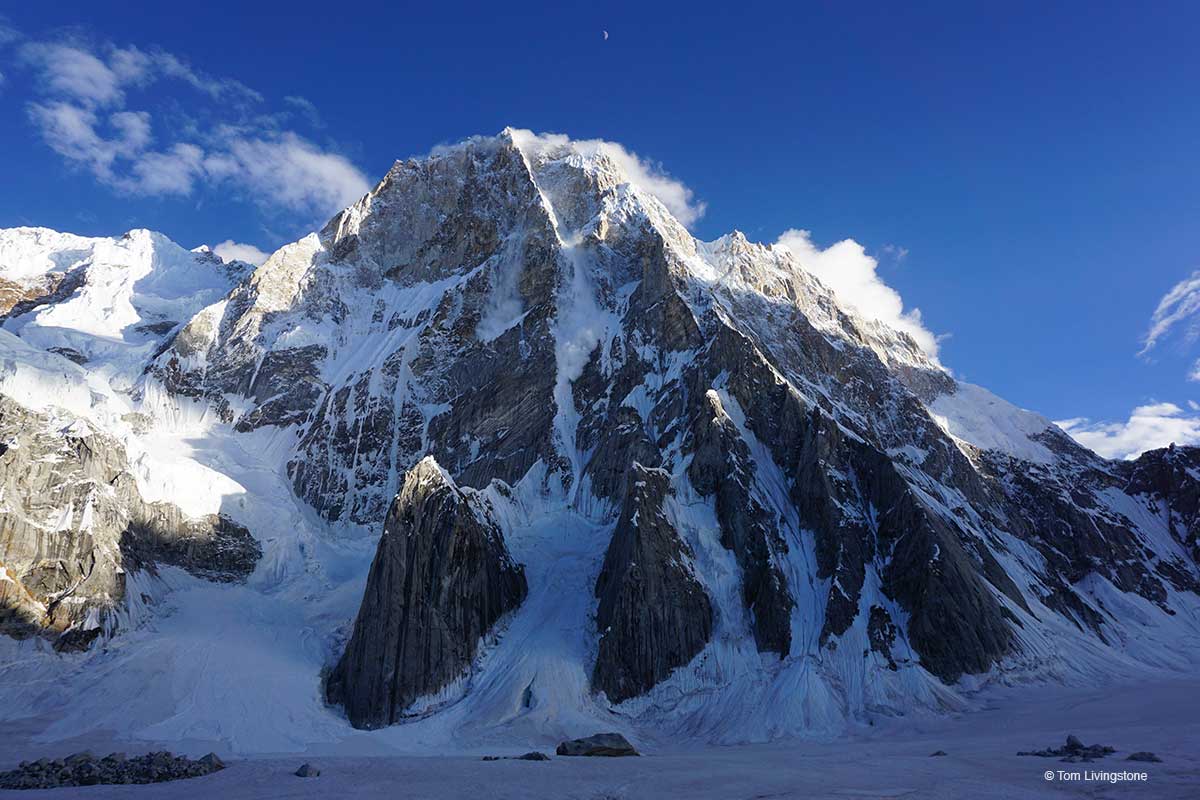 Imagine two Walker Spurs, one on top of the other, with the summit at 7000 meters…. In the Karakoram, the peaks in the Latok group have beautiful summits and share a common feature: they seem inaccessible. Latok 1, the highest at 7145 meters, has only been climbed once before, from the south in 1979, by a Japanese expedition led by Naoki Takada.. But the relentless North face has resisted no less than thirty recorded attempts on the two and a half kilometers of mixed and ice climbing.

The most beautiful attempt was one of the first in 1978. The work of four Americans, Jeff and George Lowe, Michael Kennedy and Jim Donini. The first three were regulars from Alaska and Donini is one of the team completing the first ascent of Torre Egger. Long hair, zero weather reports and no desire to use siege tactics: the four men opted for capsule technique on the North ridge, which rises from the Choktoi Glacier. They endured a storm, and had to retreat only 150 meters from the summit. 85 abseils, twenty-six days later and a lot lighter, the four friends are down. A myth is born: the Northern side of Latok 1 becomes one of the "great problems” in the Himalaya. Dozens of attempts will follow, by the best mountaineers of the 80's, 90's, and 00’s including Rab Carrington, Martin Boysen, the Benegas brothers, and more recently Colin Haley, Luka Lindic and Thomas Huber. But each time, Latok 1 slams the door to the 'Who's Who' of mountaineering. 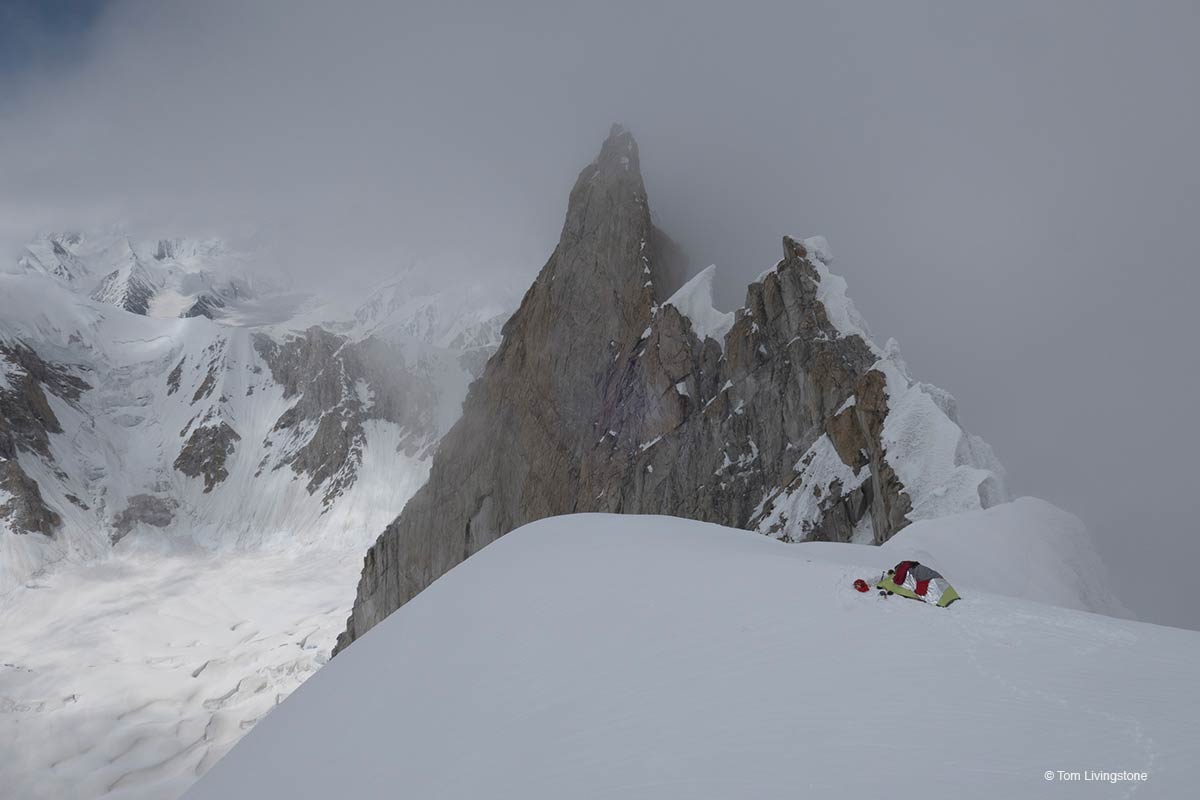 Tom Livingstone and his Slovenian companions had no idea that as soon as they arrived, a Russian team would already be setting off on an attempt on the famous North Ridge, the most obvious line. Serguei Glazunov and Alexander Gukov were caught in a storm high on the ridge and retreated. Glazunov died and Gukov was finally rescued by Pakistani Army helicopter six days later. "Everyone knows that the northern side of Latok 1 is one of the great challenges of the Himalayas.The idea came from my Slovenian friends. I met Luka Strazar a few years ago in Scotland where we become friends. We have the same outlook on the mountains and the same sense of humor! We stayed in contact and last winter they invited me to join them on their Pakistan trip in summer 2018. I went to climb in Slovenia, where I met Ales Cesen. We had a good laugh when we talked about Latok, but to be honest, I have to say that before the start I thought our chances of success weren’t super high. So many teams have tried it, and so many stars have to align. That’s just the way it goes in the mountains." Once at base camp, after the Glazunov accident, Tom Livingstone and the Slovenians decided to continue with their climb. "We were of course affected by what we saw, the three of us wondered if we wanted to try the ridge anyway." Three days after Alex's rescue, the mountain was in reasonable condition after the recent bad weather, and we made the decision to go." The trio left at one o'clock in the morning on August 5th. "The conditions were good, the couloirs were often firm and there were a few steep and hollow ice sections, but it went well. The climbing was varied and sustained, always interesting. It is difficult to give a grade, but we estimate it to be ED + It was also necessary to bypass snow mushrooms, even if in terms of technical difficulty it was not super hard, the length of the route, altitude and lack of sleep made it very difficult.”
Three quarters of the way, under a steep headwall on the ridge, the trio chose to make a crossing to the right to join the west col, between Latok I and Latok II and to exit at the top by the southern slope. A route that avoids the last part of the ridge but a clever choice, and that gave them the summit. For Tom Livingstone, bypassing this last section of the ridge allowed him to save some effort for the final push. "Our priority was to climb Latok 1 from the North side, via a safe, fast and alpine-style route. to succeed in following the whole ridge only a secondary goal. We had this idea of crossing right and ending up on the southern slope from the beginning; we knew the last section of the north ridge would be expensive in terms of effort and time." says Tom.
On August 9, Tom, Ales and Luka were happy to be at the top of Latok 1, "in typically Scottish conditions”, they returned to base camp two days later immensely happy. "We were lucky, we had a nice weather window and formed a great team.” 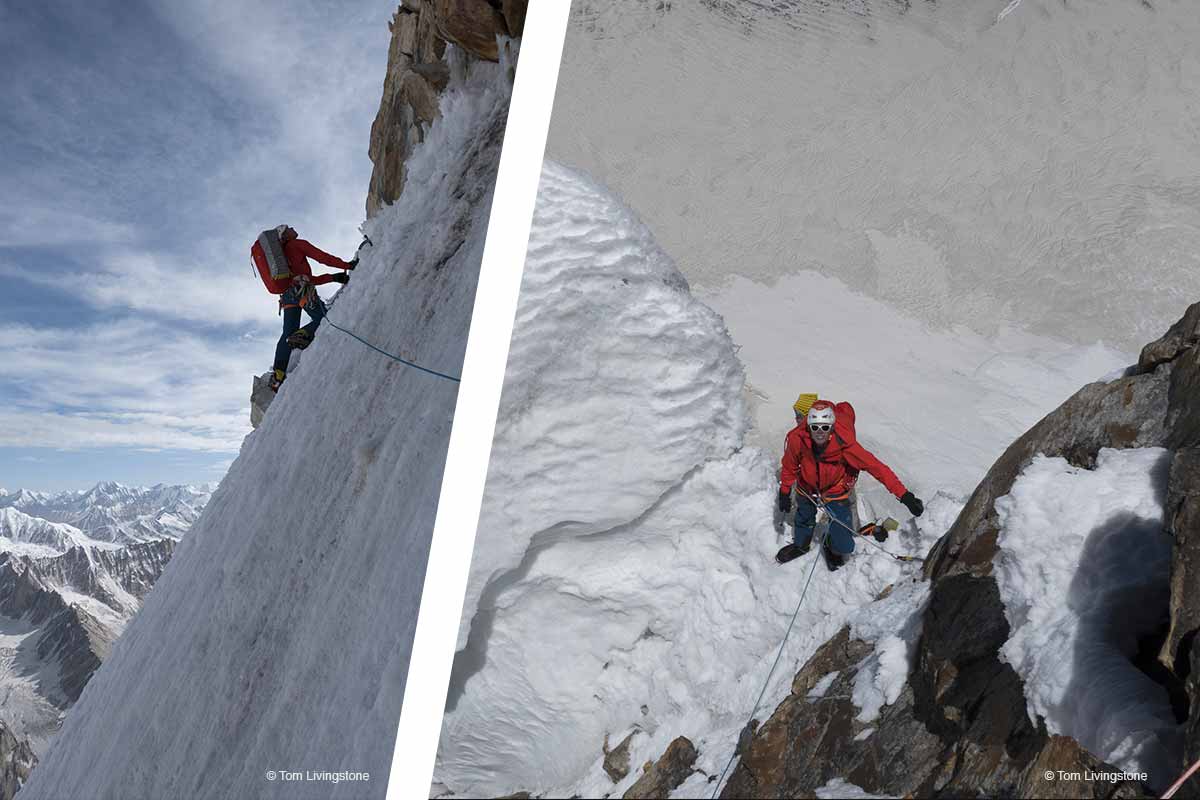 The Members Of The Expedition

A member of the Petzl UK team, 27-year-old Tom loves climbing on the British sea cliffs, and has a passion for mixed, with successful ascents of routes such as 'The Secret' IX 9 in Ben Nevis or Cracking Up, IX 9 in Wales. Tom has considerable alpine experience, with ascents of classics in The Alps (Divine Providence - Mont Blanc, Winter Walker Spur -Jorasses, Lesueur - Les Drus) along with trips to The Rockies (House / Anderson - Mt Alberta) and a first ascent in Alaska's Revelation Mountains (Fun or Fear, Mount Jezebel) with the Scottish Uisdean Hawthorn, last April. As for Tom's companions, Slovenian Ales Cesen, 36, has a long list of major climbs to his credit (first on the north face of Hagshu in India, northern summit of Gasherbrum IV). Luka Strazar has among other things climbed the first ascent of the West face of K7 West (with Nejc Marcic in 2011).

What to Pack - Tom's Bag For Latok I 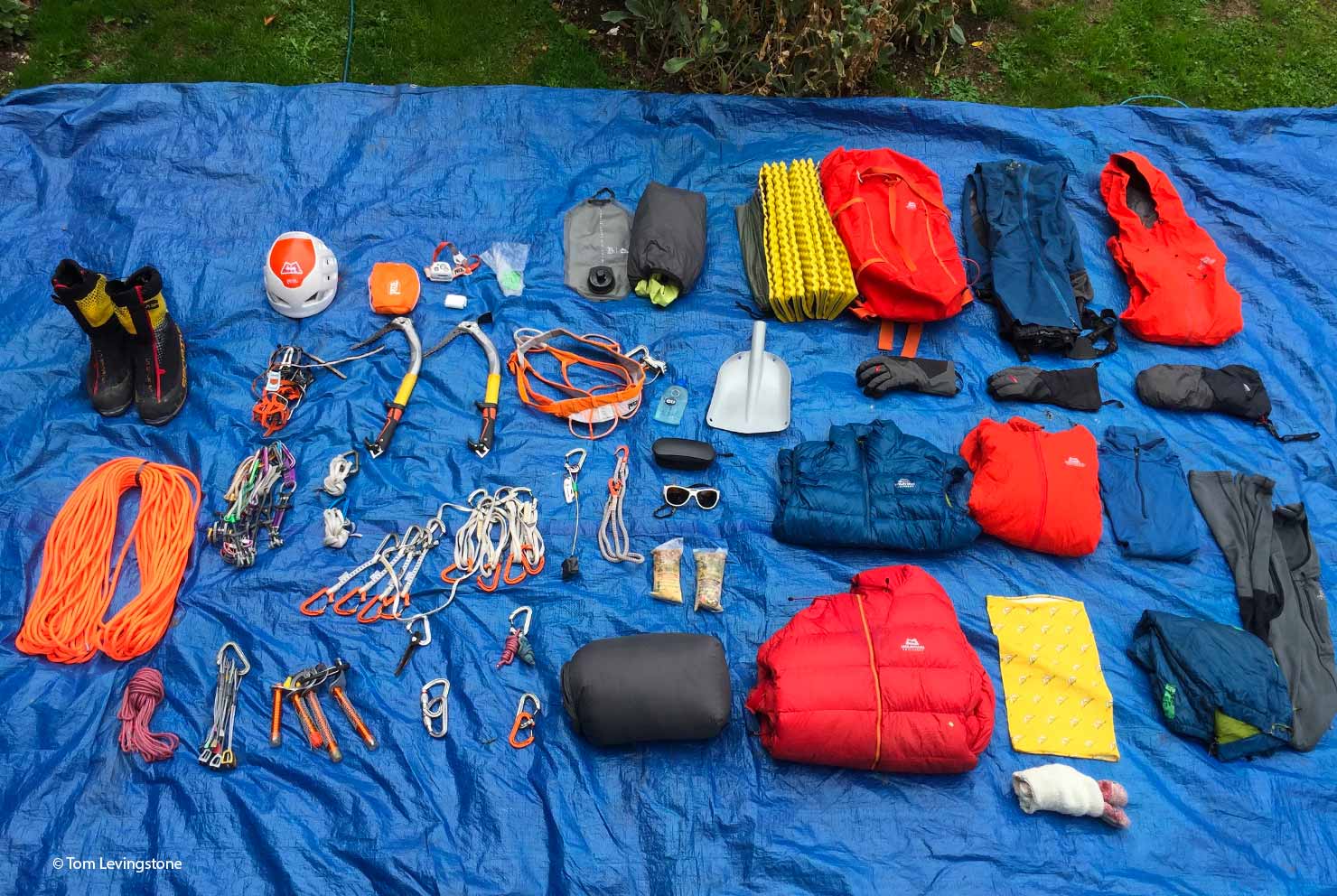 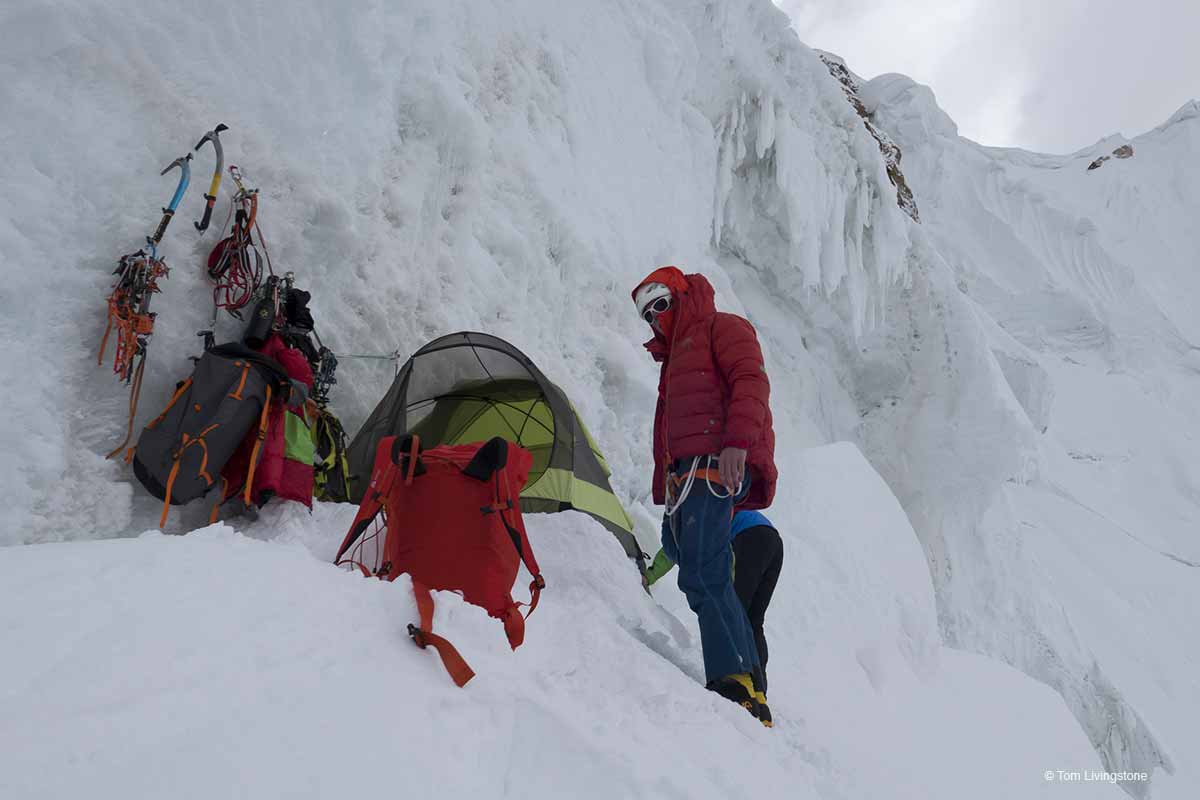 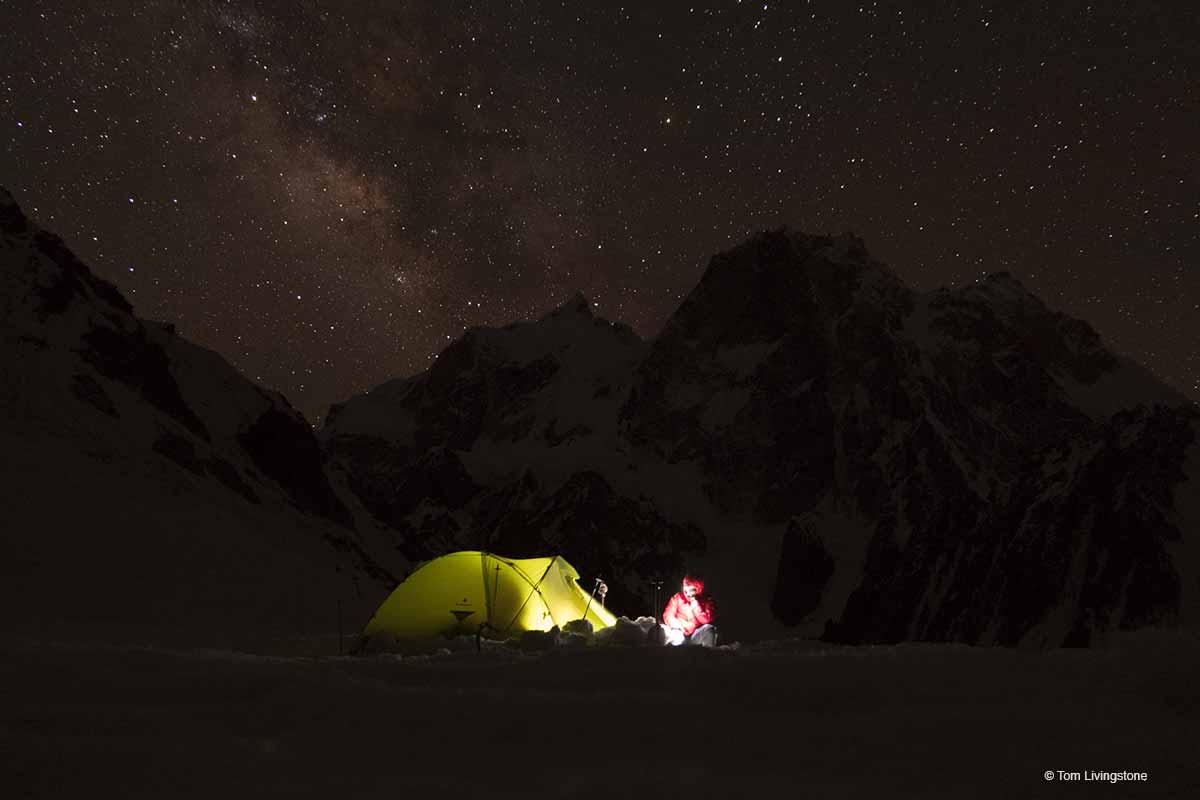 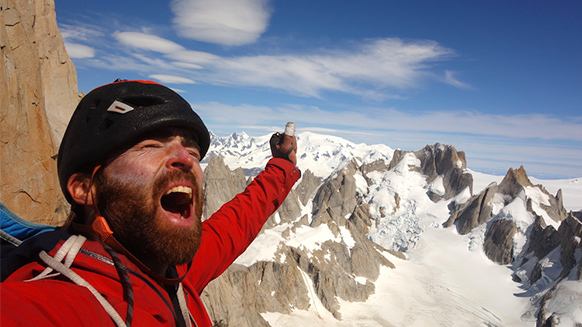