Release and rescue of a co-worker using a rescue kit

Having rescue kits at the work site enables a rapid response among team members.

Depending on the work situation and the established rescue plan, the rescue kit may be pre-installed on an anchor or placed in a location that gives workers the quickest access.

Setting up a specialized rescue kit with JAG SYSTEM and I'D 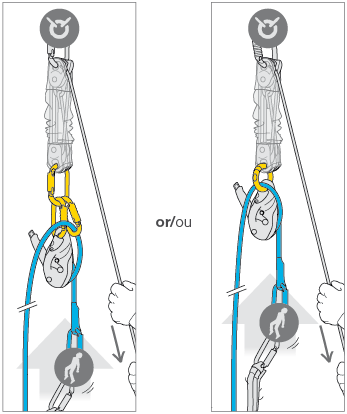 The JAG SYSTEM is a hauling kit with optimal efficiency and compactness. Its cover prevents the haul rope from tangling.

To minimize the risks of mishandling, JAG SYSTEM and I'D can be connected with a RING OPEN, and the I'D can be permanently mounted on the rope, with the safety gate locked by the screw as described in the Instructions for Use.

Verify there is a knot in the end of the rope (at bottom of bag) and that the rope length is suitable for the situation.

Whatever the equipment chosen, rescue kit usage should be planned and governed by the on-site rescue plan. Rescue implementation will vary according to the work situations, the equipment used by the victim before falling, and the victim's condition.

The rescue kit can be used differently depending on the situation:

The type of support on which the victim is suspended can complicate rescue maneuvers.

- If the victim fell on an energy-absorbing lanyard, on a work-positioning lanyard or close to the anchor on a rope, the victim's weight has little effect on the support. Release is fairly simple: see the chapter on Release and rescue of a co-worker suspended on a static support.

- If the victim fell on a long length of rope (more than about 20 m), there is significant rope stretch due to the victim's weight. The rescuer's actions must take into account the effects of elasticity at the moment the victim is released: see the chapter on Release and rescue of a co-worker suspended on a long rope.