For the past five years, the Sevastopol Mountaineering and Climbing Federation, in partnership with Petzl, has organized a mountain rescue festival and competition. Every year the competition has become increasingly sophisticated, with harder rescues to perform, as well as more and more participating teams. For the last couple of years the competition took place near Parus, in the Crimea. 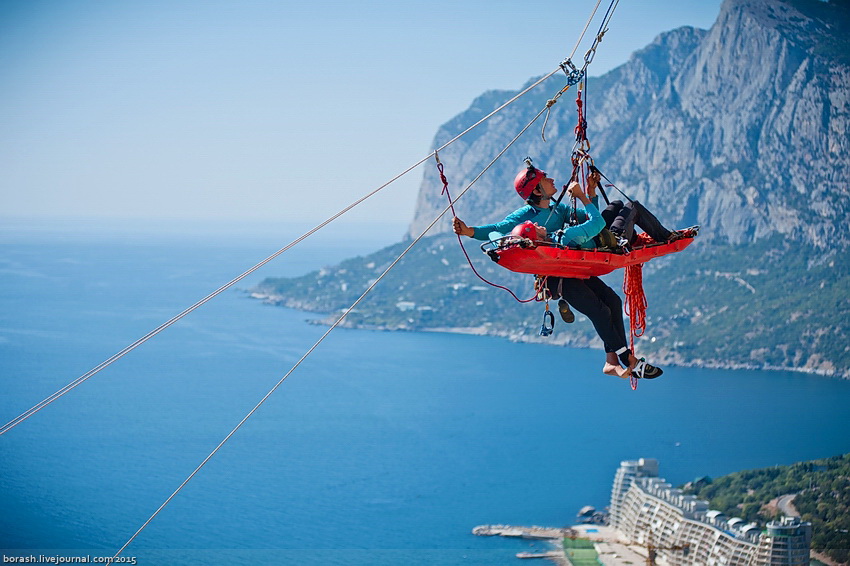 This year, the competition was held from September 18-20, in Laspi, along the Black Sea. More than 100 meters of overhanging cliffs gave us the opportunity to challenge participating teams with long, complex, and thought-provoking rescues. 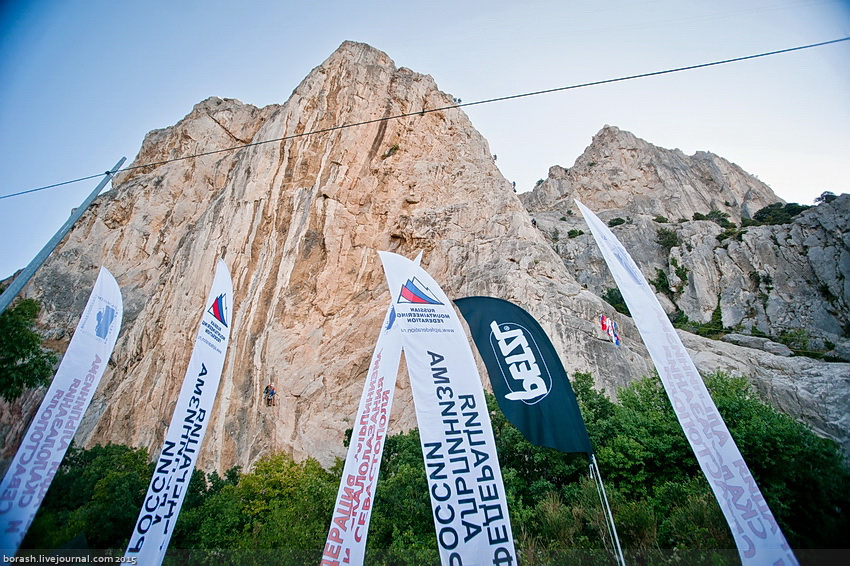 In addition to the team event there was an individual competition to demonstrate alpine self-rescue and caving rescue proficiency using single rope techniques (SRT). To improve the individual skills of attending rescuers, the Sevastopol Alpine Club organized a week-long training camp for small groups prior to the event.

Event partner, Petzl Russia, offered all participants the opportunity to see and test new Petzl products. Petzl also provided participants with any gear they needed for the competition. Several competitors enjoyed using the new adjustable DUAL CONNECT ADJUST lanyard, which allows you to adjust your position at a belay station. It also makes for easier transitions during rappels.

The competition started on September 18. Eleven rescue teams from different parts of Russia came to participate in the event: 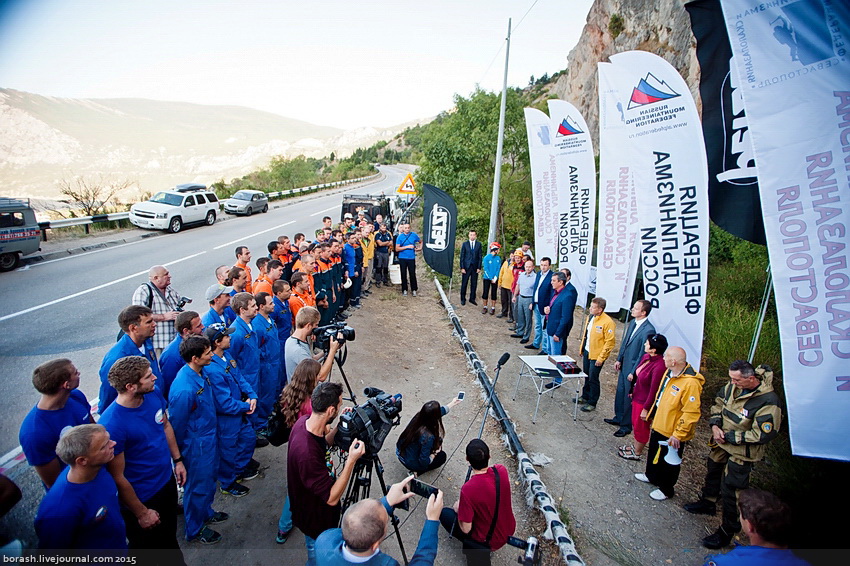 The competition rescue scenario was the following: one injured climber located 70 meters above the ground on an overhanging cliff. The rescue team had to ascend to the top of the cliff using fixed ropes carrying all of their gear and the rescue litter. Then they had to lower one rescuer with the litter to the climber, raise the litter with the injured climber to the top of the rock, and then lower the victim down to a marked point on the ground. Once on the ground teams hurried back to the starting point to finish the challenge. 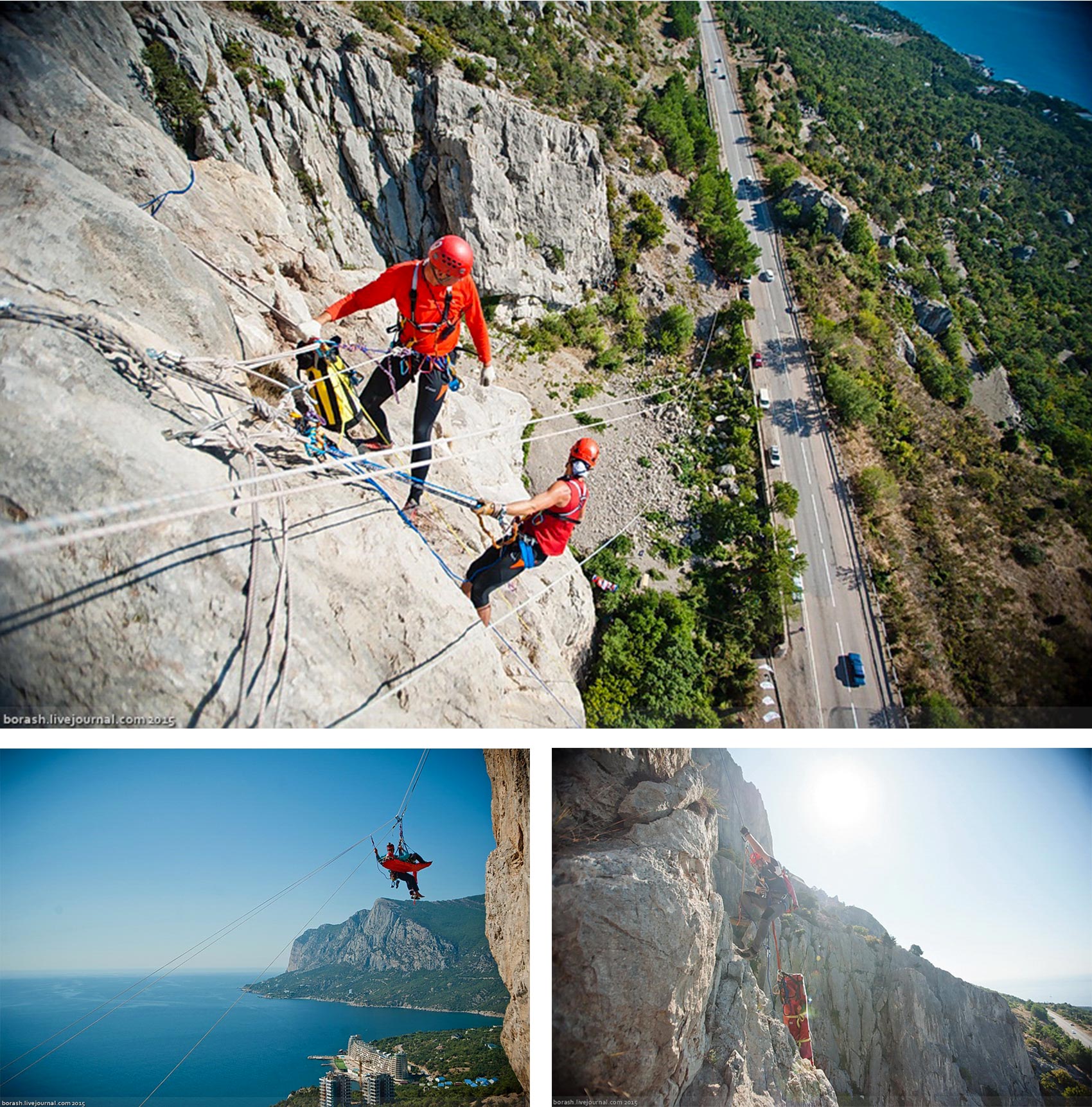 When the clock started, each team had 2 hours to lower the victim to the ground and get back to the starting point. If time expired, the victim was considered deceased and rescue operations over. If this occurred the team was eliminated from the competition. 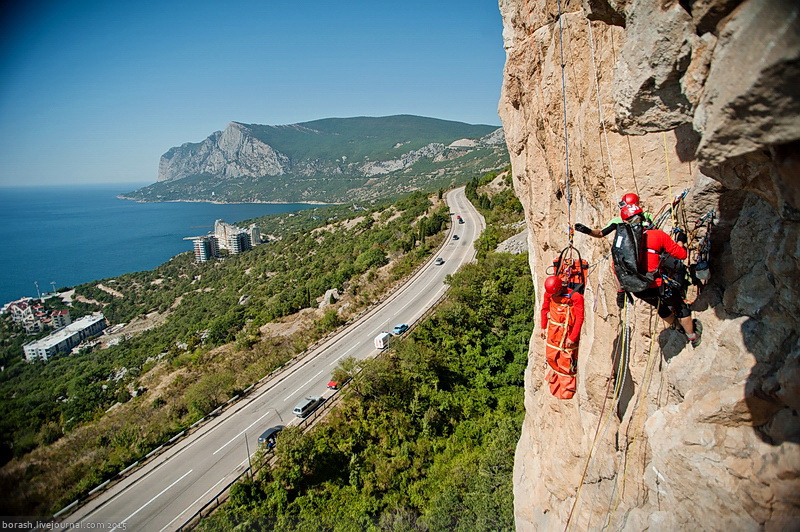 Each team decided on what rescue tactics and techniques to use. The victim could not help with the rescue in any way. There were enough judges to oversee each rescue, to make sure everyone played by the rules, and to ensure all operations were conducted in a safe manner. If a team did anything considered unsafe, they were stopped by the judges to correct their errors. Several stopwatches were used for timekeeping.
Before the starting, the teams went through a thorough equipment check. Each piece of equipment had to be in good condition and certified.

The competition lasted two days, starting early in the morning on the first day and ending in the evening, before dark, on the second day. Two out of the eleven teams proved unable to complete the rescue in the allotted time. The rescue team from Sevastopol put their top-notch skills on display. They employed the most up-to-date techniques, using a winch and a Petzl Nest rescue litter, donated to the team of mountaineers from Moscow. The litter with the injured climber was always placed in a horizontal position. All maneuvers were completed precisely and quickly. Maintaining the litter in a horizontal position is more difficult than in a vertical position, but the horizontal position is much more comfortable for the victim.

In spite of their precise technique, the team from Sevastopol was relatively slow to rappel down from the top of the cliff with all of their gear, finishing in a respectful third place.

The rescue team from Simferopol worked very quickly, but the victim actively helped during the descent. Although they should have been disqualified, the judges decided to let them off easy with only a yellow card. The team finished in second place.

The undisputed competition leader for several years now has been the search and rescue team from the Samara region. They completed all rescue maneuvers with the utmost precision and speed. 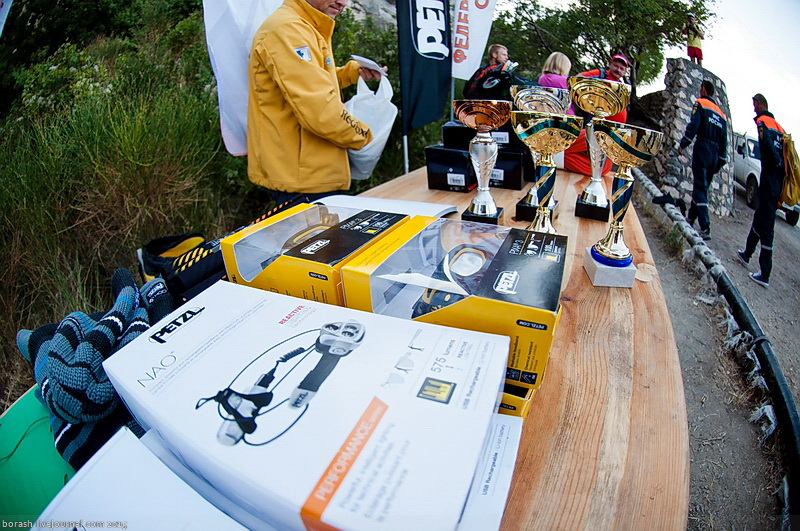 Winners received prizes and gifts from the Russian association of Rescuers, as well as headlamps from Petzl – both the ULTRA VARIO and NAO to conduct nighttime rescues. The Sevastopol rescue team already uses NAO headlamps, and they confirm that this headlamp greatly simplifies nighttime searches for lost or injured people. The winners were also presented with watches from the governor of Sevastopol. 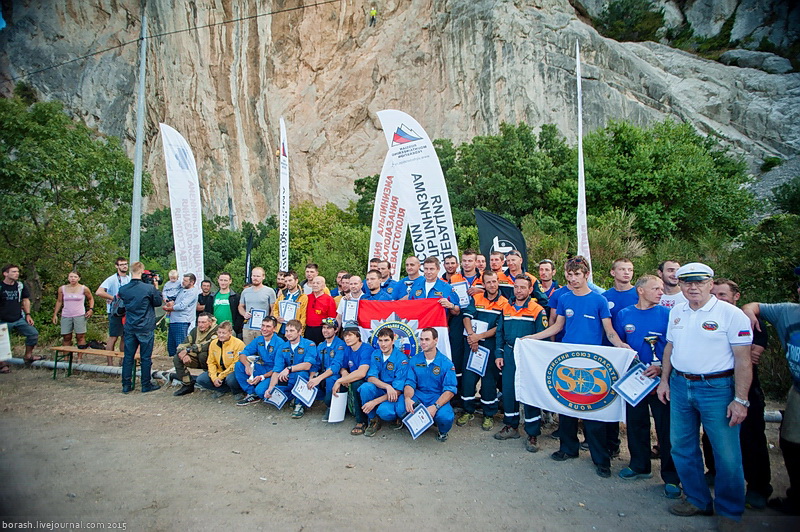 This kind of event is primarily organized for rescue teams to learn from each other and share expertise, to learn new techniques, and to identify what techniques they need to improve. Every team that participated in the competition demonstrated a high level of training.

We plan to organize this event again in next year.

Always remember to be safe, even in the relatively small mountains of Crimea. Feel free to contact rescuers for information and advice about the area: 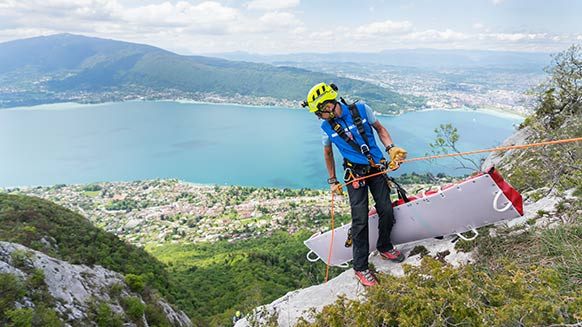 The Role of CNEAS in French Rescue Techniques Members of the CNEAS in France were among the first to use and benefit from the MAESTRO in rescue situations. Some of them were even involved in the development of the product. Learn more about this institution, its employees and its mission! Technical rescue 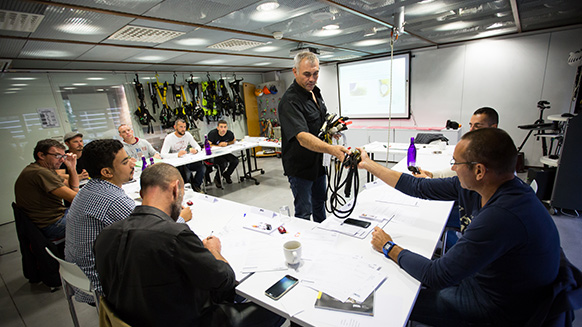 Learn How to Use and Manage Your PPE With Petzl Petzl Solutions develops and shares Petzl's extensive expertise in terms of training, testing, and design of technical solutions, on an international scale. This department trains people involved with verticality on the advisement, usage, and management of Personal Protective Equipment (PPE). Our training centers also provide a venue for technical discussion on the use of our products. Our know-how allows us to provide technical responses to specific problems. Technical rescue 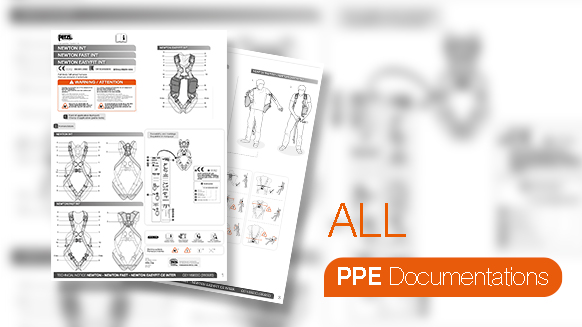 Petzl Guidance for Maintaining PPE For all professionals, regularly inspecting all personal protective equipment (PPE) used daily on the worksite is an important step, as well as a legal obligation! At Petzl, we try to make it as convenient as possible for those who use our products by providing complete documentation. Here's a guide to help you take advantage of the tools that are available! Technical rescue 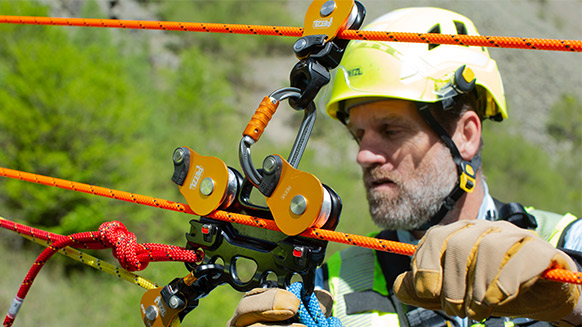 All You Need to Know About the New Petzl Pulleys & Why Your Team Will Want Them After the SPIN L1 models last year, in 2022, the range of pulleys continues to expand with the arrival of the SPIN S1 and the SPIN S1 OPEN. And of course we can't forget the REEVE, a combination of two pulleys and a rigging plate, plus the TWIN RELEASE, a releasable progress-capture pulley designed for setting up 4:1 haul systems. We're offering more options so that rescue professionals can be more prepared than ever to take on the challenges that lie ahead. Technical rescue