Crevasse fall: hauling on a rope with knots

Tying knots into the rope is valuable in helping to brake a fall into a crevasse when there are only two team members tied in. In case of a fall, and without a second rope available, the victim must be hauled up on a rope tied with knots, which can not pass through a rope clamp at the head of the system. The method for untying the knots requires little additional equipment.

Transferring the load to the rope clamp below

The load must be transferred temporarily onto the rope clamp below, which is connected to the anchor, in order to slacken the rope and untie the knot.

1. Once the hauling system is in place, raising the victim moves the knots toward the system.

2. Move the TIBLOC-type rope clamp below the knot to the other side of the knot. The TIBLOC is not loaded and can simply be removed.

3. With the weight still on the pulley, install a long sling (120 cm) onto the anchor and connect it to the TIBLOC. Push the TIBLOC downward until the sling is at maximum tension.

4. Carry out a small pull on the system to briefly release the cam of the MICRO TRAXION. Allow the load to descend under tension onto the sling and TIBLOC.

5. With the load on the TIBLOC, only the sling and the lower rope are taut. Untie the knot.

6. After untying the knot, check that the MICRO TRAXION's cam is engaged and continue normal hauling on the system. After the first movement, disconnect the sling from the TIBLOC, until the next knot. 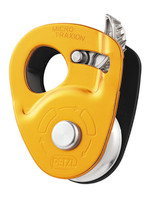