Torsion on the ZIGZAG and ZILLON chain

Note: in this document the name ZIGZAG means either the ZIGZAG or ZIGZAG PLUS models.

Remember: the onset of rope slippage in the chain at 8 kN (single mode), corresponds to a holding power of greater than 15 kN in a normal work configuration (double mode).

Lateral force on the chain in a real situation

In a normal work situation, lateral forces on the ZIGZAG chain are rare. With the ZILLON lanyard, lateral forces can be more common, but with lower force values due to the short fall distances.

To carry out a test, we imagined the worst-case scenario that one might encounter in the field: in a pendulum fall, the ZIGZAG chain snags on a branch and sustains the majority of the impact. We reproduced this situation in the Petzl test tower, considering that an impact on a metal beam is worse than on a branch.

Note: during the tests, the test mass rebounded on impact, resulting in a secondary pendulum fall with a non-negligible impact on the beam.

Even if the chain can be damaged during such a fall, the forces at work in a real situation are lower than the strength measured during the laboratory tests of the chain. 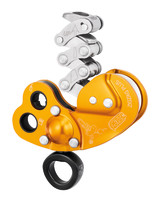 ZIGZAG® PLUS Mechanical Prusik with high-efficiency swivel, for tree care