In case of an accident, a inert person hanging in a harness is a dangerous situation that must be addressed urgently. To act quickly, workers at height must rescue their co-worker on their own, using their standard equipment.

This rescue situation is an exceptional case, where the use of single-person equipment for belaying or backing up more than one person is necessary due to the urgency of inert suspension of the victim. The worker must be trained and practiced in this type of rescue.

Downward evacuation is generally the most efficient solution. The rescuer connects himself to the victim, disconnects him from his support and performs an accompanied descent. The descent is controlled with a single descender; see the documents dedicated to the I'D and RIG.

In case the descent rope breaks, possibly due to damage sustained in the initial incident, both rescuer and victim fall onto a backup system. The rope, the ASAP and the energy absorber are loaded very close to their limits of usage: see below for necessary precautions to take.

This document in no way constitutes training in rescue techniques.
Only the performance and limitations of Petzl equipment have been studied.

1) Rescue with a single ASAP, using the ropes in place

If the rescue maneuver must be done on two ropes, one serves as the descent rope, the other as the safety rope.

Only one energy absorber may be used:

For an accompanied descent with two persons on a single energy absorber, use the ABSORBICA L57 or the ASAP’SORBER AXESS.
These absorbers are capable of stopping a two-person fall on an ASAP, up to 250 kg, without damage to the rope.

Do not use the ASAP’SORBER 20 or 40 for an accompanied descent:
Test have shown that the ASAP’SORBER 20 and 40 (European and international versions) lack sufficient energy absorption capacity for this usage.
Arresting the fall generates a significant impact load: the rope sheath is torn and several core strands are cut.
Although no complete rope failure was observed during testing, the outcome of performing a rescue maneuver on a few rope core strands is doubtful.

Study of the potential for additional energy absorption by the rope, at a distance from the anchor
In our testing, the trials done at 3 m from the anchor gave results that were more or less identical to other tests.

Weight limit
On EN 1891 rope, backing up two persons with an ASAP + ASAP’SORBER AXESS or ASAP + ABSORBICA L57 is authorized in rescue situations with loads up to 250 kg.
Above 250 kg, it is recommended to choose another evacuation strategy.

Clearance
In a fall with two people on an ASAP + ABSORBICA L57 or ASAP + ASAP’SORBER AXESS, the tearing of the absorber will be greater than in a fall with only one person.
In this case: clearance = 5 m + rope stretch.

General precautions
Before and during the maneuver, make sure that all risks of falling and impact loading are minimized (condition of the ropes in place, risk of anchor failure, pendulum, poorly controlled descent, sudden loading).

If the maneuver can be done with one work rope and two safety ropes, it is recommended to use one ASAP and one energy absorber on each safety rope. 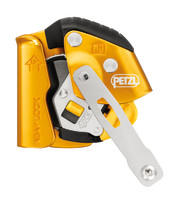