Thomas Vialletet, Nick Morgans, and Beck McWatters, all avid adventure travelers and high-mountain guides, came up with a somewhat crazy idea: traverse the biggest mountain range in New Zealand, the Southern Alps, on skis without using any motorized assistance. They embarked on their quest in 2015. Today, Thomas Vialletet tells the story of the expedition, one in which "knowing how to deal with the unexpected" played an integral part in their adventure. As a bonus: topos & photos of the expedition. 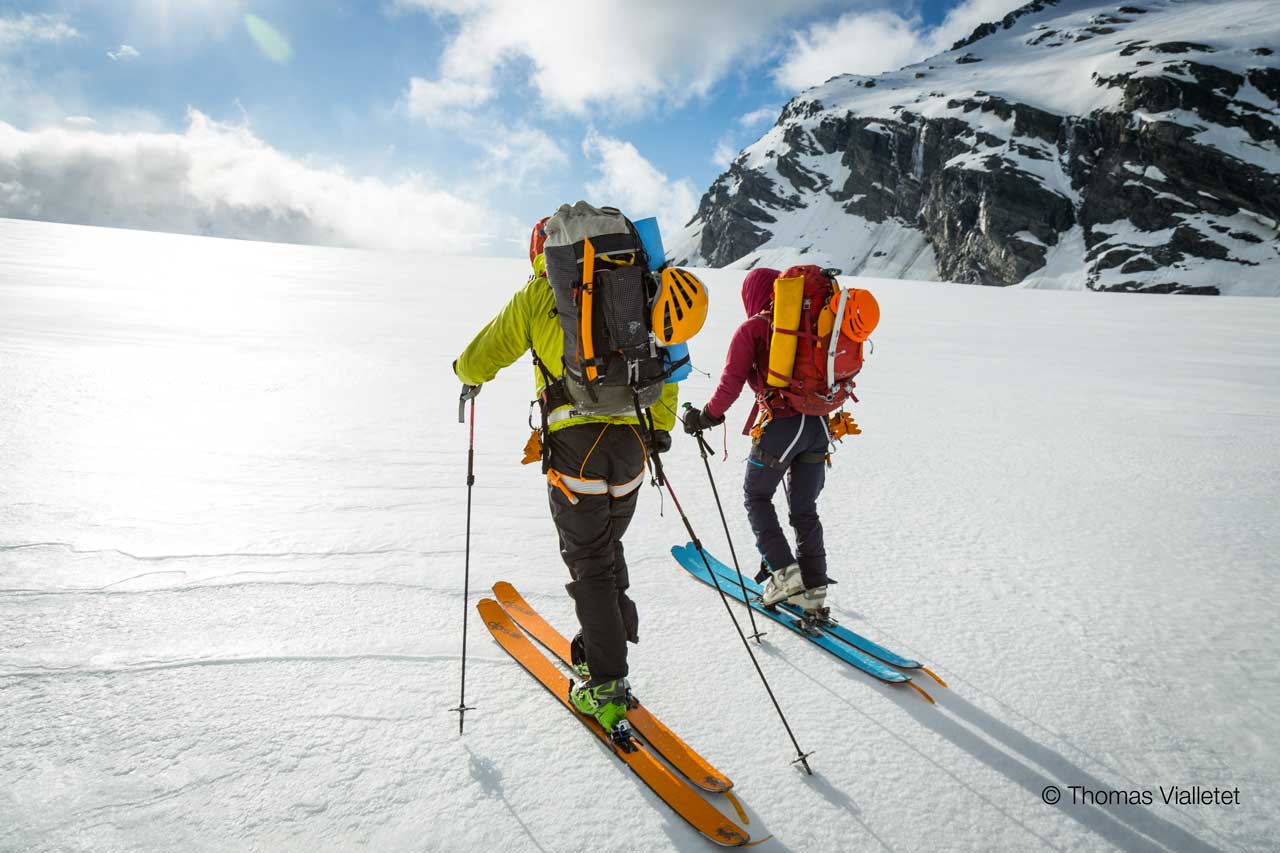 New Zealand is a mountainous country divided into two islands. The larger goal lesser populated island, the South Island, is home to the Southern Alps, the Largest mountain range in the country and backbone Whose is FORMED by the Main Divide. Rather Our original idea through to the ranks Was east to west on skis, crossing the Main Divide, at the foot of Mount Cook, in just a pair of days and Without Any motorized assistance. 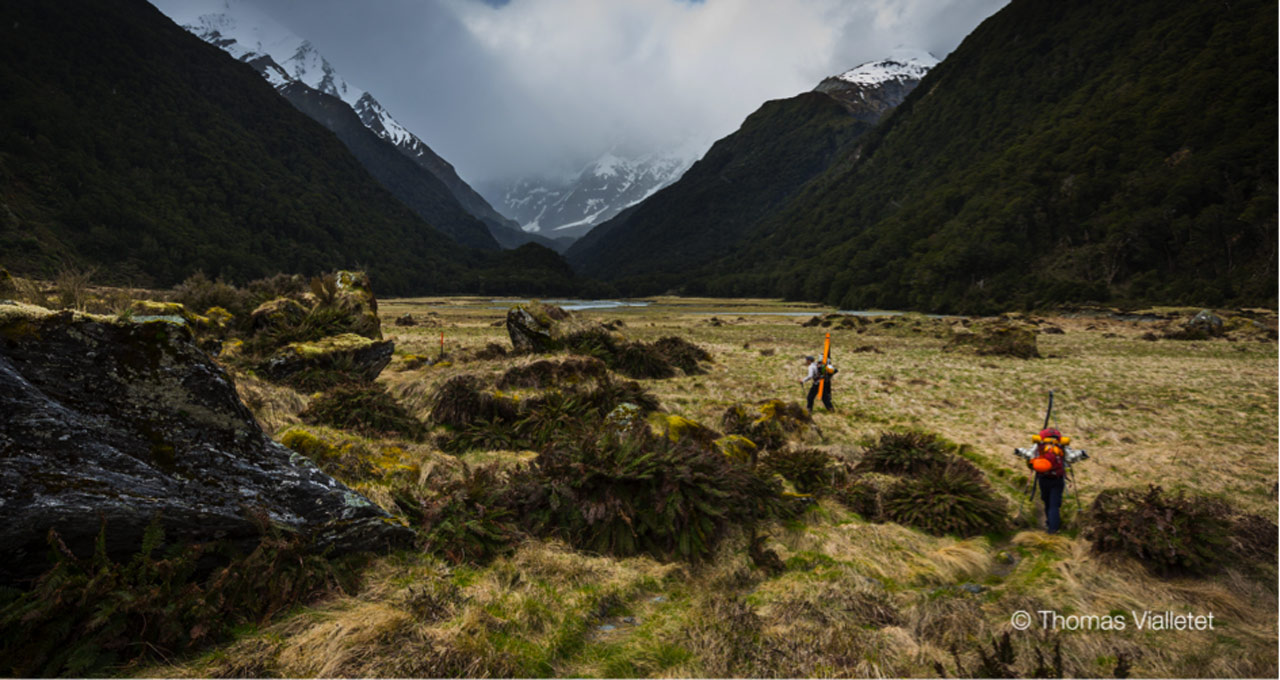 A change in planning right from the start!

Under normal Circumstances access to the Southern Alps is difficulty, purpose in our case It was utterly impossible. The reason: land owners HAD temporarily prohibited all passing through Their property for lambing. We Showed up right in the middle of the season! With our original plan thwarted, we opted to explore the Mountain Aspiring area further south. The idea Was to cross south to north or-even to circumnavigate the peak, Which would be a pretty cool accomplishment since no one HAD every Entire completed the loop. 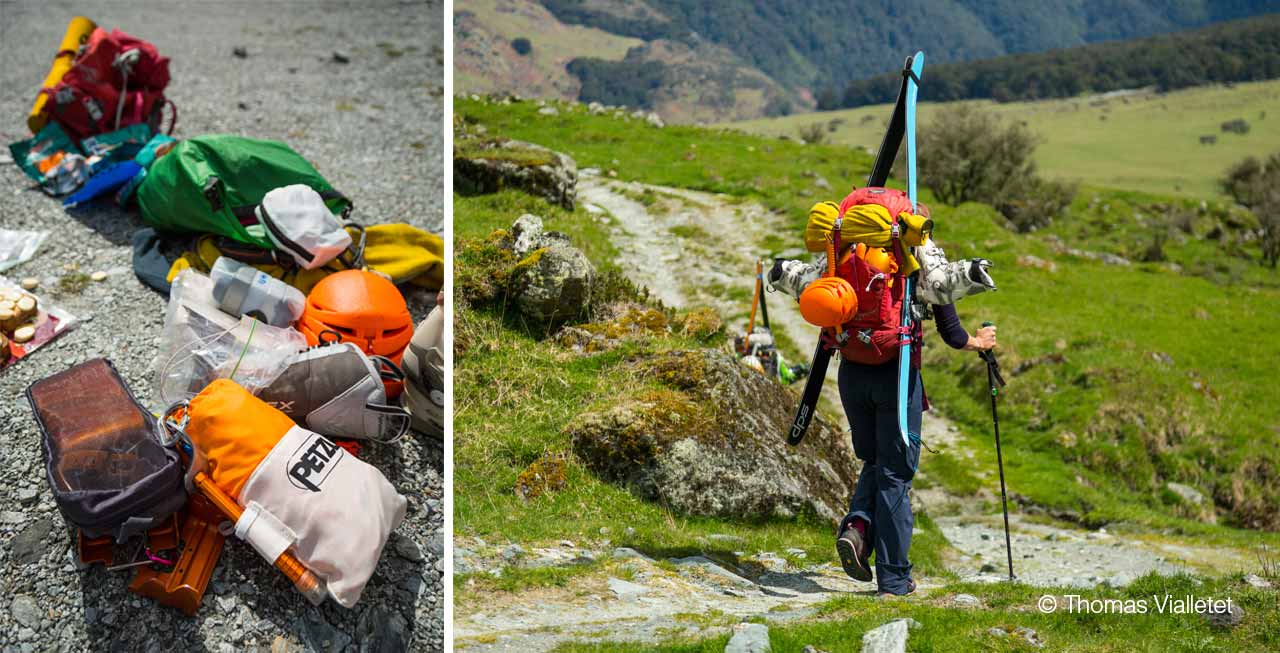 From left to right: our gear for the trip spread out in the parking lot / On our way to the French Ridge Hut with huge packs ... A more than 7-hour approach!

We started up the trail with 5 days of food and skis on our backs, leaving our cars at the Raspberry Creek Parking lot in Matukituki Valley. A long walk through the dense vegetation typical New Zealand served as a warm-up. Fifteen kilometers and 1000m higher, we atteint the first hut, the French Ridge Hut, at 1450m elevation near Mount Aspiring. 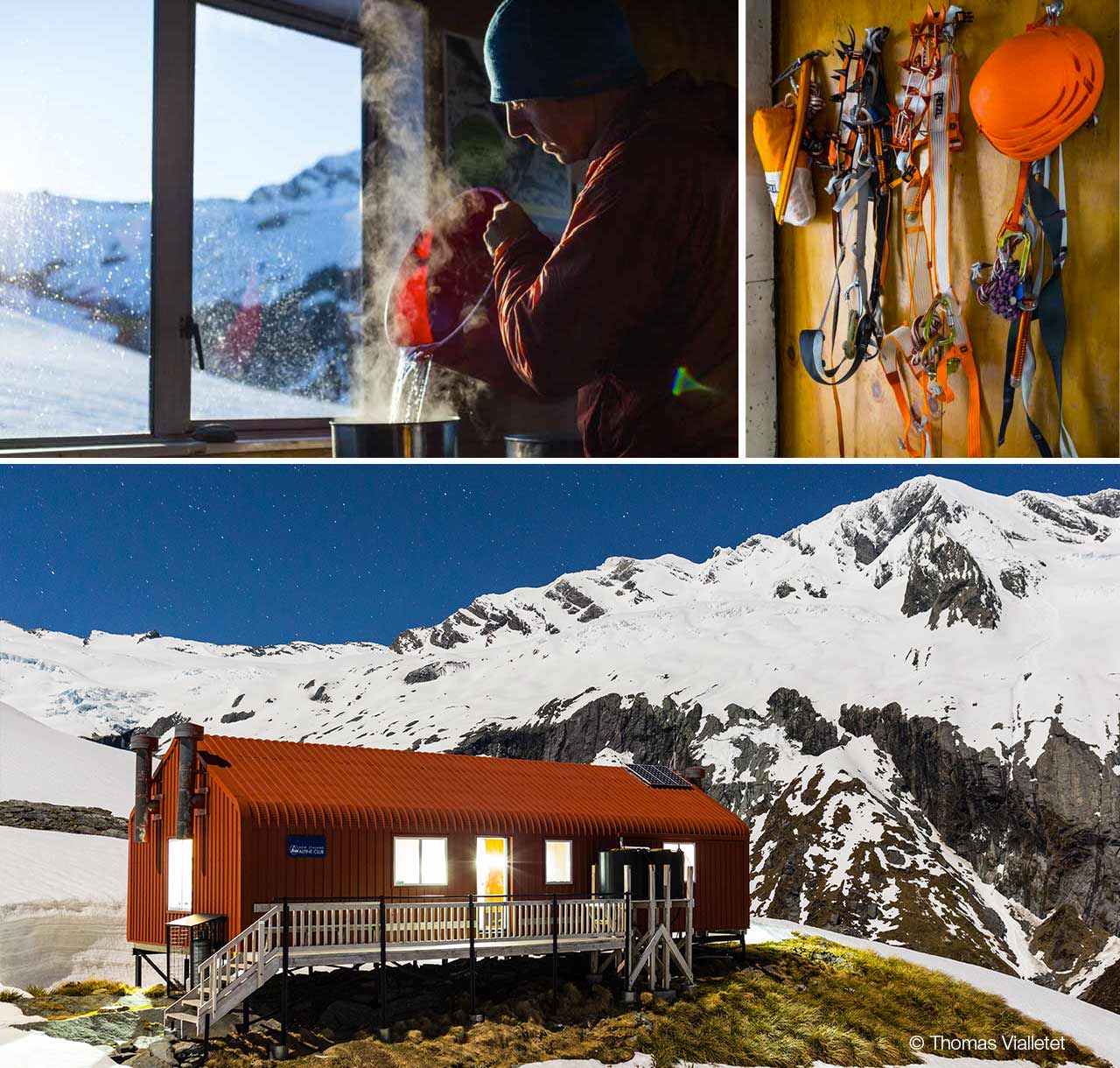 The magic of Expedition year and the curse of bad weather

After a good night's sleep, we finally clicked into our skis. The weather was cold and clear, with a slight wind. HOWEVER, in the time it Took us to reach the glacier, low clouds HAD Moved in, with a low pressure system is the way That Would cover the mountains in A Few centimeters of fresh snow. We continued through the never-ending whiteness Reviews towards the Colin Todd Hut 1750m elevation site location is along the western flank of Mount Aspiring.

Crossing paths in the fog

During the night, three New Zealanders That We had met at the hut left to climb Mount Apsiring. A few hours later, in the dense fog, we ran into Them As They Descended from the summit. A few turns later and a solid climb, We Were ble to take refuge from the Elements in the Colin Todd Hut. Outside, as the storm raged, We Began to issue the likelihood of the weather remaining steady for the rest of our journey. A phone call to the valley to check the latest forecast Informed us que la clouds Would only clear For a Few hours the next morning for us to enjoy sunny blue skies. We Decided to continue on our way, leaving the comfort of the hut to venture into the unknown. 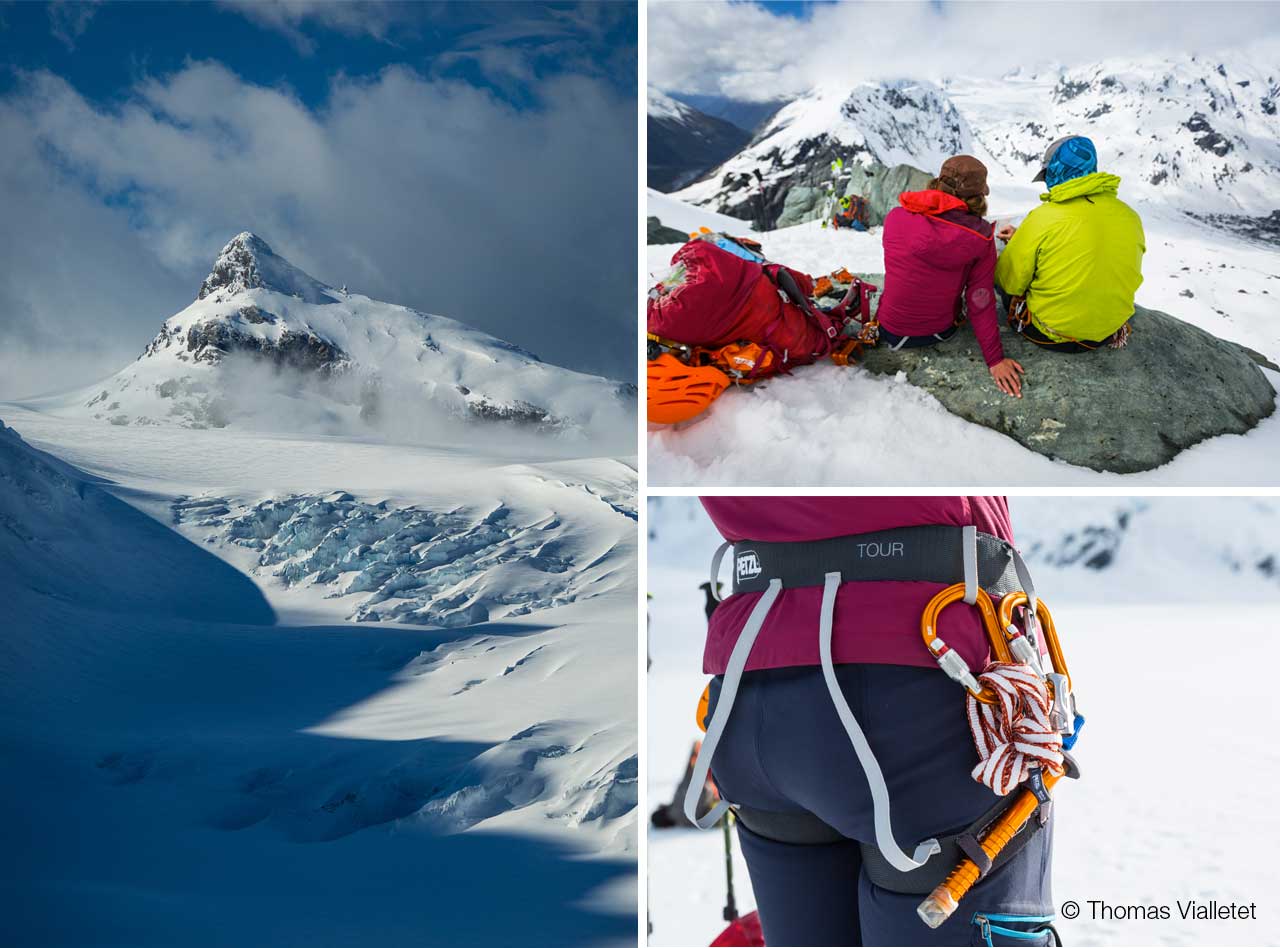 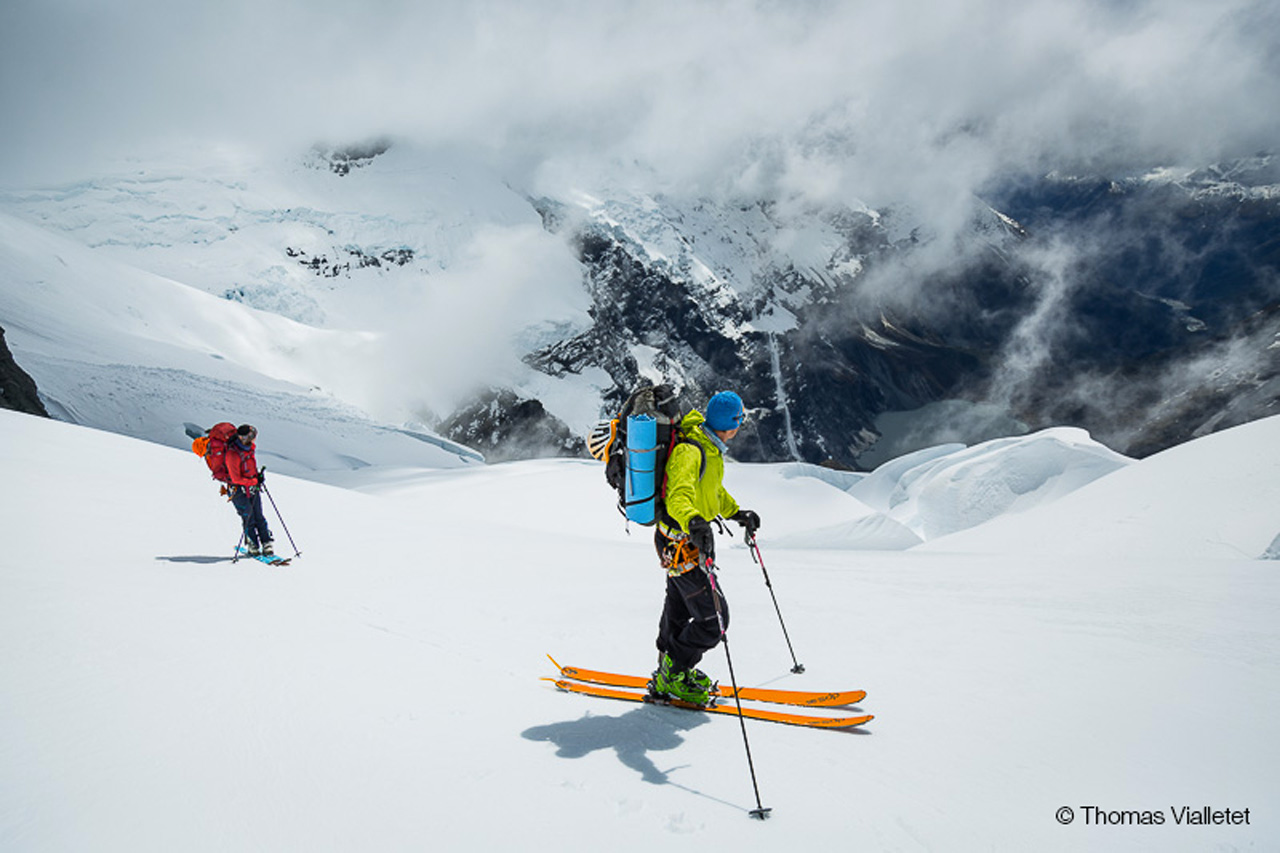 On the Therma Glacier, the wild side of Mount Aspiring with views of Lake Waiatoto and Wilderness Area. Choosing our own adventure!

The basin north of Mountain Apsiring Sees very little travel. We must have beens Among the first dozen people ever to ski there. The area is covered in vast, steep, and Heavily crevassed glaciers, Where Safely wandering around the deep Chasms is not as easy as it might look. We crossed through challenging terrain Where We Knew That Would Prove increasingly turning back up to difficulties we atteint is no end of no return. After a short discussion we all Agreed to keep moving and dive head first Towards adventure!

At the end of the day we set foot on the Upper Volta Glacier, after-Spent a morning traversing the Lower Volta and Therma glaciers. The perfect bivy spot was just sitting there waiting for us: a small rock alcove for shelter beneath a huge boulder. After leveling out has a fantastic spot and freeze-dried meal, we fell fast asleep. 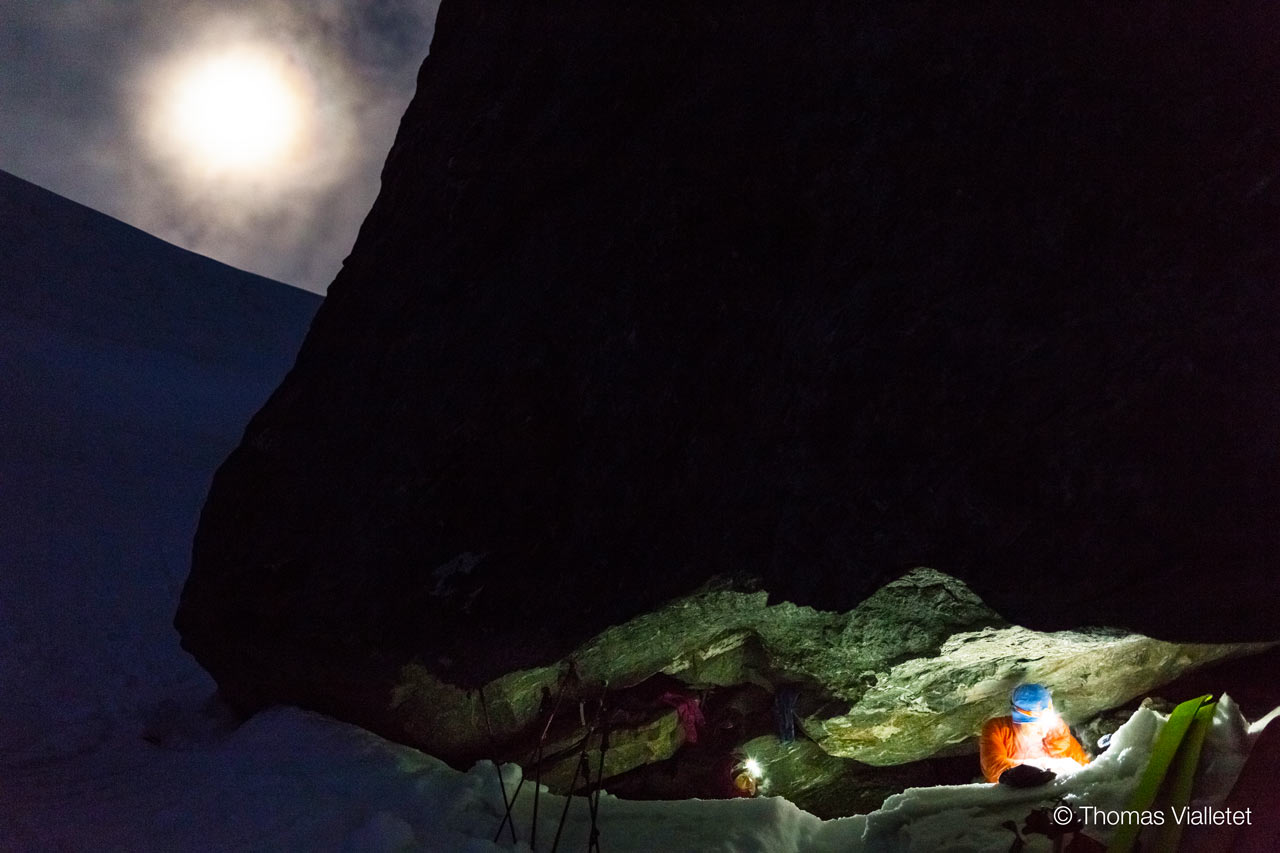 Our bivy beneath a boulder along the Upper Volta Glacier

The next day the sky Was clear. We enjoyed a beautiful sunrise Above Mount Aspiring. Unfortunately the weather changed Quickly, and 10:00 storm has left us to navigate through a white nightmare.

Climbing through the storm to reach Ruth Ridge

Nevertheless, We Were ble to successfully ascend to our objective: the top of Ruth Ridge at 2100m elevation. HOWEVER, we Quickly our Saw That Was Originally planned descent route impossible. A huge, overhangning cornice Severely blocked access to a spot already That Appeared to make for a challenging descent in the winter. It was time to turn back. During the night, the storm dropped up to 40cm of fresh snow .. 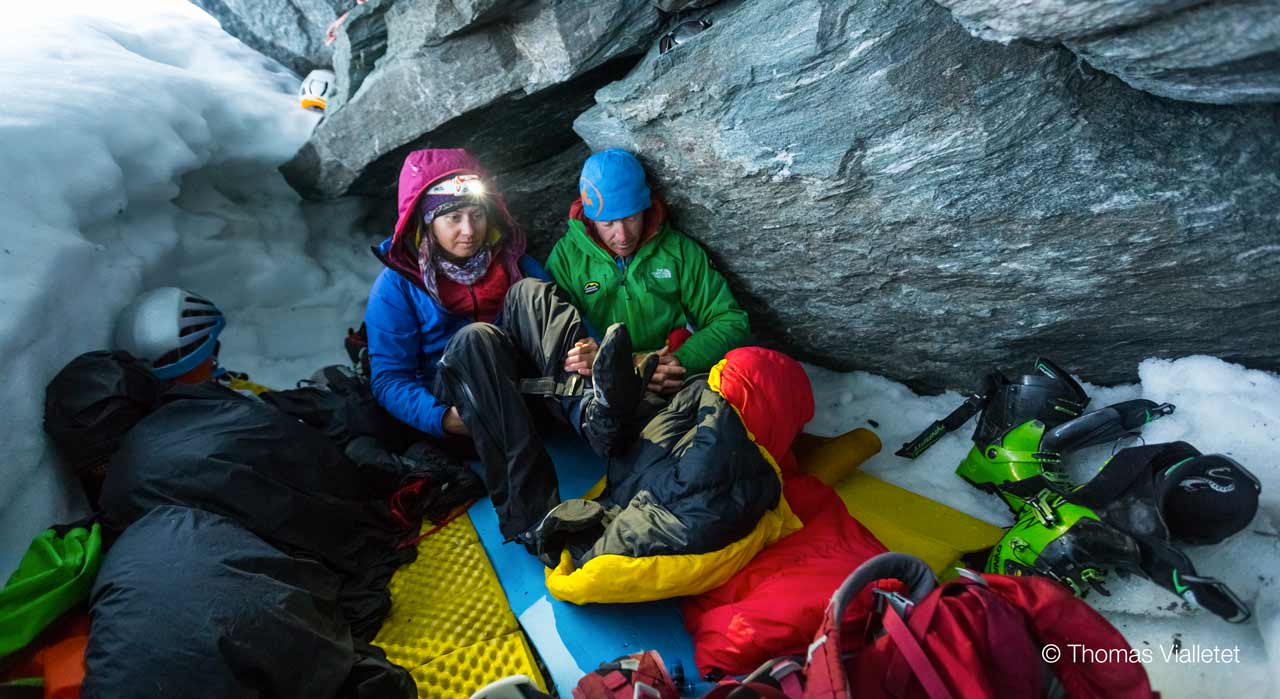 At our bivy on the Upper Volta Glacier

We Decided to take our chances to find a way out, Knowing That We Had to continue moving forward since retracing our steps was just not possible, and-even less so Given all of the new snow. Our plane brought` us to the confines of the Upper Volta Glacier, near the junction with the Purity Glacier and a dozen kilometers from our bivy. The idea to go around Was Beauty Ridge to the west to reach Pearson Saddle, And Then down Wilkin Valley, first on skis And Then a long walk to reach the village of Makaroa and civilization. Unfortunately we ended up in a position Where We Were simply stuck: Was the land too steep and exposed to avalanche risk partner after the recent snowfall. For the second time we Decided to retraces our steps and head back to our bivy spot. 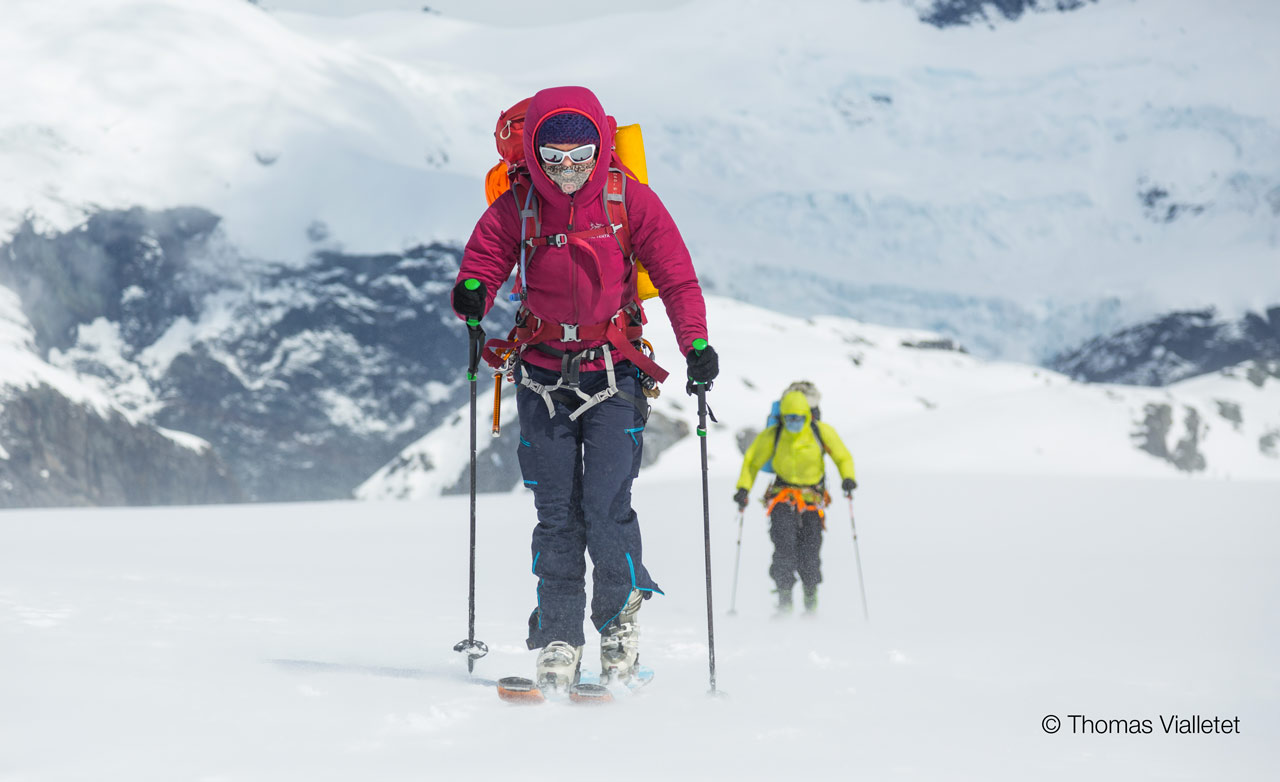 Beck against the wind, far up the Upper Volta Glacier with the Therma Glacier in the background

Not pushing the envelope too far

Only one option --other Remained, crossing Rainbow Pass and Montcrief Col. We made a quick phone call to the valley and Learned That Was another storm in the forecast. To make the position-even worse, We Were running short on gas and food. After a long debate, we Decided to call for a helicopter ... to Avoid Becoming stranded beneath our bivy rock for days Without Any gas or food. This was a difficulty decision for us to make, Definitively ending our adventure and Any hope of our trip Completing Without Any motorized assistance. HOWEVER, we Decided to Avoid pushing the envelope too far on this already Rather bold exploration on skis, and reliable Were Safely to return home in one piece.

Our group still remains highly motivated to embark on an all new adventure. Sometimes you Need to Know When to say when, the circumstances are-even if not Necessarily extreme, to Avoid a survival mode situation. The full traverse of Mount Aspiring and circumnaviation still remains to be completed. The solution Appears to be via Montcrief Col. Any takers?

Map # 2: INITIALLY our planned route to cross the Mount Aspiring range (starting from the first hut) Map # 3: a close-up of the various Attempted routes from our bivy spot Map # 4: a close-up of the Beginning of the cross 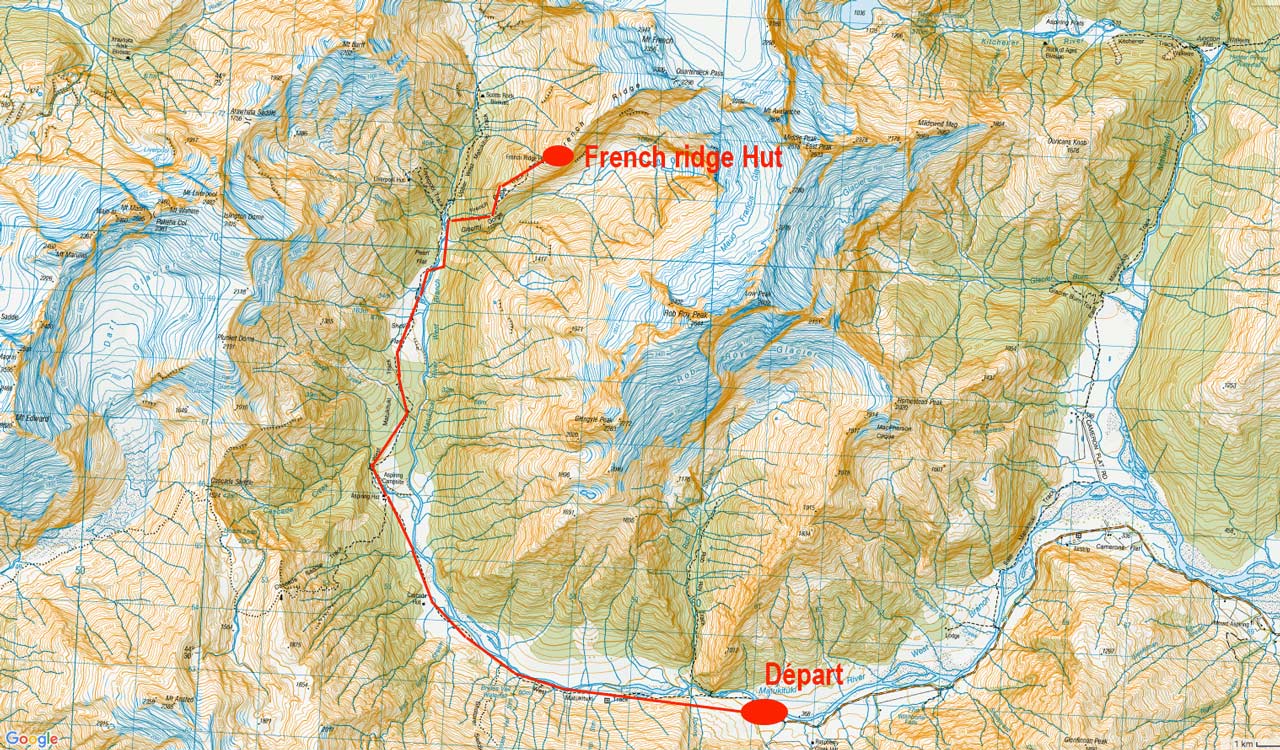 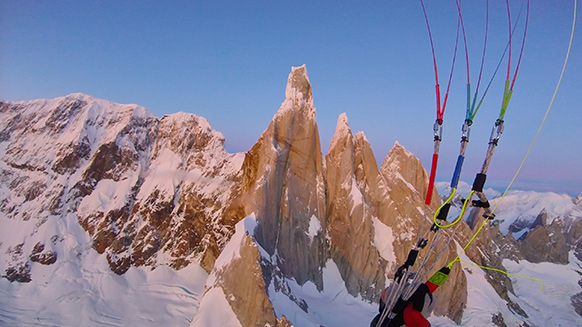