The Gran Paradiso Range represents one of the must-visit corners of the Italian Alps. The only 4000-meter peak entirely in Italy, its relatively easy regular route makes it a popular ascent for both backcountry skiers and mountaineers. Fully circumnavigation of the range is an exploit in itself. In April 2017, alpinists Tanja Schmitt, Heike Schmitt, and Matthias Scherer completed the full circumnavigation of the Gran Paradiso range on skis in less than 20 hours. Tanja tells the story of their adventure in "paradise."

Completing the ‘Tour del Gran Paradiso’ on skis means tackling 5500+ vertical meters and covering 60km to circumnavigate the entire Gran Paradiso Range. The route includes several sections of steep climbing, ridgeline traverses above 3300 meters, and massive alpine glaciers. Some sections can be icy and snow conditions change over the course of any given day. Wind, cold temperatures, and the dark of the night are all natural phenomena relatively easy to manage and part and parcel to the experience. However, avalanche hazards and soft heavy snow represent genuine challenges to overcome. Moving in this kind of mountain terrain requires a full quiver of alpine knowledge and experience in addition to properly trained legs and lungs.

A single push in a day

Fully circumnavigating the Gran Paradiso Range usually takes five days. Our goal this year was to complete the entire route in less than 20 hours. We knew from our experience in 2015 that we could pull it off in a single push, but we also knew that our 21hr 47min time was just a starting point. Our first single push in 2015 and our failed spring attempt last year - we abandoned the "Tour" shortly after crossing East Grand Neyron Pass - taught us valuable lessons about the tactical errors to avoid. We knew we could do better and wanted to try the "Tour" again, this time with a much better understanding of what this circumnavigation in a push involves, as well as properly training and preparing for such a strenuous endeavor.

We actually came up with the idea of completing the "Tour del Gran Paradiso" in a single push a while back. Several years ago, Matthias, Heike, and I moved to the south side of the Mont Blanc Range to ice climb full time in winter. Trading ice tools for skis became a natural transition at the end of each season. Spending time in the mountains is what matters most to us, and when the vanishing ice weighs heavy on our souls, moving on skis lifts our spirits.

Training for our backyard adventure

In the many years since moving Cogne Valley, we have skinned up most of the area's peaks several times. On some summits, like Gran Serra (3552m) we have set personal bests: 2.28 hours and 2.23 hours for the 1900 vertical meters from Valnontey Bridge (1650m) to the summit. We tour to Col di Teleccio Pass or up Gran Paradiso several times per season. Our weekly routine includes fast-training sessions with 700m-1100m vertical gain up local ski runs as well as slower endurance ascents in the backcountry ranging from 1200m-2000m vertical gain. We add vertical meters on bike and on foot for training. Matthias kept track of it all this year: he climbed a total of 85,000 vertical meters from January 1 to April 24, 2017, the date when we completed the full loop around the Gran Paradiso Range, and I had climbed just a little bit less. These statistics do not include all the meters ascended for the approaches and routes during the ice climbing season.

Choosing a project like the ‘Tour del Gran Paradiso’ in a single push seemed like a natural next step, a challenge that lingered just a stone´s throw from our doorstep: we would start in Valnontey and after a few-hour tour would finish at our home in Lillaz! It seemed like the right thing to do!

Heike, who is very close to becoming a fully-certified high-mountain guide, has guided several peaks in the area. One of the main tours she guides is up the Gran Paradiso itself, and she is used to seeing clients overcome with joy as they admire the scenic view from the summit while standing alongside the solemn-faced statue of Mary. Simply being there is pure joy for her, and standing on skis is something that she loves most.

The idea of putting together a team for the full Gran Paradiso loop was born.

While preparing for the adventure, we focused a lot on building team spirit: on a long tour like circumnavigating the Gran Paradiso Range personal lows and highs are expected, but it is important to maintain both a steady pace while doing your best to prevent any lactic acid buildup by skinning too fast. We all wore watches with heart-rate monitors to keep from passing the lactate threshold.

Another important aspect was to keep spacing relatively close between team members. This obviously applies for safety reasons on high-mountain terrain but also provides a huge moral boost. We taught ourselves to keep team members and team cohesion in mind at all times. Just as Phil Jackson said, "The strength of the team is each individual member. The strength of each member is the team." On a long day like the "Tour" these words are filled with meaning.

The most rewarding moments during this single-push circumnavigation were those when we moved in unison like a well- oiled machine.

We had fun on almost every descent, from skiing ice at night, to moguls on Gran Paradiso itself, to corn snow on the last section of the loop. There were also challenging moments, like the upper section of Gran Paradiso, with bulletproof ice and the extremely cold morning wind; or in the midday heat when the warm temps and wet heavy snow slowed us down from to a crawl and made us suffer on the final long ascent to Col di Teleccio Pass. On this section we lost a lot of time and broke with our previously steady pace. You just have to realize that the mountains always make the rules accept and that these moments are an integral part of the "Tour del Gran Paradiso."

METEOR – Year round adventures Skiing the snow-covered peaks high above Courmayeur, climbing the vertigo-inducing limestone walls of the Verdon Gorge, and traversing Aiguilles d’Entrèves Spire’s knife-edge ridge… Lise BILLON and Vivian BRUCHEZ live their passion for the mountains day in and day out! Like them, never leave home without your METEOR helmet and enjoy countless adventures all year long. Ski touring 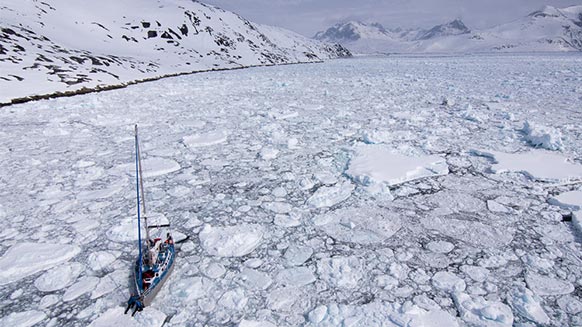 Maewan Adventure Base - Part 1 : Ski-expedition in Greenland This movie covers the first chapter of the Maewan adventure, between Iceland and Greenland, where Erwan Le Lann’s “fleet” of two sailboats departed from Isafjordur, with each boat crew composed of an expert sailor, freeride skier, mountaineer, photographer, and cameraman. Ski touring 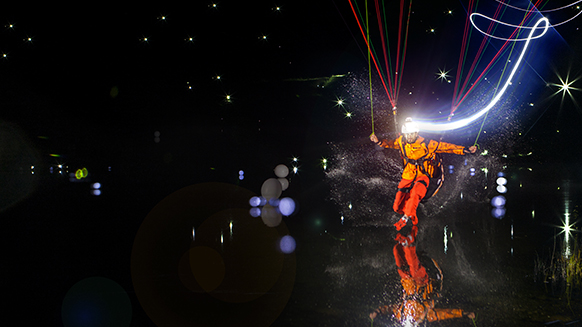 Flying Lights: take off with J.B Chandelier As night falls, paragliding pilot Jean-Baptiste Chandelier takes us on a magical, highly-technical, and truly unique ride, with the great outdoors illuminated through an incredible light show. Take a look! Ski touring