A secret code for the uninitiated but magic words for cavers throughout the world! BU56, aka "Sima de las Puertas de Illamina", is one of the biggest and most beautiful caves on the planet. Located in the Budoguia Mountains of Spain's Navarre region, this cave represents one of the key links within the immense PSM network (Pierre Saint Martin, which today contains 240 explored kilometers of caves). Read the expedition report as told by Phil Bence…

This legendary cave was discovered by Jean-François Pernette and Inaki Ortilles in 1979 and was longtime considered the deepest single-entry cave in the world. A complex and physically demanding 16km roundtrip labyrinth, and believe me, 16km underground is a lot!

In terms of depth, the topo shows minus 1325m below the surface at the sump, lots of narrow passageways, huge galleries, and a turbulent underground river. In short, BU is on the must-do list of most adventurous cavers.

Exploring "BU" is a serious endeavor that requires a great deal of preparation and a solid team. Mid-August I received a phone call from my friend Bruno Fromento:
- Hey Phil, we preparing to head to BU at the end of August, are you interested?
- Uh… (3 seconds to think about it) YES! I have work to do but I'll rearrange my schedule... 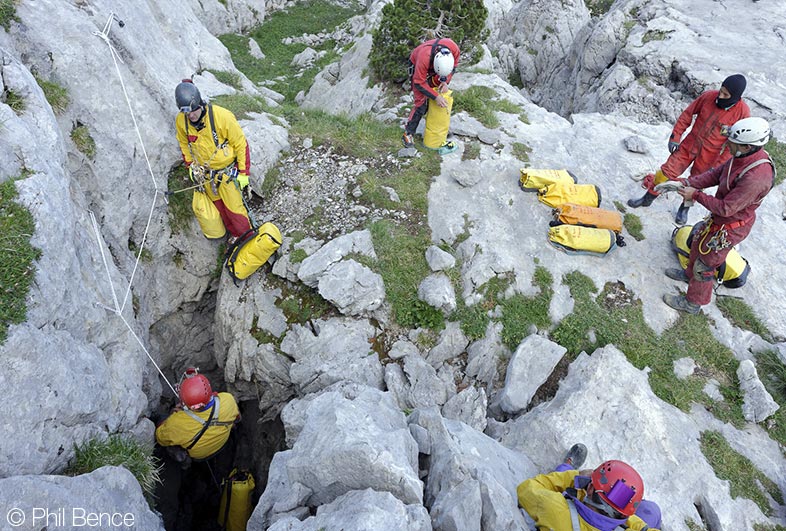 I left on August 28, 2013, for a 6-hour drive towards Zurita, above Anso, in the Valles Occidentales Nature Reserve. When I arrived the team was in high spirits and busy preparing for the excursion. I in turn did my best to stuff my personal equipment, food and camping gear for three days, photo equipment, and some team gear all into a single pack. I quickly realized that it wouldn't all fit!

I would have to carry a second bag for the entire trip, an idea that did not thrill me, but if I was hoping to take decent photos of the underground landscape I had no choice.
The evening was festive as we filled our stomachs with carbohydrates, looked over the topo pinned in large format on the side wall of the group tent, and were frought with excitement to explore such a history-filled cave. 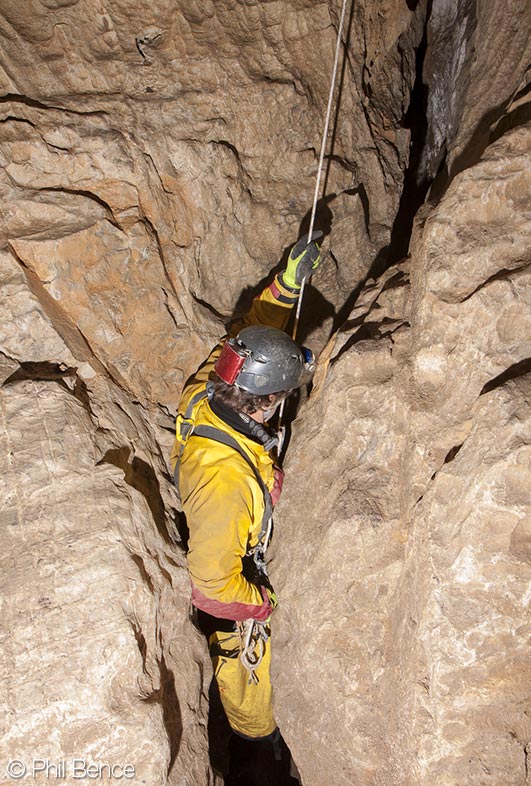 At 05:00 in the morning the alarm goes off. At 06:00 we start the approach, shoulders weighed down by our heavy loads. After hiking three hours on a decent trail and then on fantastic limestone pavement, we finally reach the cave entrance, or "Puertas de Illamina," at 11:00.

We start the descent, with Bruno and Tot managing the equipment, uncoiling and fixing the ropes, and before we know it we're at the famous "N" meander, which has all but halted forward progress!
It is impossible to pass through this section alone with 2 huge packs per person, so we had to go both one person and one pack at a time. As our friend Denis likes to say, "A little camaraderie is always good…"

After this slow section, we link up one shaft after the other until we reach another "oprimido" meander, not as tight as squeeze as before but much longer!
Time flies and we're still wedged between the two walls with our packs placed in one uncomfortable position after the other. Where are the large passageways, the huge chambers, the beautiful rivers? 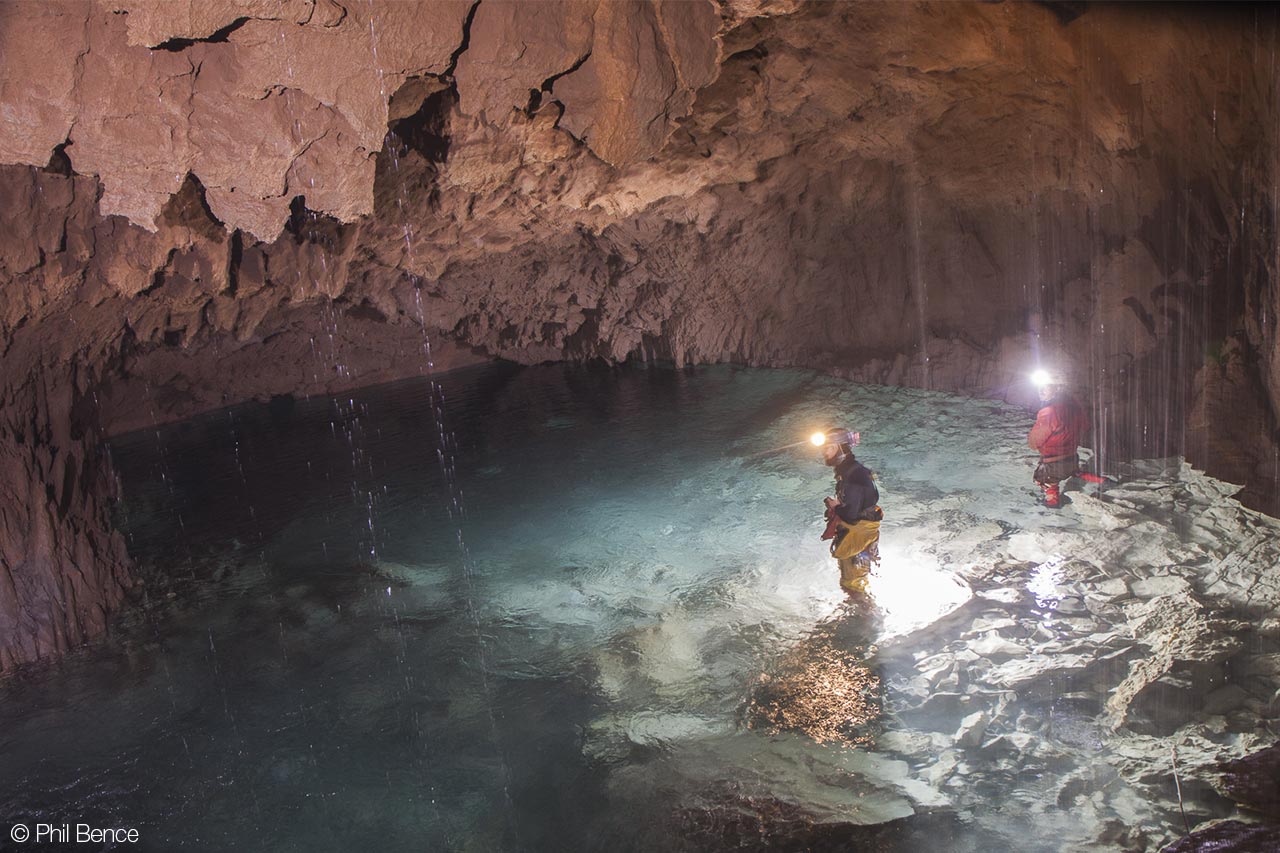 The meander finally eases off; we're triumphant and it widens enough to let us pass through easily. We finally reach a large and rather hospitable passage with a river running through it peacefully for the moment. Now located 500m below the surface, the situation starts to get serious! The river quickly deepens and we stop to change clothes. Should I wear a latex diving suit or canyoning wetsuit… I opt for a light 3mm neoprene wetsuit with a kayaking dry top, since I like to have more freedom of movement and latex tends to rip at the worst moments…

After 14 hours of moving through highly varied terrain since entering the cave, we finally arrive at "Roncal" chamber. "Weird, it’s not nearly as big as I expected…"
In fact, we were only at the entrance; you need to climb 80 vertical meters to the top in order to truly appreciate the chamber's size. Descending another 120 m we arrive at the campsite everyone was now anxious to reach. At 800 m below the surface and it is getting late. After setting up camp and getting a quick bite to eat everyone jumps in their sleeping bags. 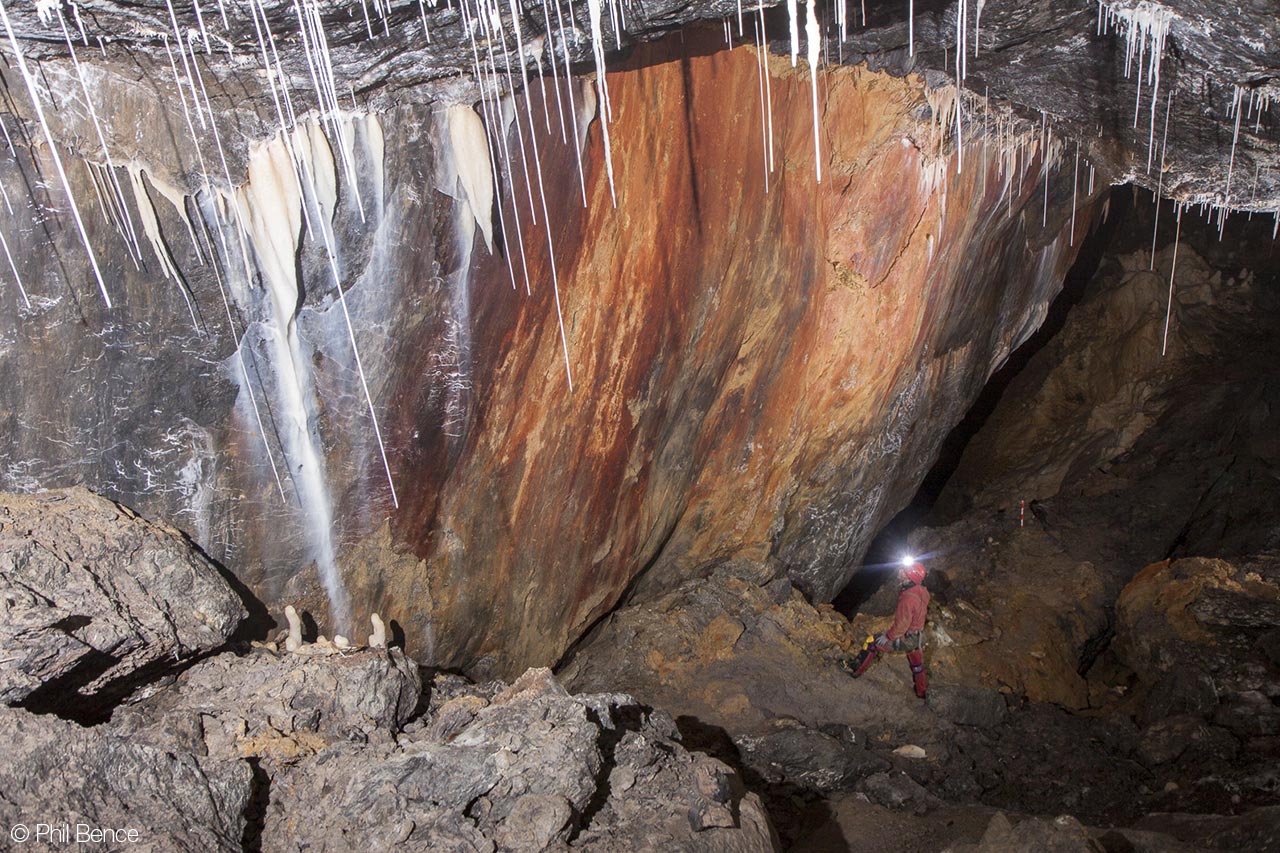 The night proved pretty warm and comfortable depending on one's technique, tent, and warm gear. My lightweight sleeping bag with Annette's magic poncho works out great; I spend a fitful night's sleep. When I wake up at 09:00 not a peep from anyone, everyone is still enjoying the warmth of their shelters. The temperature is 6°C with almost 100% humidity, so it seems that everyone is better off in their sleeping bags. I agree and fall right back asleep... 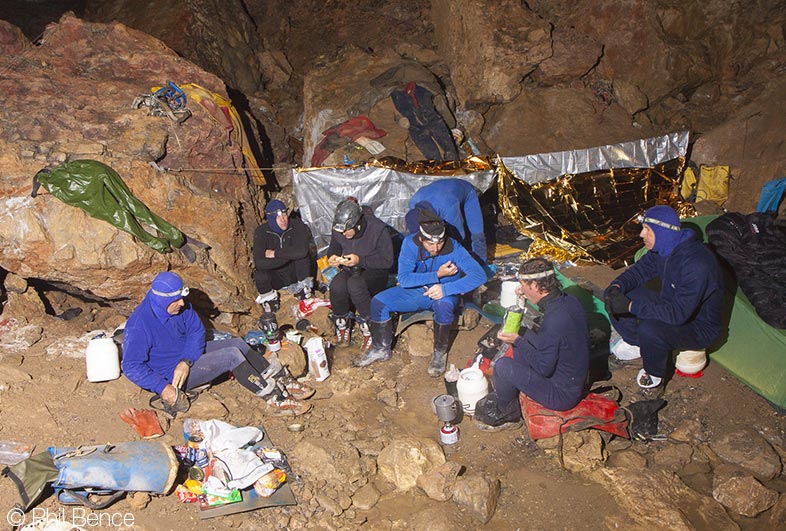 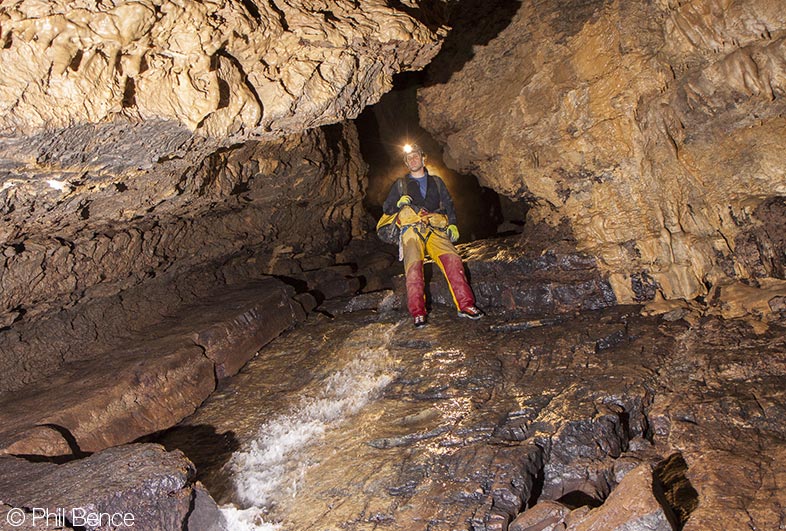 When everyone starts to finally wake up… it's already noon!
Yesterday was long day, so the rest was well-deserved and needed. We prepare for the second day, which promises to be unforgettable but also just as long as the first.
We once again don our water gear; the upcoming section of cave is a series of canyons and large boulder-filled chambers. After camp, 2 vertical passages drop us into Roncal canyon. The atmosphere is magical, the water seems to be coming from everywhere, the noise is almost deafening, progress becomes a more athletic affair, and smiles light up each and every one of our faces. 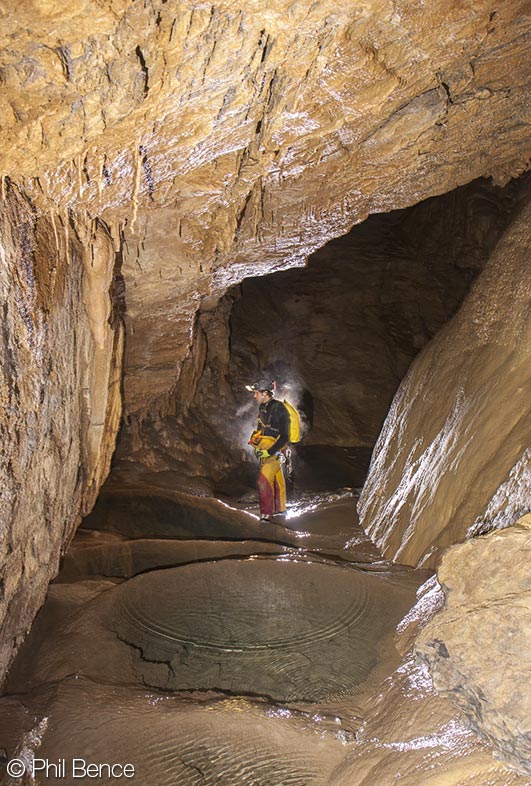 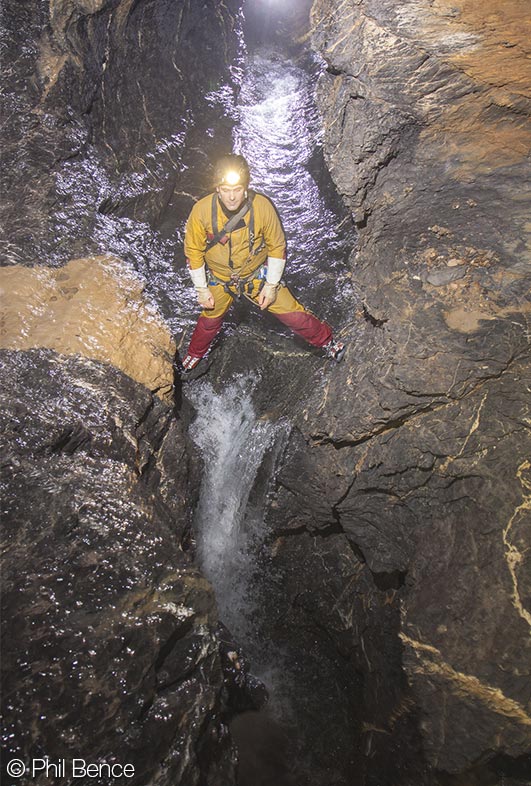 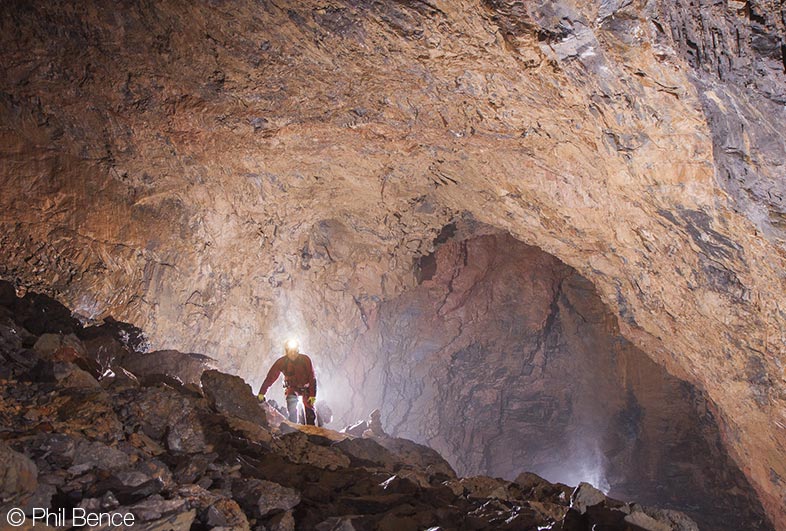 Next are the famous "narrows, minus 1000", a narrow section at water level very far down… even though the cave is huge both before and after, another way around this narrow passage has yet to be found. Jean Paul Sounier, a friend from the Papua New Guinea expedition, certainly had the time to look while spending 36 hours stuck behind this section during his last visit to the cave! We link several huge chambers that include superb features such as soda straws and colorful calcite flows; everything is so clean, so immaculate… We feel like we're the first ever to set foot here.

Back in the water, Belagua canyon! 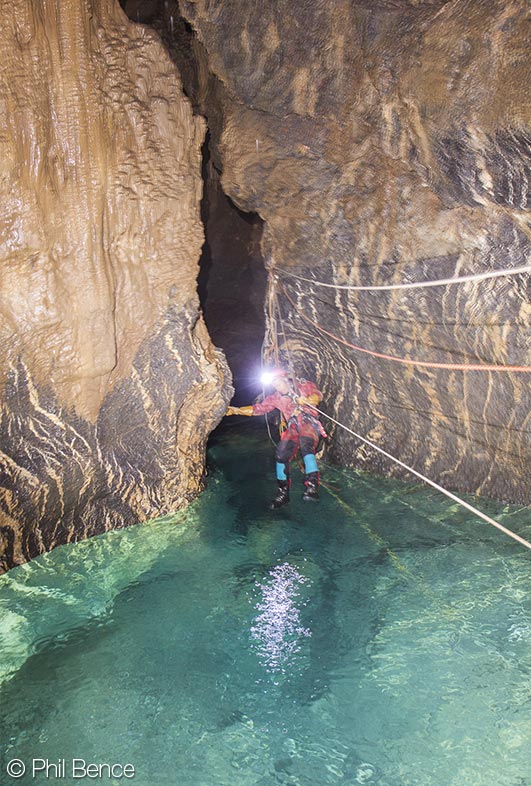 The atmosphere changes once again: water is a part of underground life, not only does it create, but its forceful presence changes everything. Water transforms a relatively easy itinerary into a physical and route-finding challenge.
Once out of the canyon, a short 15m climb provides access the Lapazarra fossil chamber. Our ears get a break as we move through the last few passageways before the sump, the last bottleneck of the network. The river continues to flow, nothing can stop it.
The colors reveal that the water flows out of the cave at the Illamina resurgence located at the bottom of the Saint Engrace reservoir, in the Western Pyrenees.

Ascending out of the deep

For us, the next move is up. We need to return the way we came, first stopping at our camp for another night of well-deserved rest. The second day lasted 11 hours; hours spent looking at unbelievable things, hours that will remained ingrained in our memories forever.

Day three, wakeup at 09:00, we're not from around here!
We pack up everything and start the long ascent, removing the fixed ropes as we go, passing the packs to each other, negotiating the narrow sections. One obstacle after another disappears behind us. Back at the "N" meander, we wonder if there is wider way through or if our packs are just too big. 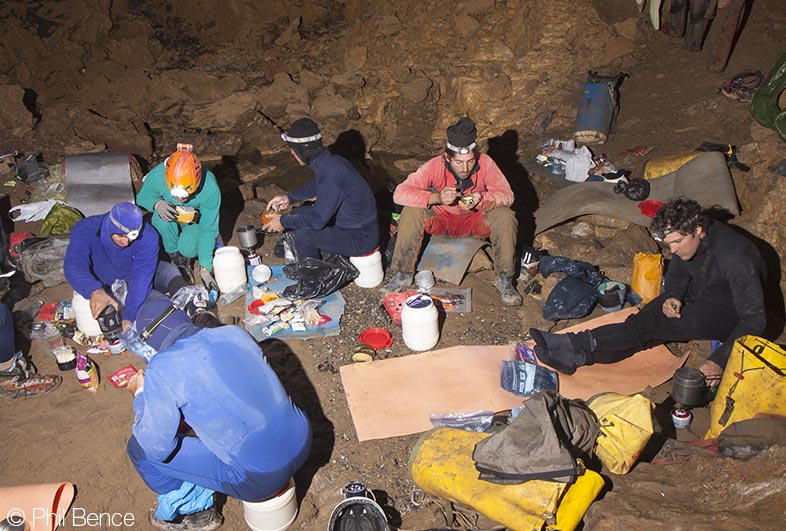 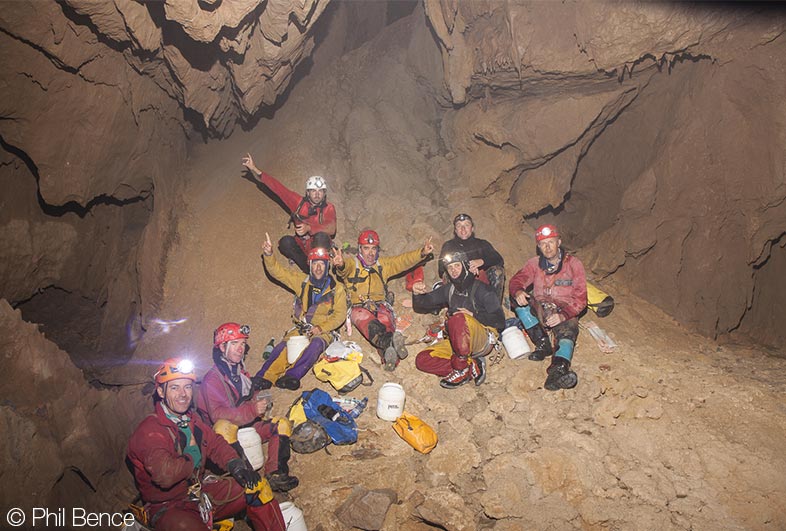 A wonderful adventure between friends

After climbing only one-hundred or so meters of shafts we're back outside in the cool night air. It's midnight and a cold wind blows, but with no clouds in sight the clear starry sky proves spectacular. We exit the cave one after the other, bright eyed but tired.
At 02:00 in the morning our packs are ready for the 8km hike out of the mountains.
Why is the hike back so long? It feels much longer than the initial approach!
My feet and back start to hurt, but the parking lot is close.

As day breaks over the mountains we finally drift off to sleep. 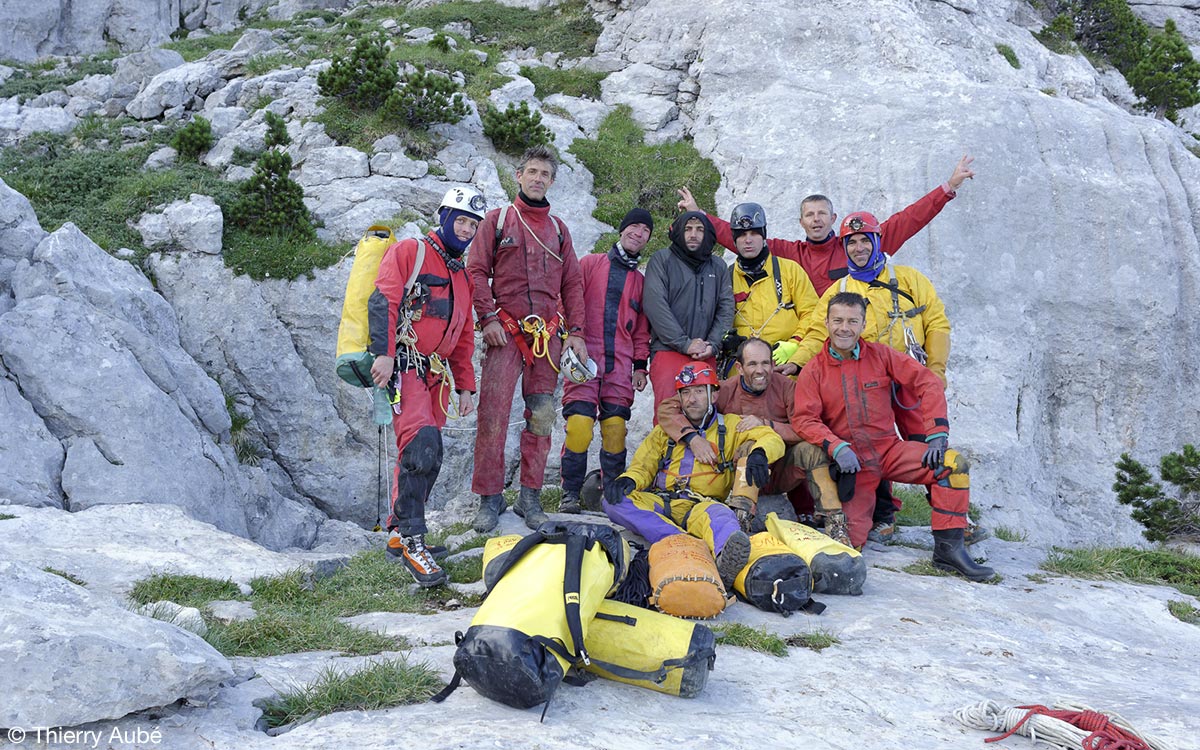 We had special permission from the local authorities to take measurements all along the network. These measurements will serve to specify the exact depth of the cave at the sump. We were also there to take photos of such an incredible place, since the few existing photos are rather old.
Above all else we were there to enjoy an intense and unique experience together. 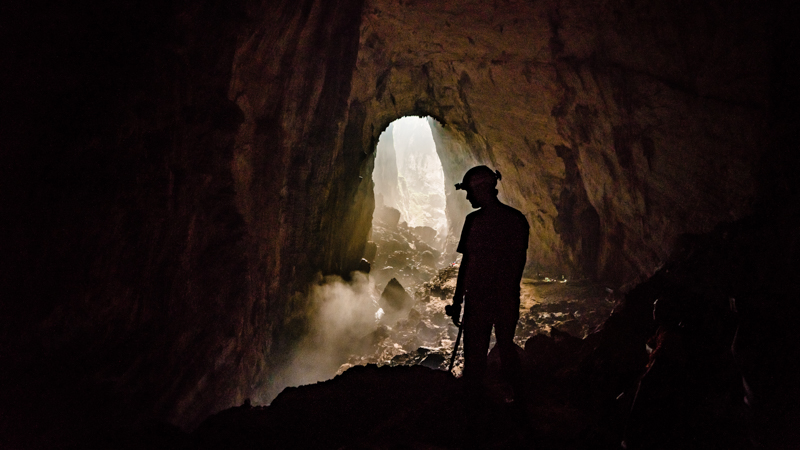