At the end of an ice climb, there are several descent options: walking, rappelling on fixed anchors or rappelling on abalakovs. It is the latter that is described here.

To create an abalakov, you will need a 7 mm minimum diameter cord, an abalakov hook such as the MULTIHOOK, a knife and a long (21 cm for example) ice screw. Remember that you will also need some practice and skill before getting it right.

1. Cleaning the surface and making the first hole.

4. Tying the loop with a double fisherman knot. Cut any surplus cord.

Don't make your loops too short.

The strength of the abalakov depends greatly on ice quality and on the way it is made (distance between holes, angle...). Beware of existing abalakovs, as they may have hidden damage and turn out to be dangerous if reused.

Run the rappelling rope directly through the loop. To secure the first person's descent, the abalakov can be combined with another ice screw. Be careful to connect this back-up screw to the rappel rope, not just to the abalakov sling.

When descending, take care to attach your ice axes securely to the harness. 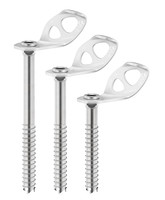 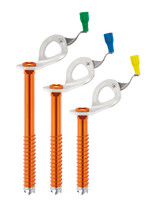