Repeating the Bonatti route on the north face of the Matterhorn

In February 2015, a dream came true for Petzl Germany’s Felix Sattelberger: he and Reini Hones made a rare documented ascent of the Bonnatti route on the Matterhorn’s north face. Below is Felix’s trip report of the arduous two-day and two-night ascent of the mountain of all mountains. 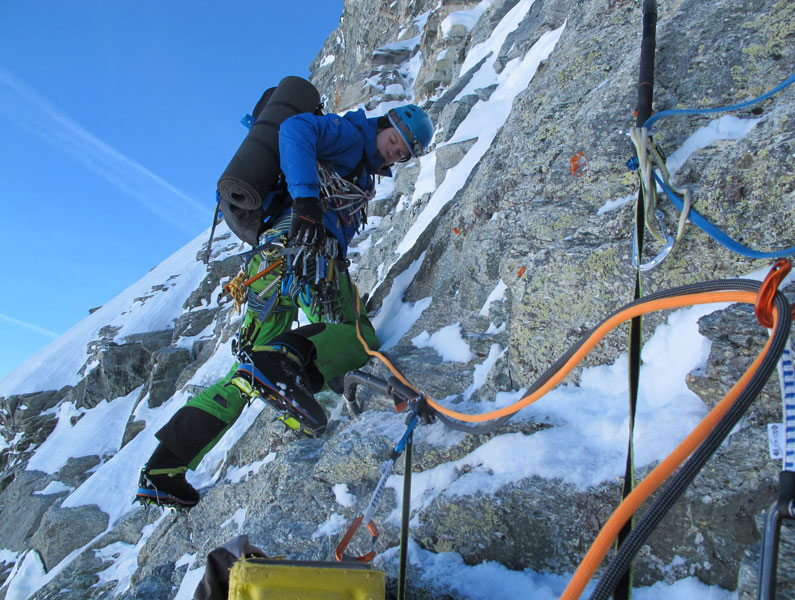 Reini on the Traverse of the Angels, one of the route’s cruxes ©Felix Sattelberger

In November 2014, I set foot on the Matterhorn for the first time. A dream came true for me when I climbed the Schmid route in a day with my colleague Nils. It was the perfect day on paper: we started at 03:30, reached the summit without hitch (12:00), and were back at the Hörnli hut that evening (18:00). The fact that 20 to 25 climbers were on the route at same time was new for me. I had mentally prepared for a day alone in the mountains, where we would need to use our route finding skills and make critical decisions. The experience left me a tiny bit frustrated and wanting more. 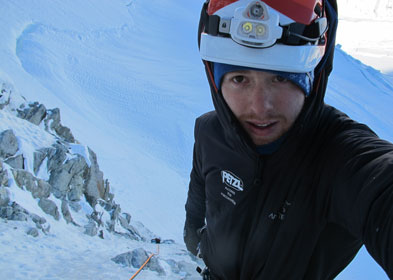 Left: approach on skis to the Hörnli hut © Reini Hones   Right: on the lower section of the face. ©Felix Sattelberger

I wanted to go back to the Hörnli hut. The call of the mountain was just too powerful and Reini Hones from Innsbruck expressed his abounding enthusiasm about the idea of climbing the Bonatti route. We were both available in February and hoped that the weather would cooperate.

On Sunday, February 8, the time was right. The northerly winds changed direction, signaling a 4-day window of sunny skies. My backpack was practically ready and on that Monday afternoon we were already busy breaking trail to the base of the route. 80cm of fresh snow and high avalanche risk made our mission both tiring and tricky. 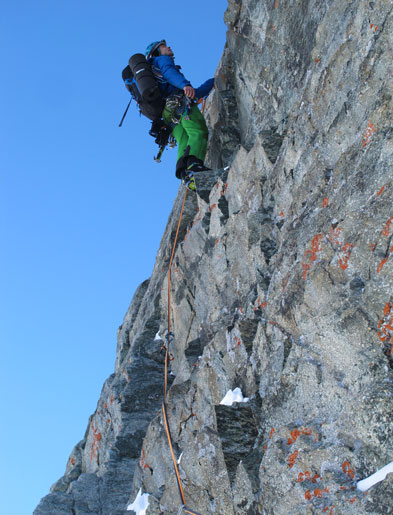 The crux, climbing a section of slightly overhanging rock at the end of the Traverse of the Angels. © Felix Sattelberger 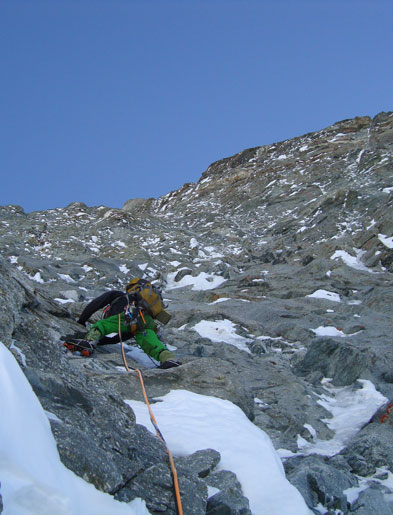 Still beneath the traverse ​ ©Reini Hones

On Tuesday morning at 04:00, our attempt officially began. The bergschrund took us a solid half-hour, putting our mental fortitude to the test before we had even reached the base of the wall. By the second pitch, the route went vertical and the rock turned crumbly. A long section of simul-climbing led us to the Traverse of the Angels, where the route once again became tricky and difficult to protect. A short rappel brought us to the end of the traverse. Going with our instinct led us up a short steep 15m pitch to a section of less vertical terrain. 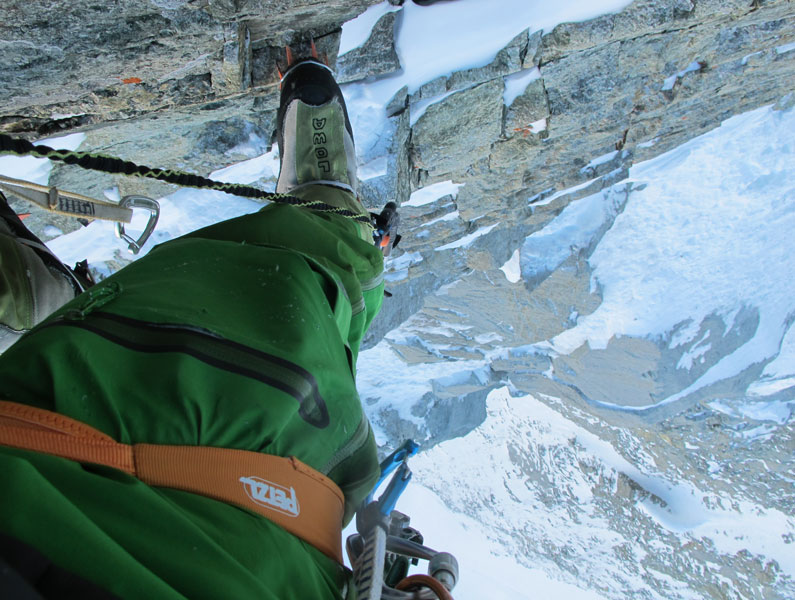 We climbed a few more pitches until nightfall. Reini led the last pitch of the day and built an anchor. When I reached him I was happy to be able to take a seat on a small, somewhat flat ledge. We looked at our watches, the surrounding terrain, and came to the conclusion that this was probably the most comfortable spot in the area. So we set up our bivy, made some soup, and enjoyed peanuts and bacon for dessert. 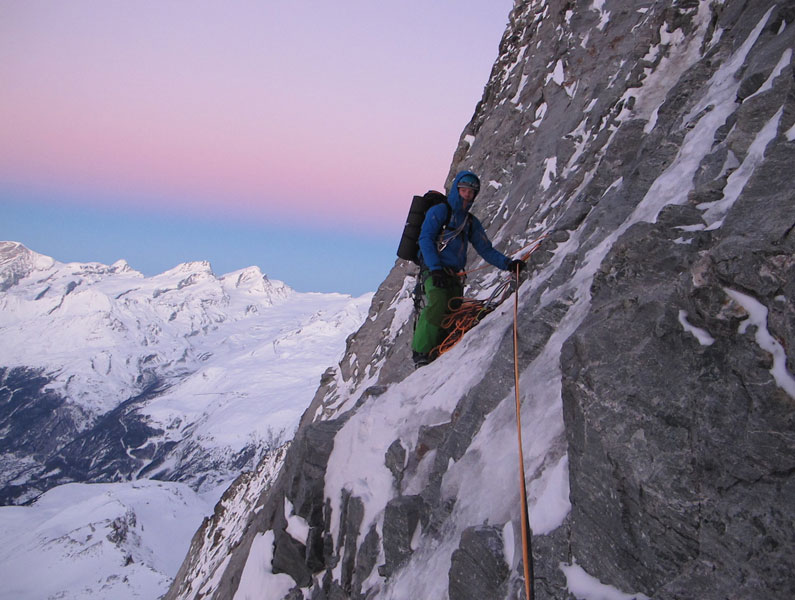 Reini at our bivy for the night… ©Felix Sattelberger

We endured a grueling and frigid bivy. The sling connecting us to the piton remained taught throughout the night. The alarm sounding at 04:00 was not a moment too soon. It was a challenge to get moving. Anything that we were not holding in our hands had to remain clipped in; there was no space to set something down. The anchor and ledge where we slept was simply too small.

Our situation meant that we were ready to start climbing at 06:00. The next part of the route was long and committing, with sections of mixed climbing and thin gullies of ice. After a short El Cap style pendulum traverse, we entered a series of gullies that would lead us to the Schmid route. 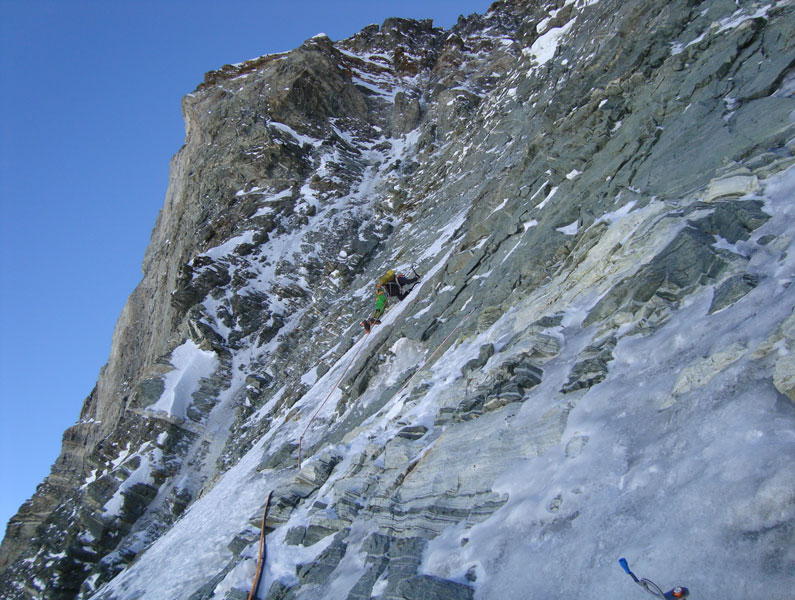 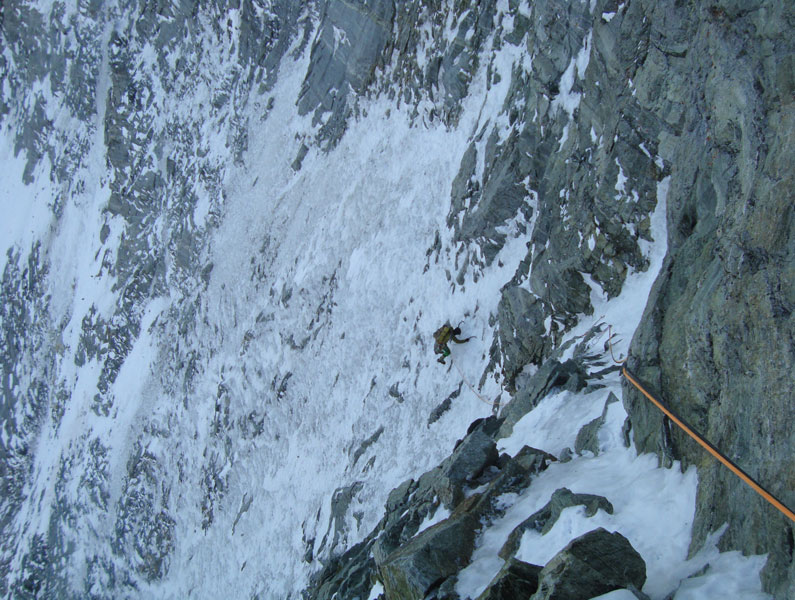 On the pitches above our bivy​ ©Reini Hones

The end of the Schmid route was dreamlike. The terrain suddenly became much easier, allowing us to climb quickly and reach the summit just as the sun started to set. What an incredibly beautiful and intense moment. Happy but completely exhausted, we spent a few minutes on the summit to enjoy the calm and the setting sun, which recharged our batteries and filled us with a great sense of satisfaction. 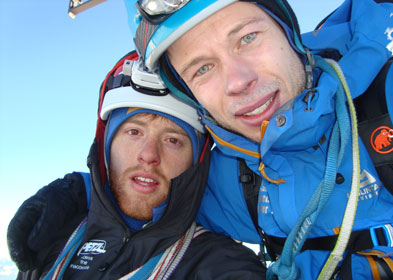 Finally on the summit ©Reini Hones

We eventually started the descent towards the Solvay hut. Rappelling in somewhat of a daze, we reached the hut at 21:00. After an unbelievably comfortable and fitful night’s sleep, we continued our descent to the Hörnli hut, and could not believe that everything went as planned. After skiing down to Zermatt, our winter adventure ended. We were happy and satisfied on the drive back home.

Sunset on the summit of the Matterhorn: an incredible finale to the route.​ ©Reini Hones