Caving in Papua New Guinea: Iowa 2014, between fantasy and reality

"Iowa 2014" was a national expedition led by the French Caving Federation (FFS) and part of an overall effort to explore the Nakanai Mountains in Papua New Guinea. Led by a highly experienced team, cave exploration in the region's virgin equatorial forest has resulted in the discovery of several legendary deep caves and sinkholes such as Nare, Kavakuna, Minyé, Wowo, and Muruk. Back from the depths and into the daylight, Phil Bence talks about this adventure, between fantasy and reality, and how patience allowed for the discovery of new caves in the heart of the equatorial forest.

With the Iowa 2014 expedition barely over, the contrast between life in the forest and the creature comforts of one's home is simply astonishing. A few members of the team are still in Kokopo dealing with storing the gear we have left on site to be used for our upcoming adventures. The word "expedition" is often squandered and overused (or rather misused) for just about anything. For us, it means exploring truly uncharted wilderness, meeting local populations, and total immersion into a challenging natural environment where humans are simply not meant to travel. The Papuan people know little to nothing about the gigantic caverns within their mountains and the current generation had never ventured as far or as high into the range. They were taken aback by our perceived recklessness and the colossal effort we undertook searching for caves, building trails, setting up camps, and pushing ever deeper into the earth. Our porter friends expressed pride in sharing this adventure with us; they were as curious about us as we were about them and their world.
Even if life at the higher elevations translates to simple survival, it does not make the forest any less fascinating. This is one of our planet's last remaining primary forests, with all of the amazing biodiversity implied. Primary equatorial forests are extremely rare today, and according to well-known botanists, they will likely disappear forever within the next six years if nothing is done to protect them. In Papua New Guinea, the risk comes from Malaysian loggers who are drawn to the rare and precious wood found in these mountains. Clear cutting has taken over the forest with increasing speed from one year to the next. 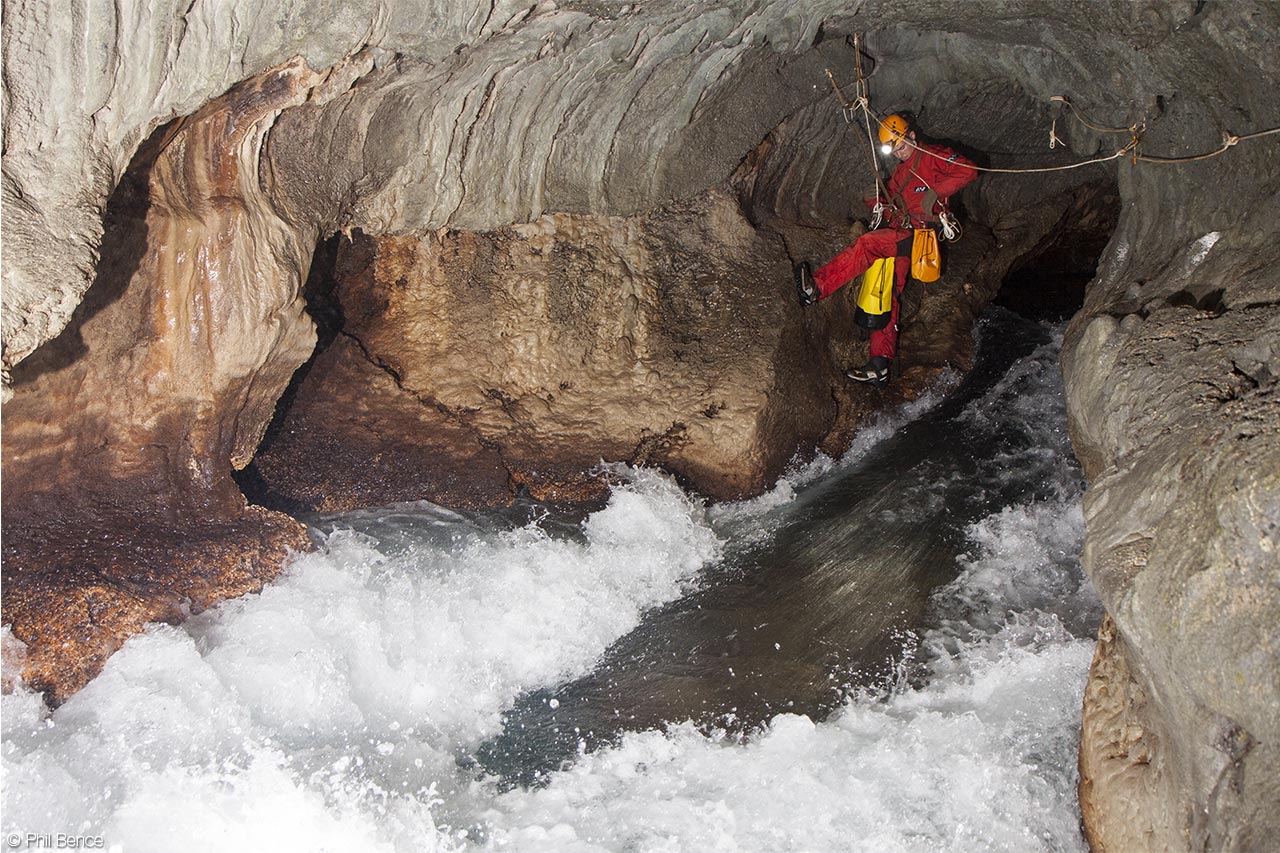 Iowa 2014 was a reconnaissance mission, a first approach to the range. We only knew of Wara Kalap, the superb 5m³ resurgence along the coast. A more thorough investigation of the area during the first few days allowed us to identify other resurgences. In fact, there are several spots where water comes spewing out of the bowels of the range at more than 20m³/second! This unbelievable flow rate left us cavers fantasizing about the infinite possibilities.

From daydreaming to taking charge! 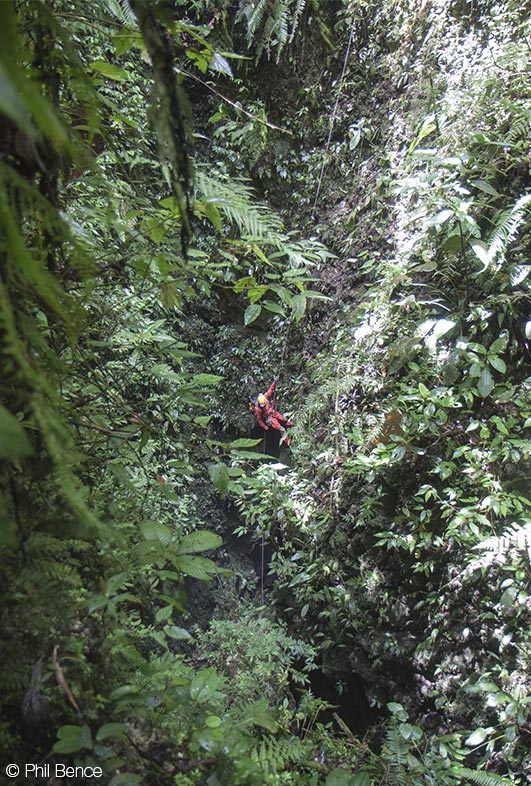 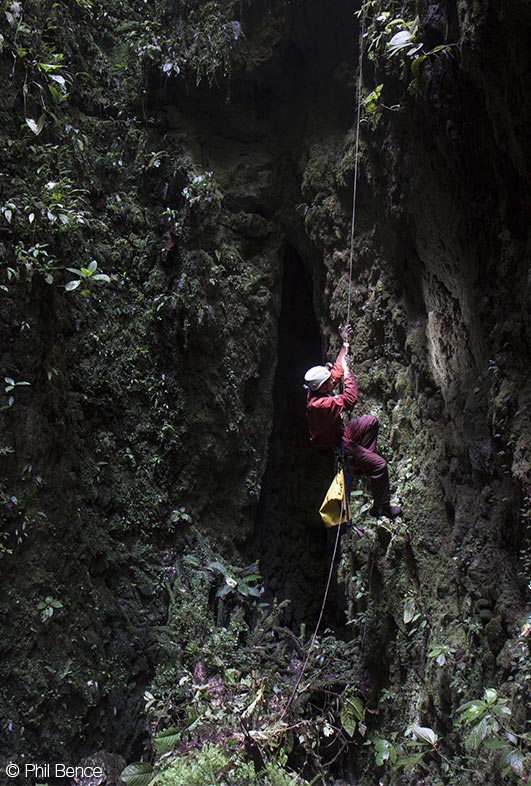 We quickly set up our first camp at 400m elevation, just above the resurgence. As soon as we arrived, the local Papuans showed us a small blow hole right below it. The air current taunted us, and provided proof that a significant cave network sat right below our feet. We ended up wasting our time trying to widen the hole, which turned out to be way too narrow. Small teams headed in different directions, combing through the range looking for a way in. We discovered the first worthwhile entry points above 600m elevation, located several hours on foot from base camp.
- 50m, - 80m, - 100m, there were several chasms, but all dead-ended quickly, making it difficult to infiltrate the range. We built a trail that climbed to 1000m elevation; 6km as the bird flies from our base camp. We hoped that the hours upon hours of machete work to set up a new base camp would pay off with better results. The three weeks that followed produced the same disappointing outcome: dead-end after dead-end, and always back to the drawing board. Several attempts were made to pass through some extremely narrow cavities; we tried forcing our way through in the hopes of finally reaching "something big". In Papua New Guinea these narrow sections can be extremely dangerous; a thunderstorm could easily submerge them, putting the team in harm's way. We were able to descend to 300m below the surface, but the size of the cave was much less than what we had hoped for, and we had still failed to find an underground river. 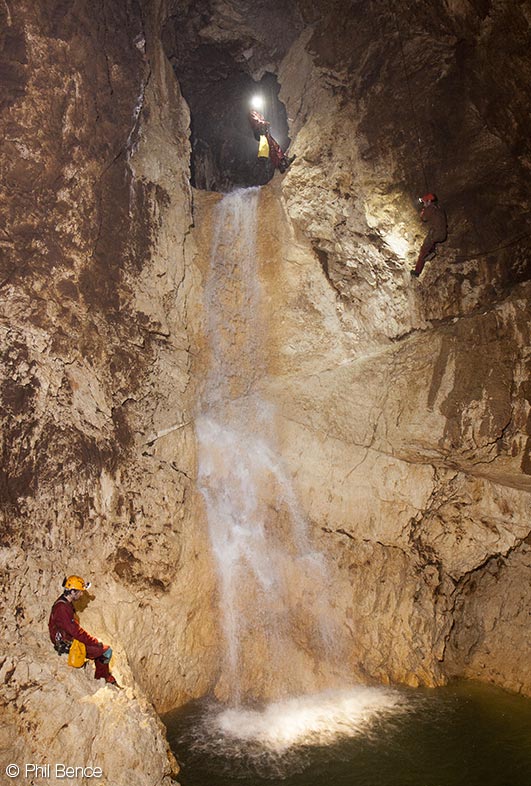 Nevertheless, we made some amazing archeological discoveries in one of the caves, including a beautiful axe carved out of flint. This fantastic find bore witness to an ancient Papuan presence in these mountains. As time moved on, everyone started to suffer, and we all came down with some sort of serious health issues: fungal infections, injuries, jungle rot, infected insect bites… It did not take long to understand why Papuans no longer live in these highlands. Caving in Papua New Guinea means being able to deal with harsh living conditions, primitive hygiene, constant humidity, and avoiding an infinite number of opportunities to hurt yourself both above ground and below. The caver here has no choice but to double as a hardy adventurer!

After cutting another trail we discovered two new entry points at 1000m elevation just one hour from our camp. They were both tiny and inconsequential, but a rising air current from the first led us to believe that there was something significant below. The other cavity widened quickly and we could see that it plunged into the depths as a wide and high meander. Our spirits rose and the real exploring began. Back in the cave that night, with smiles across each and everyone of our faces, the adventure continued. The cave had yet to widen significantly, but we continued to believe. We could hear a stream running just past a narrow section; a few swings of the hammer sufficed to provide ample passage. Once again we were 300m below the surface with several fossil galleries to explore. We bivied to save time, allowing us to descend to a large chamber 500m below the surface, and to cover a total distance of more than 2km. We had finally found what we were looking for! 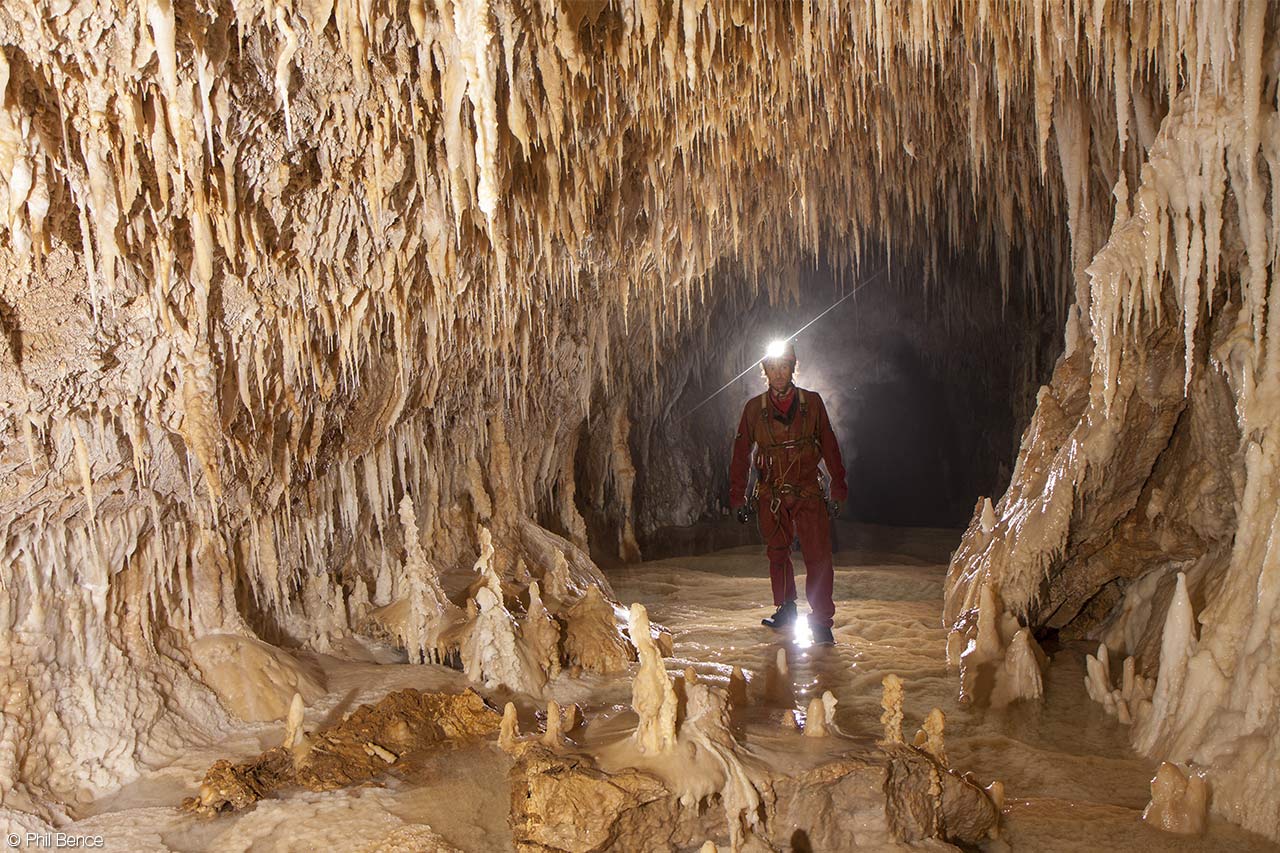 In the second cave, christened Philip Pato to pay homage to a former porter who has since passed away, the teams continued ever deeper and followed an active cave that increased in size with each step. At 500m below the surface, we finally reached a true Papuan gallery: 15m to 20m wide and just as high. The river dropped away, bringing us to a siphon at almost 600m below the surface. Bab and Guillaume passed through the 3m long water filled bottleneck behind which the gallery continued. Our delight was short-lived since only 50m further a new siphon brought this year's exploration to a screeching halt. In the end, our forays into the range produced unbelievable results, with an obvious potential for future exploration. Philip Pato cave is now the 3rd deepest cave in Papua New Guinea. Cédric and I took several hours of video of this wonderful adventure, and a film will be released sometime between now and fall 2014. To be continued!

A special thanks to our partners for their support: FFS, Petzl, Aquatab, Aventure Verticale, Béal, CDS Ariège, CDS Ardèche, CDS Paris, and the Figeac, Souillac, and Les Goulus caving clubs. 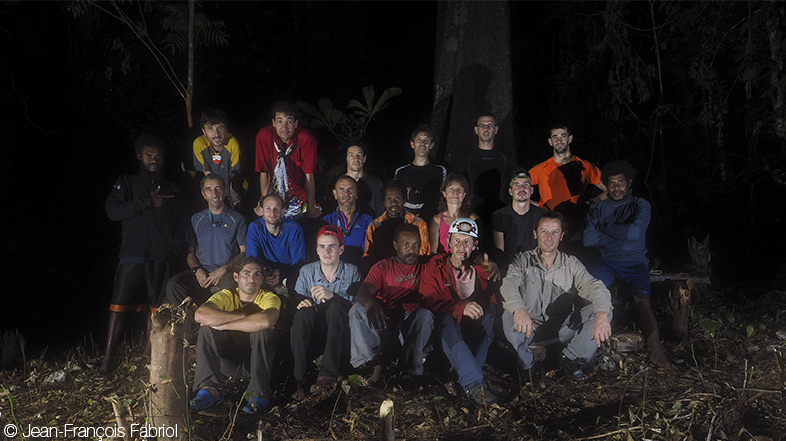