The VERSO or REVERSO must be detached and re-attached each time the rope is installed, on every pitch of the climb. The large number of manipulations during the day increases the risk of error.
Each time slack is given, the rope becomes slack, so the device and its carabiner can move about and become poorly positioned, and can remain so when the system again comes under tension.
The rope running through the carabiner can rub against the locking sleeve.
The belay/rappel system's carabiner is frequently used alone, with no possibility for redundancy. If the carabiner opens or breaks, the user will certainly fall.

The most important risks to consider

Recommendation on carabiner and accessories

• The Am’D's shape offers a good support zone for the frame of the VERSO or REVERSO
• The SCREW-LOCK system allows the carabiner to remain unlocked until both ropes are installed. Warning: ropes moving through the carabiner can rub against the sleeve and unlock it: watch for the appearance of the red visual indicator.
• The BALL-LOCK system is less sensitive to the rope rubbing against the sleeve

• Do a partner check at each connection

• Regularly monitor your belay device and the positioning of the carabiner during use, especially when it is reloaded after having been unloaded

Notes
- The ATTACHE can be used for this application. Warning: if the carabiner rotates when using larger diameter half ropes, the ropes can become damaged by the inside edges of the gate
- The TWIST-LOCK system is not recommended for this application, as the sleeve can be unlocked and the gate opened by a single motion of the rope 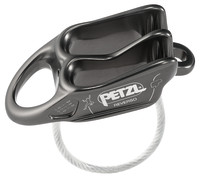 REVERSO® Versatile, lightweight belay/rappel device, for use with one or two rope strands and ability to belay a second climber from the anchor