An impact on my head slammed me down and forward. A startled yell ripped from my lungs. I had been hit by rockfall. I froze, laying against the dirty rock face in front of me, waiting to see if more rocks were coming. I tasted blood in my mouth.

This winter, my husband Derek, and I set off to climb the North Ridge of the Pfeifferhorn, an 11,326 foot pyramid of granite blocks in the Lone Peak Wilderness of Utah. For the first pitch we took the right-hand snow couloir, which started as a walk and sneakily became a snow climb. When the terrain became somewhat technical, with thin snow over rock, Derek found a good stance for a belay with a gear anchor. He tossed me the rope and brought me up to him before he did a short pitch to get to the top of the saddle. We continued on rock terrain for two more pitches.

It was after Derek led the fourth pitch that we ran into trouble. Derek had just put me on belay so I could follow the pitch. We were within easy shouting distance but not within sight of each other. As Derek tensioned the line, I positioned myself in a small, left facing corner the start of the pitch.

I had just barely stepped up when an impact on my head slammed me down and forward. A startled yell ripped from my lungs. I had been hit by rockfall.  I froze, laying against the dirty rock in front of me, waiting to see if more rocks were coming. I tasted blood in my mouth.

I called out to Derek, my voice annoyingly wobbly, “Are you okay?”

When he didn’t immediately reply I called louder, “Derek! Are you okay?”

He called back, “I’m fine, are you okay?” His tone let me know he was a bit confused.

I was pretty sure that I was, in fact, okay. I was still tasting blood, but my spit was only mildly reddened. I thought I must have just bit my tongue, but my whole mouth hurt. I hadn’t blacked out when the rock hit. At least, I didn’t think I had. But my helmet felt funny. I couldn’t feel any major cracks, but it wasn’t sitting on my head the same way.

I called up to Derek, telling him I was going to take my helmet off to look at it. He told me to keep it on and asked if I felt okay to climb. I did, so he told me to climb up to him so he could check my helmet (and my head) himself. I started climbing.

Once I got secured at the belay next to Derek, he checked me for damage. He found a dent and a scratch on my helmet from where the rock had impacted it. When I told him the helmet didn’t feel right, Derek realized that the webbing suspension on my Petzl Ecrin Roc helmet had unwound, absorbing the force of the impact. Even though we didn’t think I had any serious injuries, Derek checked my C-Spine just to be safe. He also checked my mouth and found one of my teeth chipped.

After a quick discussion, we decided we should bail off the mountain and get me to a dentist. The chipped tooth didn’t look too bad, but all of my teeth were throbbing and my neck was stiffening up. Beyond that, I was mentally taxed. I had been hit by a rock that I didn’t see or hear coming and that had me anxious.

After several rappels, some down-climbing, and a hike, we made it back to camp. At camp, we took turns hydrating and packing. Derek got some food and I attempted some Gatorade. The Gatorade stung my mouth so I went back to water. As I rubbed my tongue against my teeth, I found a second chipped tooth. Derek looked at it and discovered what appeared to be a crack in a third tooth. I mentally cringed at the dental bill to come. It was good we bailed, and it was a good thing I had been wearing a helmet. I could only imagine what shape I would have been in otherwise.

We hiked 4.5 miles out and called a dentist for an emergency visit as soon as we had cell service. The dentist was able to see me that night, at which point we discovered not just two chipped teeth but also two cracked teeth. Thankfully, all teeth have now been repaired and I have an appointment to fill a cavity that I didn’t know I had. Awesome.

Have your own helmet story to share? Email us at HelmetsMatter@Petzl.com and hashtag your photos with #HelmetsMatter! 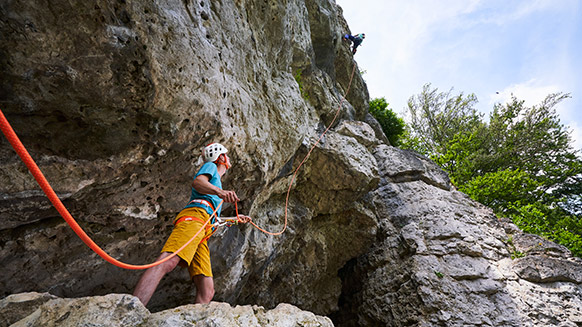 Choosing the right belay device based on the project Jorg Verhoeven has been part of Team Petzl since 2010. Originally from the Netherlands, he moved to Innsbruck, Austria, to live in the mountains. While he made a name for himself over the last 15 years competition climbing, Jorg has always sought adventure wherever he can find it, from bouldering to long multi-pitch routes. His most notable accomplishments include free ascents of longtime aid routes such as “The Nose” and the “Dihedral Wall” on Yosemite’s legendary El Capitan. In recent years, Jorg has dedicated much of his time to trad climbing, preferring to place his own protection as he moves up the rock. Whatever the style or adventure, belaying is one of the most important skills to master in climbing! Multi-pitch climbing Makatea, when solidarity and climbing join forces! How does one attempt to describe the truly unique Polynesian island of Makatea? This ring of coral shoots one-hundred meters straight up out of the ocean, has blissful turquoise-blue waters surrounding its shores, houses an incredible diversity of flora and fauna, and offers breathtaking landscapes. However, abandoned phosphate mines and equipment also paint an accurate picture of the island. Today, through a collaborative project between the non-profit Maewan and the island’s inhabitants, Makatea has been offered the chance to develop a more sustainable, ecotourism based economy through the sport of climbing. Multi-pitch climbing

Ice climbing expedition to the Himalaya In a remote valley in the Himalaya, a team of six motivated climbers decided to test their mettle on Indian ice in a place where no one else had ever dared to climb. Their project: to meet with Spiti Valley locals, put up new routes, and provide the right support to develop ice climbing in the area. Between the usual chaos of travel and the inherent complexities of ice, cameraman and photographer Austin Schmitz tells us all about the expedition. Multi-pitch climbing

Climbing an ephemeral icicle What luck to be able to enjoy one’s passion for ice climbing so close to home! Fabian Buhl, well known for his skills bouldering and multi-pitch climbing, tells us how it felt to climb a rarely formed superb piece of ice on the Seebenseefall, right in his own backyard near the Tyrolean village of Ehrwald, Austria. Multi-pitch climbing