How does one attempt to describe the truly unique Polynesian island of Makatea? This ring of coral shoots one-hundred meters straight up out of the ocean, has blissful turquoise-blue waters surrounding its shores, houses an incredible diversity of flora and fauna, and offers breathtaking landscapes. However, abandoned phosphate mines and equipment also paint an accurate picture of the island. Today, through a collaborative project between the non-profit Maewan and the island’s inhabitants, Makatea has been offered the chance to develop a more sustainable, ecotourism based economy through the sport of climbing. 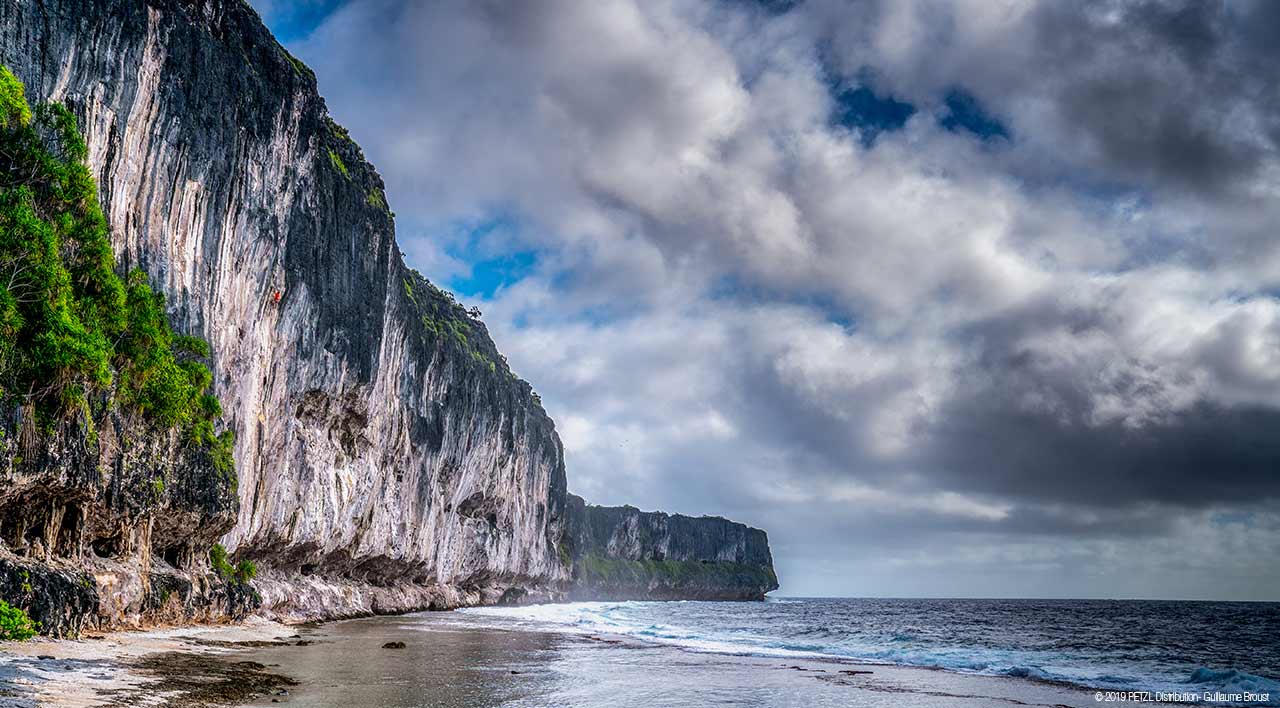 A unique geological formation, a once over-mined island

Makatea is unique. As the world’s tallest atoll, plate tectonics pushed this ring of coral more than one hundred meters up and out of the ocean.

Makatea is considered the pearl of French Polynesia, with:

However, until 1962, the island was known as Polynesia’s greatest financial resource. More than four thousand people, mostly Polynesians along with a few laborers from elsewhere, worked hard to mine the high-quality phosphate practically bursting out of this eight kilometer long island. At the time, the island and its economy grew with the massive influx of laborers, which required building key infrastructure such as a hospital and an industrial port, as well as opening stores and places to buy basic goods. Then, almost overnight, the mine closed due to the downturn in the international economy. The laborers returned home and left the remaining fifty-six permanent inhabitants with one-third of their island completely ravaged. Since the supply ships no longer made Makatea one of their stopovers, life for the islanders returned to what it once was in spite of the dramatic change. 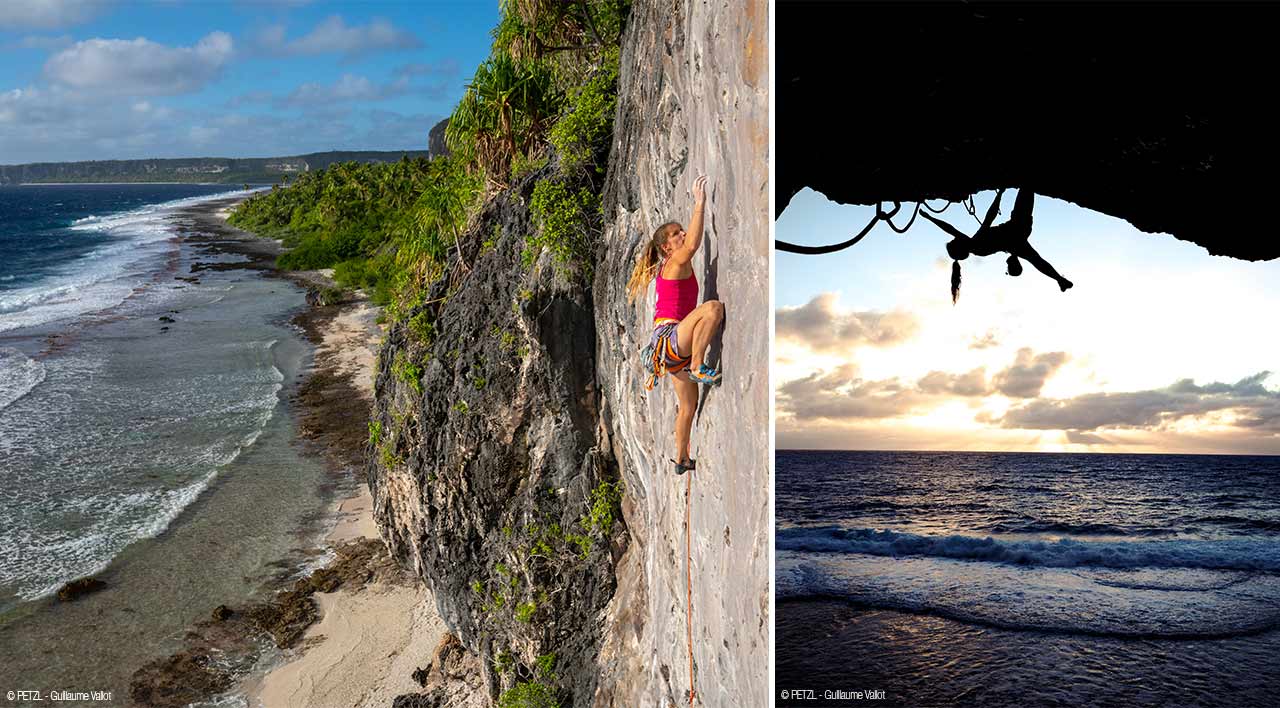 A sustainable ecotourism development project based on outdoor sports

Only recently have climbers discovered the island’s high-quality limestone cliffs and huge climbing potential. In 2018, Heitapu created “Club Makatea Escalade” (the Makatea Climbing Club) and met with members of the non-profit Maewan. The project to develop an ecotourism based on outdoor sports resulted from discussions between the climbing club, Maewan, the island’s mayor, and the general manager of Acropol, a company that specializes in work-at-height. This represented a major endeavor that needed widespread support to ensure long-term, sustainable success. In addition, vertical sports and activities require specific know-how and supervision.

The main challenge was making sure that this long-term project corresponds with what local inhabitants want and with the area’s capacity to host tourists. In addition to their buy-in, they needed to clearly understand how to take advantage of this type of growth and development. At the beginning, the locals remained skeptical.

Climbing is not a well-known sport in the islands. The non-profit Maewan presented the project to the Polynesian Ministry of Sports and Education. The ministry reviewed the proposal, became one of the project’s main partners, and authorized Maewan to organize workshops in local Polynesian schools. Subsequently, in Makatea, Maewan held workshops for school kids to teach them about their island’s rare and fragile natural environment, how to manage local drinking water resources, and how to deal with pollution. In addition, the goal was to encourage them to learn and to enjoy climbing by meeting climbers from around the world. 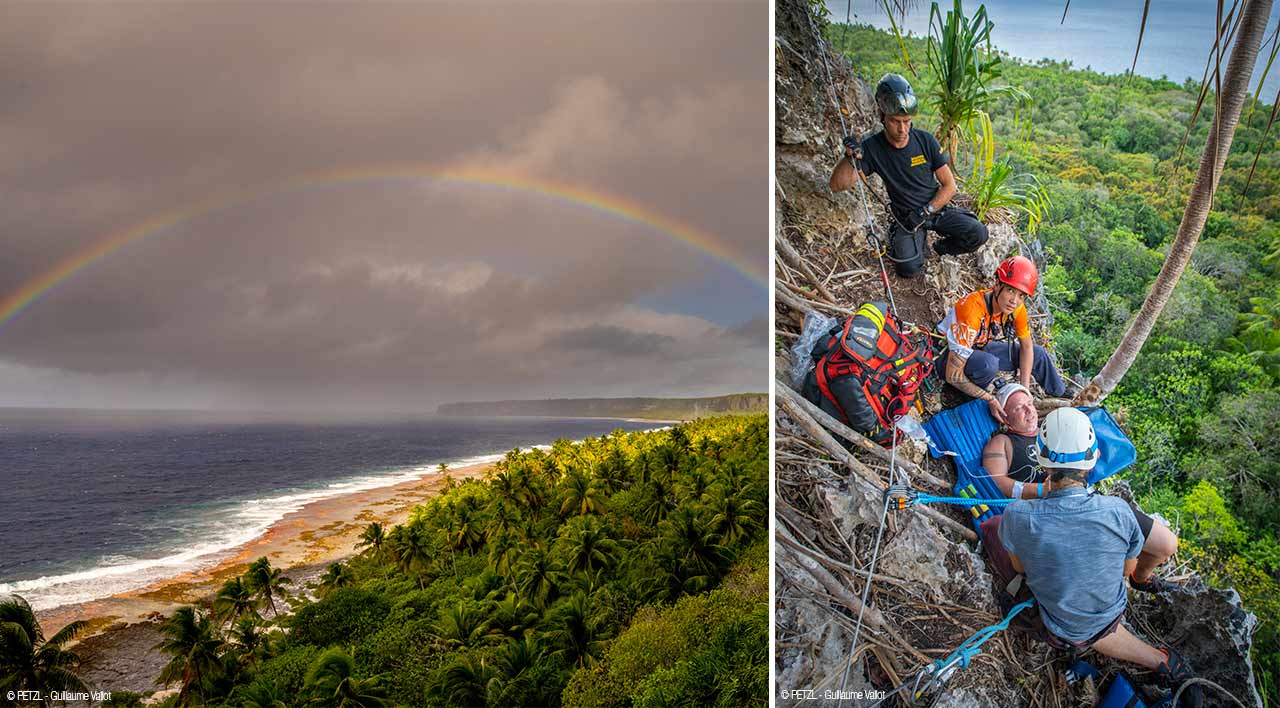 The tourism board and post office became involved. And Polynesian telecommunications services even installed a cell tower. Climbing brands also joined the project. Petzl, for example, has played a key role in explaining how to monitor and deal with corrosion-related issues, provided technical support, and trained members of Makatea Escalade. The brand’s non-profit foundation set up a rescue protocol, provided additional training, and supplied rescue equipment.

For climbing area and route development, an international team of climbers from all over the world joined the fray. The crags needed to offer routes for every level and ability. They spent time with the villagers to discuss which areas to develop and which areas were off limits: certain cliffs contain ancient tombs and are sacred, others house birds endemic to the island, and others are located within a coconut tree grove where locals harvest coconuts. The choices were made based on the villagers’ feedback and wishes. Since safety is a high a priority, ease of rescue was factored into the equation when deciding where to put up each new route and anchor. Four climbers from Makatea Escalade took a rescue training course with Polynesian emergency services, and the latter now provides support through a new local satellite office on the island. 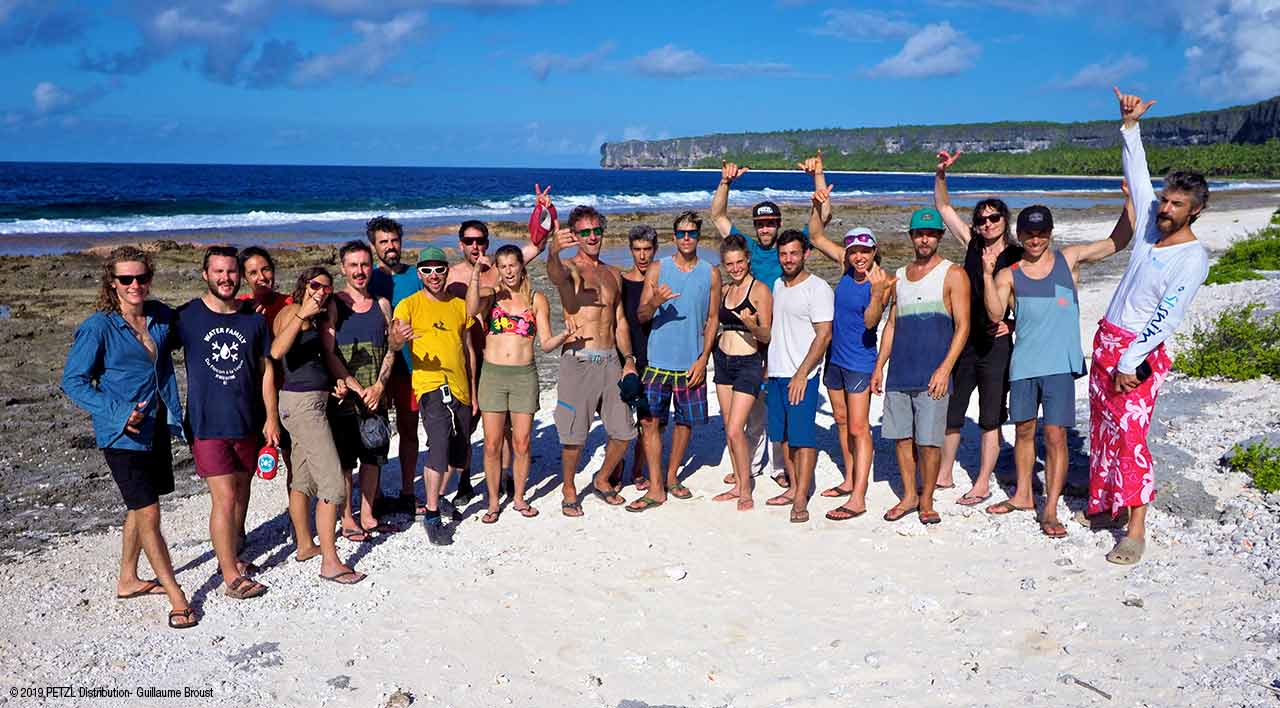 A promising start for the future

While in Makatea developing new routes, the project team bonded with the locals. Nevertheless, a portion of the population still failed to see the interest in making such a colossal effort, or simply did not believe in the potential. Several information meetings were held to discuss the project with them and answer any questions. It was important to explain why their island, familiar enough to them to the point of being mundane, is so extraordinary and special. All of the villagers were encouraged to participate in the project. Certain individuals received training on how to properly monitor the fixed gear and maintain each climbing area. Little by little, their doubts subsided. Small stands selling local produce and artisanal products were set up, and everyone worked together to build the campground that would host the two hundred Polynesians who planned to attend the first event.

The kickoff event turned out to be an overwhelming success, and all of the participants were simply blown away by the hospitality and the island, while enjoying a variety of outdoor sports and guided tours of the old phosphate mine. At the final gathering with the entire village, everyone expressed their clear understanding and approval of this sustainable ecotourism development project based on outdoor sports. They even started talking about the event’s second edition; icing on the cake after all of the hard work to put the project in motion.

With ear-to-ear smiles on their faces, Maewan's crew raised anchor and set sail on a bearing due south, in search of new encounters and adventures. The non-profit will continue to provide support to Makatea Escalade by looking for new partners that will help locals write the next chapter in this exciting new story. 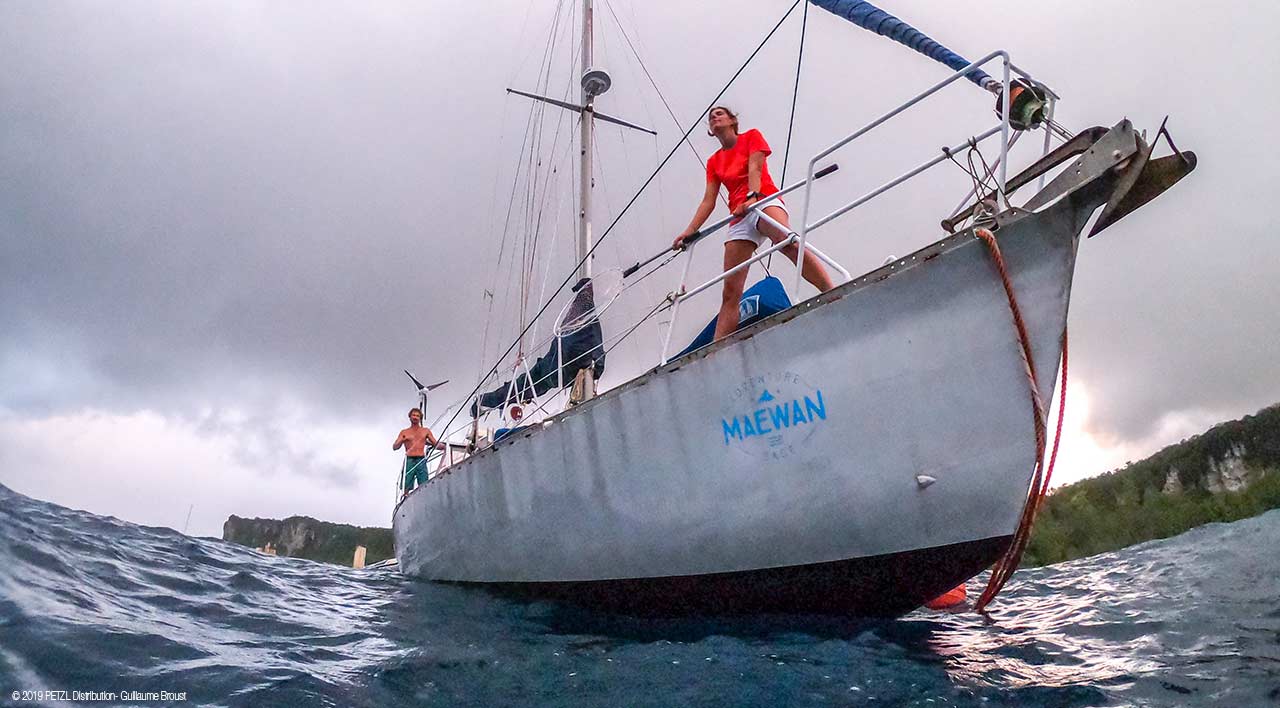 GRIGRI® Belay device with assisted braking for a broad range of single rope diameters (8.5 to 11 mm) 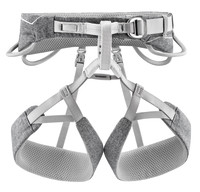 SAMA Climbing harness for climbing in a gym, at a crag, or on multi-pitch routes

Choosing the right belay device based on the project Jorg Verhoeven has been part of Team Petzl since 2010. Originally from the Netherlands, he moved to Innsbruck, Austria, to live in the mountains. While he made a name for himself over the last 15 years competition climbing, Jorg has always sought adventure wherever he can find it, from bouldering to long multi-pitch routes. His most notable accomplishments include free ascents of longtime aid routes such as “The Nose” and the “Dihedral Wall” on Yosemite’s legendary El Capitan. In recent years, Jorg has dedicated much of his time to trad climbing, preferring to place his own protection as he moves up the rock. Whatever the style or adventure, belaying is one of the most important skills to master in climbing! Rock climbing 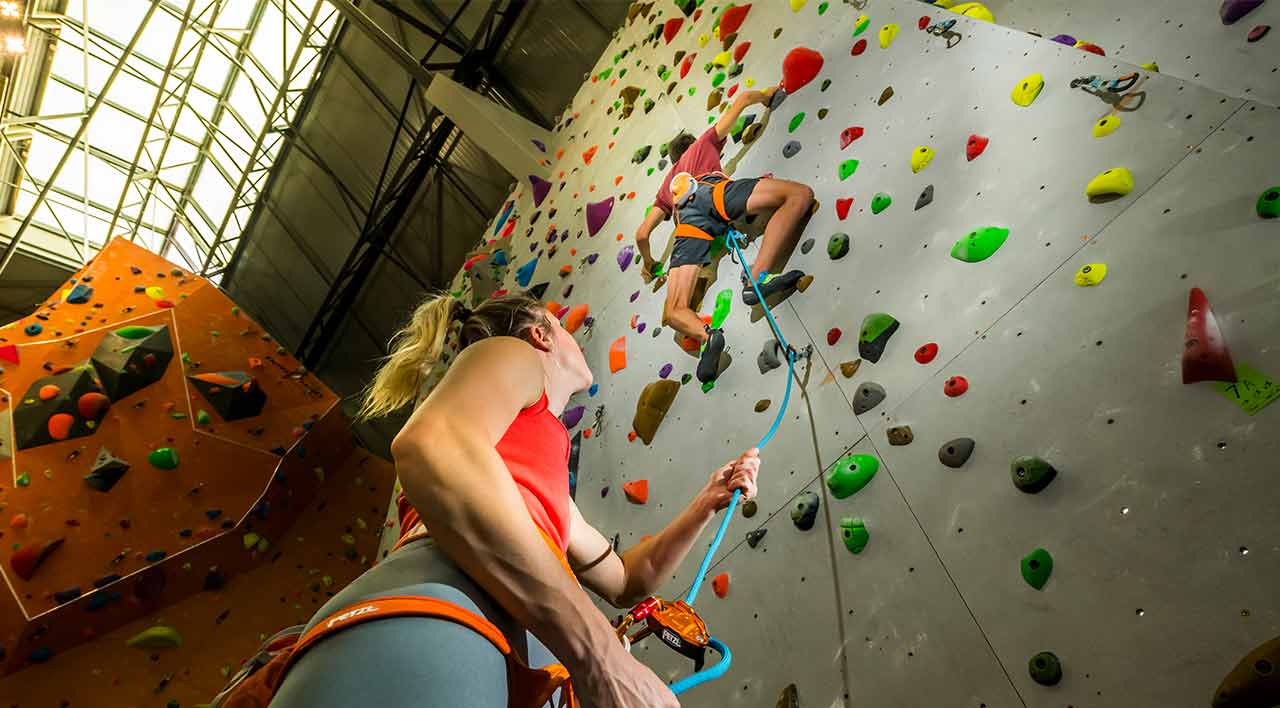 For everyday climbing, put it all in the same pack! “I was born in a climbing gym!” From the very beginning, climbing has been a part of Julia Chanourdie’s life. Early on, she started competing and then winning, so she decided to dedicate her life to the sport by becoming a professional climber. Julia climbs at both the gym and the crag. Switching back and forth between pulling on plastic and climbing on real rock allows her to have fun while working on ever more difficult routes to send. In both cases, whether indoors or outside, conducting a partner check is absolutely essential. Today, Julia takes the time to explain how she proceeds. Rock climbing