Accompanied descent rescue with the I'D

In case of a work emergency, a rapid evacuation solution for a single victim is an accompanied descent done by a co-worker.

For improved control, the rope must pass through a braking carabiner.

Above 200 kg, tests have shown that descent control becomes very difficult, and unforgiving of any operator error or incident during the operation.

Consequently, if the workers at a job site weight more than 100 kg, the rescue plan should not include evacuation by accompanied descent with the I'D.

Another rescue strategy should be developed, for example installing the ropes on releasable anchors. 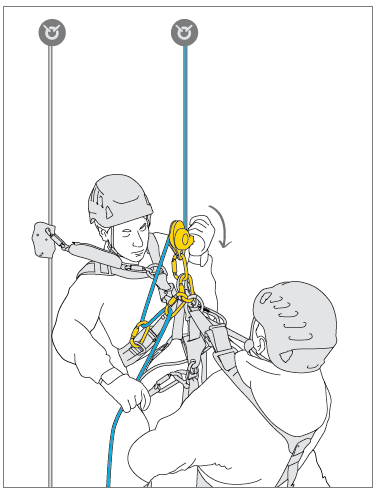 If, despite all precautions taken, an exceptional and unforeseen emergency requires you to perform an accompanied descent on your I'D S with a 200 - 250 kg load: